In my previous blog post I introduced Al the principal, as part of a mnemonic to help distinguish principal from principle. Here is another Al, not imaginary this time, but more mysterious. If he was a chef at this restaurant, or its owner, there might be an acceptable pun in this sign, but as a misspelling for À it doesn’t cut the mustard. 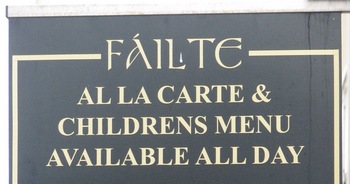 À la is short for à la mode de, which means “in the manner of” or “in the style of”. U.S. English often drops the grave accent (`). In French the preposition is followed by a feminine noun (the masculine form is au, a contraction of à + le), but as an English compound preposition it is independent of gender:

À la carte roughly means “by the card” or “according to the menu”, and implies that the customer can select from a choice of items, each of which is priced separately — as distinct from a menu with set meals and fixed prices (table d’hôte or prix fixe). The phrase may act as a noun, i.e. as shorthand for an à la carte menu or meal, but its adjectival and adverbial uses seem more common — an impression borne out by a search at the British National Corpus).

À la was first used in English at the end of the 16th century, while à la carte appeared in 1826. The latter is one of many food-related à la… phrases imported from French and now thoroughly integrated into English. Sometimes à la carte has nothing to do with food. Neither à la nor à la carte needs to be italicised; I do so here only when discussing them in the context of their usage.

The widespread use of à la and à la carte makes one wonder how the misspelling “Al la carte” arose. An apostrophe is missing from “childrens”, and there is a strong case for making “menu” plural, but these lapses are so frequent in signs as to be mundane; it is the appearance of “Al” that makes it irresistible.

This entry was posted on Wednesday, April 8th, 2009 at 1:51 pm and is filed under phrases, signs, spelling. You can follow any responses to this entry through the RSS 2.0 feed. You can leave a response, or trackback from your own site.