Sometimes a back-formation arises through the assumption that it must already exist, and that its source word is the derivative term. Such an assumption, while misguided, is altogether reasonable, being based on a summary analysis of the source word’s morphology. Consider donation. You might think it derives from donate, but the noun is several centuries older; donate is the back-formation. You are unlikely to recognise a back-formation just by looking at it. 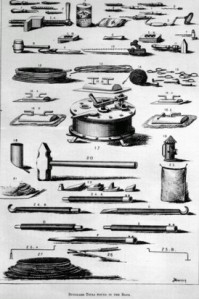 Another everyday example is burgle, a back-formation from burglary. In U.S. English, burglarize (or -ise) is by far the more common verb, but burgle dominates in British English. That burgle has failed to take hold in U.S. English may be partly a result of its lowly origins as a back-formation, as well as its funny phonetic blend of burble and gurgle. But whatever the reasons, I wouldn’t call it “hideous”. Back-formations are not inherently wrong, but they can be redundant; before you use one that seems new or gimmicky, check if there is a standard alternative. [Image: burgling tools. Or are they burglarizing tools?]

Back-formations are frequently made by dropping -tion or -ion from a noun, and adding -e when appropriate, to form a new verb, such as donate from donation. From evolution we get evolute, which has technical meanings as a noun in mathematics and as an adjective in botany, but as a verb meaning the same as evolve, it is a needless variant. Similarly superfluous are cohabitate for cohabit, interpretate for interpret, and solicitate for solicit. Solicitate has a standard adjectival use; it is only its unnecessary use as a verb that I advise against. Last week I heard someone on the radio say installating, as if he had forgotten all about install. But some of these may eventually become standard, even installate.

In most of the examples I’ve included so far, the change has occurred at the end of the word, i.e. the removed affix has been a suffix. Back-forming by removing prefixes is less common, except in humorous contexts such as Jack Winter’s “How I met my wife”, which boasts a litany of deliberately malformed terms like chalant, ept, and peccable.

Regardless of how back-formations are formed, they are often initially considered to be irregular, even ignorant, and suitable only for informal use in slang or jokes. Sometimes, as we have seen, there is no need for them because the semantic niche they purport to inhabit has already been filled. Other back-formations, such as enthuse and liaise, inhabit a grey area of acceptability. And then there are many that serve a useful purpose and have become standard. Here are some I haven’t mentioned already:

automate from automation
beg from beggar
diagnose from diagnosis
drowse from drowsy
edit from editor
execute from execution
free associate from free association
grovel from grovelling (or -l-) (adj.)
injure from injury
intuit from intuition
kidnap from kidnapper
orate from oration
pea from pease
peddle from peddler
reminisce from reminiscence
resurrect from resurrection
scavenge from scavenger
self-destruct from self-destruction (from destroy, destruction)
sleaze from sleazy
statistic from statistics
surveil from surveillance
televise from television
vaccinate from vaccination
window-shop (v.) from window-shopping

This entry was posted on Tuesday, April 28th, 2009 at 2:44 pm and is filed under etymology, language, morphology, words. You can follow any responses to this entry through the RSS 2.0 feed. You can leave a response, or trackback from your own site.