Whitehead and the modern word

Here is an excerpt from Alfred North Whitehead’s Science and the Modern World:

Each generation criticises the unconscious assumptions made by its parents. It may assent to them, but it brings them out in the open.

The history of the development of language illustrates this point. It is a history of the progressive analysis of ideas. Latin and Greek were inflected languages. This means that they express an unanalysed complex of ideas by the mere modification of a word; whereas in English, for example, we use prepositions and auxiliary verbs to drag into the open the whole bundle of ideas involved. For certain forms of literary art – though not always – the compact absorption of auxiliary ideas into the main word may be an advantage. But in a language such as English there is the overwhelming gain in explicitness. This increased explicitness is a more complete exhibition of the various abstractions involved in the complex idea which is the meaning of the sentence.

Whitehead not only had interesting ideas, he also expressed them in interesting ways. A close reading of the quoted material reveals at once its exemplary plainness. Short sentences alternate with moderately long ones, and each point arises naturally from the previous one, with partial repetition for emphasis and lucidity. Technical words are made clear by their context, common words are used whenever appropriate, and abstractions are tied to everyday experience.

Science and the Modern World is a collection of essays adapted from lectures which Whitehead wrote at the rate of one a week — “at white heat”, as his wife put it. In Dialogues of Alfred North Whitehead, recorded and edited by Lucien Price, Whitehead revealed that he did not rewrite much, but that he wrote very slowly and elided a great deal. He also said: “I do not think in words. I begin with concepts, then try to put them into words, which is often very difficult.”

I found the book, a Pelican edition, at the wonderful Charlie Byrne’s bookshop for the absurdly generous price of €1. Curiously, it is titled Science and the Modern World on the inner title page and in the headers throughout the text, but not on the front cover, where an ampersand replaces the word and, thus demonstrating the general interchangeability of these symbols. 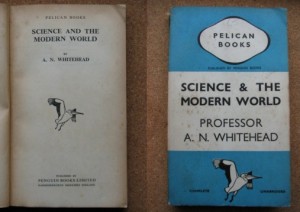 This entry was posted on Friday, May 15th, 2009 at 1:44 pm and is filed under books, literature, writing. You can follow any responses to this entry through the RSS 2.0 feed. You can leave a response, or trackback from your own site.

5 Responses to Whitehead and the modern word