Earlier this year there was a minor media flurry about the English language supposedly attaining its millionth word. This (non-)event, which was dragged out for a few years, was such raiméis that I decided not to write about it at all, apart from a curt dismissal on Twitter. However, it did serve some useful purposes. For one thing, it prompted many interested parties – amateurs and academics alike – to write thoughtful criticisms. It got people writing, talking, and thinking about language. It also showed the extent of credulity or cynicism, or both, in many commercial news organisations. Shocking, I know.

I could get carried away posting hyperlinks to worthwhile criticisms of the project (or ‘publicity stunt’, if you prefer), but out of mercy for my readers I’ll limit the links to a handful, each of which I heartily recommend: Ben Zimmer, Jesse Sheidlower, Grant Barrett, Michael Covarrubias, and David Crystal, whose post attracted a response from the man behind the millionth-word shenanigans. Language Log, an outstanding linguistics blog, covered the pseudo-event in considerable detail. To one of those posts, written by Zimmer, I added a comment with an excerpt from James A. H. Murray’s introduction to the first volume of the original Oxford English Dictionary. The main purpose of this post is to repeat that excerpt here on Sentence first. 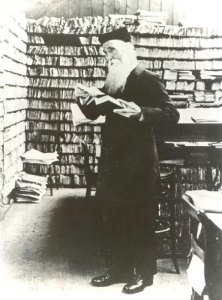 Before that, though, a few words about Murray (pictured, in his Scriptorium). It is possible that no one else could have done the job he did; it is almost certain that no one could have done it so well and with such commitment to quality over haste. He embodied a rare combination of knowledge, ability, temperament and dedication that made him ideal for the job, though over its many years he had more than occasional cause to doubt his suitability for it and the probability of its eventual completion.

As well as being as great lexicographer, Murray was a polymath whose keen interests included astronomy, botany, archaeology, mathematics and geology. These interests prepared him well for the decades he spent working on the OED. They gave him expertise in a wide range of subjects, which enabled him to draw useful analogies between different disciplines. This is beautifully apparent in the excerpt below. As his granddaughter K. M. Elisabeth Murray wrote in Caught in the Web of Words, “because he never compartmentalised his interests, he never missed seeing something because he had allowed himself to become preoccupied with another line of research.”

Here is Murray’s own diagram of the structure of the English vocabulary, followed by his exceptionally lucid explanation of it.

The centre is occupied by the ‘common’ words, in which literary and colloquial usage meet. ‘Scientific’ and ‘foreign’ words enter the common language mainly through literature; ‘slang’ words ascend through colloquial use; the ‘technical’ terms of crafts and processes, and the ‘dialect’ words, blend with the common language both in speech and literature. Slang also touches on one side of the technical terminology of trades and occupations, as in ‘nautical slang’, ‘Public School slang’, ‘the slang of the Stock Exchange’, and on another passes into true dialect. Dialects similarly pass into foreign languages. Scientific terminology passes on one side into purely foreign words, on another it blends with the technical vocabulary of art and manufactures. It is not possible to fix the point at which the ‘English Language’ stops, along any of these diverging lines.

The Vocabulary of a widely-diffused and highly-cultivated living language is not a fixed quantity circumscribed by definite limits. That vast aggregate of words and phrases which constitutes the Vocabulary of English-speaking men presents, to the mind that endeavours to grasp it as a definite whole, the aspect of one of those nebulous masses familiar to the astronomer, in which a clear and unmistakable nucleus shades off on all sides, through zones of decreasing brightness, to a dim marginal film that seems to end nowhere, but to lose itself imperceptibly in the surrounding darkness. In its constitution it may be compared to one of those natural groups of the zoologist or botanist, wherein typical species forming the characteristic nucleus of the order, are linked on every side to other species, in which the typical character is less and less distinctly apparent, till it fades away in an outer fringe of aberrant forms, which merge imperceptibly in various surrounding orders, and whose own position is ambiguous and uncertain. For the convenience of classification, the naturalist may draw the line, which bounds a class or order, outside or inside of a particular form; but Nature has drawn it nowhere. So the English Vocabulary contains a nucleus or central mass of many thousand words whose ‘Anglicity’ is unquestioned; some of them only literary, some of them only colloquial, the great majority at once literary and colloquial,- they are the Common Words of the language. But they are linked on every side with other words which are less and less entitled to this appellation, and which pertain ever more and more distinctly to the domain of local dialect, of the slang and cant of ‘sets’ and classes, of the peculiar technicalities of trades and processes, of the scientific terminology common to all civilized nations, of the actual languages of other lands and peoples. And there is absolutely no defining line in any direction: the circle of the English language has a well-defined centre but no discernible circumference.

This entry was posted on Saturday, July 11th, 2009 at 8:03 pm and is filed under language, lexicography, philology, words. You can follow any responses to this entry through the RSS 2.0 feed. You can leave a response, or trackback from your own site.

16 Responses to No discernible circumference