Two caveats: the law is not my strong point, and structure is not this post’s strong point – I wrote it in a hurried state of discombobulated semi-disbelief – so corrections and points of information are welcome. 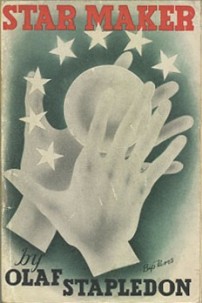 In 1937, British historian and philosopher Olaf Stapledon published a science fiction novel called Star Maker. It is a book so imaginative, thoughtful and beautifully written that the great wonder is that it never achieved the same public renown as the works of, say, Jules Verne, H. G. Wells or Arthur C. Clarke. Certainly Star Maker is acclaimed as a masterpiece of science fiction, but its crossover success has been limited: it does not seem to be widely read by people who are not fans of the genre. (I would love to hear reports to the contrary.)

I was recently reminded of Stapledon’s story by the exasperating senselessness of those who saw fit to criminalise blasphemy in Ireland. As the Defamation Bill staggered through the Oireachtas (Irish national parliament), John Naughton examined the constitution of what he called a “backward statelet”, Bock described it as among other things a waste of the Garda Síochána’s time, Jason Walsh offered further analysis and historical context, and Martyn Turner’s satirical cartoons encapsulated the absurdity. In the Irish Times, Eoin O’Dell explained the bill’s dubious constitutionality; in the Guardian, Padraig Reidy observed that “Irish law has now enshrined the notion that the taking of offence is more important than free expression.” Despite an eleventh-hour twist and the best efforts of a newly formed lobby group, the defamation bill was passed today, including the aforementioned provisions on blasphemous libel. The links above are but a small selection of the critical commentary on the matter.

It seems to me that it would be difficult for this law, in its disconnect from common sense and its confusion of the metaphysical map for the territory, to miss the point by a wider margin. It invites overreactions far more consequential than the protest sign (right) wielded at the 1979 launch of Monty Python’s Life of Brian. The notorious comedy classic, which was banned from theatrical release in Ireland for some years, did not cheapen Jesus (or his mother) any more than it set out to, i.e., not at all. Rather it poked fun at the misrepresentation of his teachings and at some of his followers’ fanatical adherence to arbitrary elements of this misrepresentation.

The point being that you have to laugh at these things, and you should have the right to laugh at them, even unkindly, without fear of legal reprisal. As Grandad had it, “God” would be offended by the very idea that people think “he” could be offended. So long as blasphemy does not incite hatred or public disorder, it is a matter for the private conscience; it should not be subordinate to the hypersensitive literalism of fundamentalists of any persuasion, least of all large groups of them with flaming torches or cynical lawyers. 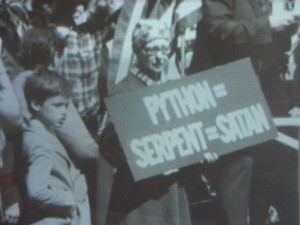 Hence the importance of irreverence. As I remarked elsewhere: to the truly religious (by which I don’t mean Catholic, or even deist, but I’ll not get into that), everything, including blasphemy, is surely both sacred and silly at once. To take symbols literally – to become fixated on mere interpretations of a putative ultimate truth – risks missing the sublime cosmic joke. This literalism is exemplified by another sign protesting Life of Brian (above right). Sometimes the less sure people are about something, the more sure about it they like to feel. This is a natural defensive reaction, but a dangerous one. So why legislate for it?

The search for truth, and the communication of what one finds, have long been the source of much debate in scientific philosophy, and much inspiration and tension in great art. Which brings me back on track, and not a moment too soon. Looking back over Star Maker I saw page after page that rang eerily true. Stapledon knew the human race was in desperate trouble, and he knew some of the reasons for our predicament.

In light of all else that is going direly wrong around the world, Ireland’s defamation bill is minor by comparison, but this does not make it ignorable. But rather than prolong another meandering rant, I will share an excerpt from Stapledon’s novel. His prose is so much finer than mine, and in the following lines about a race of “Other Men” on a distant planet there is much that could apply to the institutional greed, moral corruption and general confusion in contemporary Ireland. Behind the self-assured exterior lie familiar old uncertainties for which no amount of bluster can compensate.

(A note on Star Maker: the “Other Men” have a highly developed sense of taste, comparable in strength to our sense of sight, hence the references to flavour.)

…the officially organized “irreligion” was becoming a religion in all but name. It had its institutions, its priesthood, its ritual, its morality, its system of absolution, its metaphysical doctrines, which, though devoutly materialistic, were none the less superstitious. And the flavor of deity had been displaced by the flavor of the proletariat.

Religion, then, was a very real force in the life of all these peoples. But there was something puzzling about their devoutness. In a sense it was sincere, and even beneficial; for in very small personal temptations and very obvious and stereotyped moral choices, the Other Men were far more conscientious than my own kind. But I discovered that the typical modern Other Man was conscientious only in conventional situations, and that in genuine moral sensibility he was strangely lacking. Thus, though practical generosity and superficial comradeship were more usual than with us, the most diabolic mental persecution was perpetrated with a clear conscience. The more sensitive had always to be on their guard. . . .

Another perplexing fact about the religious life of the Other Men at the time of my visit was this. Though all were devout, and blasphemy was regarded with horror, the general attitude to the deity was one of blasphemous commercialism. Men assumed that the flavor of deity could be bought for all eternity with money or with ritual. Further, the God whom they worshipped with the superb and heart-searching language of an earlier age was now conceived either as a just but jealous employer or as an indulgent parent, or else as sheer physical energy.

The full text of Olaf Stapledon’s book is available at Project Gutenberg of Australia.

This entry was posted on Thursday, July 23rd, 2009 at 3:12 pm and is filed under Ireland, news, politics. You can follow any responses to this entry through the RSS 2.0 feed. You can leave a response, or trackback from your own site.

5 Responses to Their puzzling devoutness