In praise of cormorants

This sculpture by John Coll is one of my favourite pieces of street art in Galway. Anyone who has spent time in the city will appreciate the iconographic status of the resident cormorants drying their wings in the Atlantic breezes. (Sometimes the sun even comes out to help.)

The cormorant, or Great Cormorant, is a large, dark, and striking water bird (70–100 cm; wingspan 120–160 cm) with webbed feet and a hook-tipped bill of medium length. Its long neck and well-adapted vision makes it an excellent fisher.

I like watching them dive, and trying to guess where they’ll re-emerge. (I never can.)

Cormorants’ plumage is mostly lustrous black, with a green, brown or blue sheen; they have a bare spot on the throat, and, in summer, a white patch on their thighs. At least one bird website considers them “rather ugly“, but this seems to me an unfair and absurd judgement.

They are strong swimmers and impressive divers; indeed, their fishing ability has often brought them into conflict with fishermen. Judged for their appearance and appetite alike! 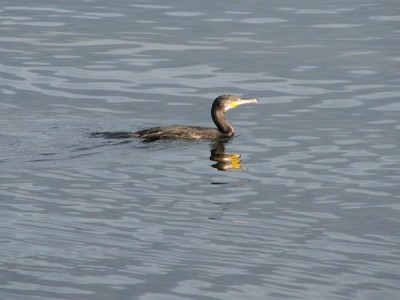 Cormorants’ reputation for voracity may explain the adjectival use of cormorant to mean greedy or rapacious, along with the word’s figurative use as a noun meaning “an insatiably greedy person or thing”. Cormorant comes from Old French cormareng, from medieval Latin corvus marinus, meaning “sea-raven”.

Its Irish name is broigheall (translation and alternatives here) and its marvellous technical name is Phalacrocorax carbo. (The shag, a smaller relative, is known as Phalacrocorax aristotelis.) 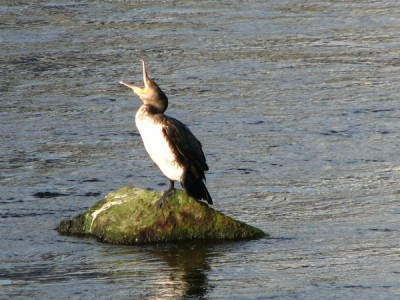 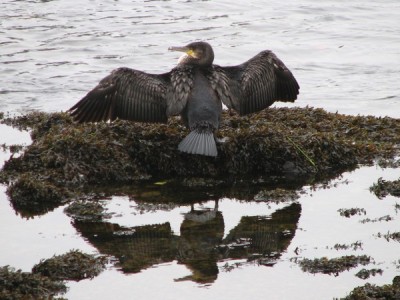 It’s thought that cormorants’ “partially wettable” plumage enables them to swim low in the water, i.e. by reducing buoyancy, and that their familiar open-winged stance helps them dry their feathers. Even with wet wings, though, they can become airborne surprisingly quickly, albeit laboriously.

Cormorants breed in colonies on rocky shores, cliffs and islands, and inland (on trees) near lakes, estuaries and rivers. They lay three to four eggs in a nest of seaweed or twigs. 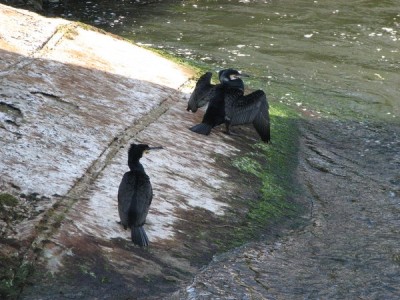 This entry was posted on Friday, October 9th, 2009 at 3:18 pm and is filed under Ireland, nature, photography. You can follow any responses to this entry through the RSS 2.0 feed. You can leave a response, or trackback from your own site.

9 Responses to In praise of cormorants