Here’s a strange one. The Awl, a website of news, culture and opinion, complained this week about the Paris Review’s use of the word snuck, a variant of sneaked. The Awl‘s post linked to an earlier one called “The Awful Rise of Snuck”, complete with a we’re-being-funny-but-really-we-mean-it tag: “it is sneaked bitches”. (Bear in mind that The Awl’s motto, Be Less Stupid, is “intended with some humor”.)

The Online Etymology Dictionary dates sneak to 1560 and says it may have been formed from Middle English sniken, from proto-Germanic *sneikanan (q.v. snake). Sneak’s etymology “seems to be within reach, but at every step something goes wrong”. Snuck came later — in the late 19C. — yet the origins of both words are, in Robert Burchfield’s phrase, “shrouded in mystery”. From his new edition of Fowler’s:

First recorded in the 16C., [sneak] seems to have emerged from some uncharted dialectal area and made its way swiftly into the language of playwrights . . . . Just as mysteriously, in a little more than a century, a new past tense form, snuck, has crept and then rushed out of dialectal use in America, first into the areas of use that lexicographers label jocular or uneducated, and, more recently, has reached the point where it is a virtual rival of sneaked in many parts of the English-speaking world. But not in Britain, where it is unmistakably taken to be a jocular or non-standard form. . . . What the future holds for snuck is unpredictable.

The shift from sneaked to snuck is unusual: when verb endings change, they usually go from strong to weak. (Dig, string, and dive are other examples of weak-to-strong drift.) Burchfield points out that no other English verb with an –eek or –eak ending makes a past tense –uck; he lists creak, freak, leak, peak, peek, reek, seek, squeak, streak, wreak, and shriek.

Yet the rise of snuck has been swift and irresistible. Comparing a few dictionary entries, because it’s fun and fascinating, we find broad recognition of snuck‘s growing popularity and acceptability (which Merriam-Webster has tracked in detail), along with some geographical notes. First, a sneaky photographic interlude: 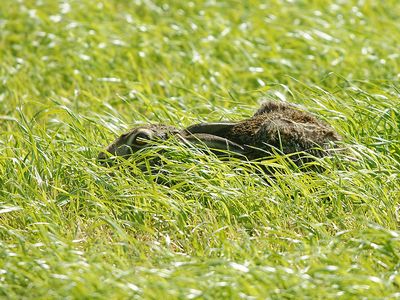 European hare being sneaky in the long grass

snuck occurs frequently in Standard English, though it is still sometimes limited in the most Formal Edited English

past and past participle snuck has risen to the status of standard and to approximate equality with sneaked. It is most common in the United States and Canada but has also been spotted in British and Australian English.

Bryan Garner’s Dictionary of Modern American Usage (1998 — I’ll update this if the new edition has a revised judgement):

snuck is a nonstandard past tense and past participle of sneak common in American dialectal and informal speech and writing. The standard past form is sneaked. Surprisingly, though, snuck appears half as often in American writing as sneaked

Widespread use of snuck has become more common with every generation. It is now used by educated speakers in all regions. Formal written English is more conservative than other varieties, of course, and here snuck still meets with much resistance. Many writers and editors have a lingering unease about the form, particularly if they recall its nonstandard origins. And 67 percent of the Usage Panel disapproved of snuck in our 1988 survey. Nevertheless, an examination of recent sources shows that snuck is sneaking up on sneaked. Snuck was almost 20 percent more common in newspaper articles published in 1995 than it was in 1985. Snuck also appears in the work of many respected columnists and authors

Update: The fifth edition (2016) of the American Heritage Dictionary shows a dramatic swing in favour of snuck:

Widespread use of snuck in the United States has become more common with every generation. It is now used by educated speakers in all regions and was acceptable to 75 percent of the Usage Panel in our 2008 survey. This stands in marked contrast to the 67 percent that disapproved of snuck twenty years earlier. The more traditional form sneaked, which predominates in British English, is fully acceptable as well, with 90 percent approving it in 2008.

[snuck] is not so common in highly formal or belletristic writing, where sneaked is more likely to occur. Snuck is the only spoken past tense and past participle for many younger and middle-aged persons of all educational levels in the U.S. and Canada. Snuck has occasionally been considered nonstandard, but it is so widely used by professional writers and educated speakers that it can no longer be so regarded.

To which the prescriptivist grammarian James J. Kilpatrick reacted by “beseech[ing] your assistance”

in preserving “sneaked” as the past tense of “sneak.” [Random House’s] tolerant view has not snuck up on me; it has sneaked up on me. I will have none of it. To my ear, “snuck” has a jocular sound. It has none of the scary, stealthy, furtive ring of “sneaked.” In a word, it doesn’t sound sneaky. Harumph!

Apparently, we can’t have words sounding jocular; and once jocular, always jocular. Kilpatrick’s sense that snuck doesn’t sound sneaky is just a personal feeling, one that contrasts with Roy Blount’s, below. Such feelings are fine, but they’re subjective and shouldn’t be imposed on the population at large. There’s also flat-out disapproval in this article in Time magazine:

because many people wrongly consider the past tense of sneak to be snuck (instead of sneaked), the word has been promoted from “chiefly dialect” in RHD-I to full respectability here

Grammar Girl kindly alerted me to her video about the controversy, but I can’t agree with her assessment that in Britain, sneaked is “the only proper past tense form”; searches on the Times and Guardian websites indicate otherwise, as does the word’s inclusion in several books cited by the British National Corpus.

There’s no guidance in the style guides at the Times or Guardian, or at the Economist for that matter. The AP Stylebook advises the use of sneaked — “Do not use the colloquial snuck” — but that’s hardly surprising. At Wordnik, snuck appears on both “Ugly” and “Favourite Verbs and Verb Forms” lists.

The word is clearly contentious, but there is no sound justification for dismissing it outright in semi-formal contexts — it’s probably ill-suited to some, but for how much longer? If anything, sneaked may be doomed: I’ve read a lot of comments saying it sounds wrong or weird.

All of which makes the fuss over snuck seem increasingly misplaced. From John Jeremiah Sullivan’s witty response to The Awl on the Paris Review blog:

It ought to go against any writer’s grain when people try to pass off schoolmarmish grammarianism as a concern for style. . . . [A] person needs to be objecting to a word on some grounds—that it’s inexact or obscure, that it’s confusing or unbeautiful. What is The Awl’s problem with snuck? As far as one can tell, somebody told them at some point that it was preferable to use sneaked. Why, though? We’ve been saying and writing snuck for at least a hundred and twenty-five years now, in high and low contexts. Everybody knows exactly what it means.

Which brings us nicely to Language Log, where late last year Mark Liberman posted an example of extreme snuck-peeving complete with a strict-teacher reference (“My fifth-grade teacher, Miss Klock, would be spinning in her grave”), before plotting the snuck-ward trend in several corpora and newspapers. Geoff Nunberg, in a comment to the post, guesses that

the spread of snuck, if not its inception, owed something to a perception of it as a humorous regionalism that was somehow morphologically apt: as Roy Blount said in a comment on his usage panel ballot: “I like ‘snuck’ — it’s sneakier.”

In conclusion, then, The Awl and Jennifer Garner were wrong, and the Paris Review and Conan O’Brien were right.

Updates: Language Log has a short post on what it calls Snuck-gate. It’s worth a detour, as always, for the discussion — and for Mark Liberman’s phrase “snuckological scholarship”. In the comments, David Denison has brought my attention to Richard M. Hogg’s study of how snuck might have arisen: Snuck: The Development of Irregular Preterite Forms. Most of Hogg’s paper is available here.

The Awl has posted another entry on the matter, with an argument as weak as snuck is strong: “NEVER, never, shall snuck be a word”. Too late.

Although John E. McIntyre neither likes nor uses snuck, he acknowledges that it“is not going away, and decisions about its use are purely judgments of taste and style rather than determinations of what is right or wrong grammatically”.

Mark Liberman runs a corpus analysis and shows graphically how “the frequency of both forms has increased over time” but “there’s also a clear snuckward trend”. In a follow-up post about the unexpected attractiveness of snuck, he concludes that “basically, sneaked is toast”.

There’s a short and lively discussion about snuck and its ilk at Language Hat.

I neglected to say that I found no mention of sneak or snuck in Fowler’s original dictionary or in Ernest Gowers’s slightly revised edition. But there’s an entry at Random House from 1998, which confirms most of the observations above and adds to the consensus that snuck is fine in most contexts:

In present-day English, snuck is extremely widespread throughout the country, even among educated speakers, and in the speech of younger people it is the dominant form. . . . Many people object to snuck, but that has been changing and is likely to change further as younger snuck-ful speakers age and enter the mainstream. . . . In British English sneaked remains the usual past form, with snuck appearing only in humorous or nonstandard use.

In Words and Rules (1999), his book about irregular verbs, Steven Pinker writes the following:

Snuck has the distinction of being the most recent irregular to enter the standard language, with a first citation in the Oxford English Dictionary from 1887. According to a recent survey, most younger Americans have no problem with snuck, though most older Americans frown on it. . . . According to one theory, snuck sneaked into English via sound symbolism. Its connotations of quickness, furtiveness, and mild disreputability brought to mind the sound pattern of slunk and suck, especially since all three end in a suitably crisp k. A less far-fetched explanation is that sneak is close in pronunciation to sting, strike, dig, and especially stick—an ĭ is just a lax, short ē, and n is basically t or d pronounced through the nose, as any cold-sufferer can tell you. The failure to rhyme with creak and tweak was no impediment, because similarity in the gestures of articulation matter more than similarity in sound, and that makes it tempting to analogize stick–stuck to sneak–snuck.

Emily Brewster of Merriam-Webster sent these two Ngrams my way, via Twitter, which show emphatically how snuck has sneaked up on us. 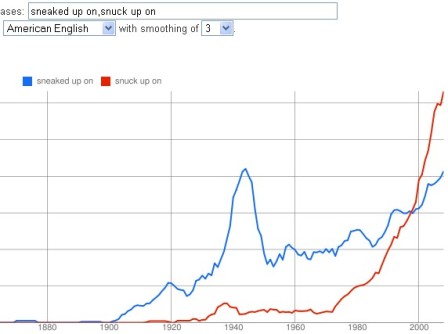 This entry was posted on Friday, June 18th, 2010 at 6:10 pm and is filed under etymology, language, language history, linguistics, usage, words. You can follow any responses to this entry through the RSS 2.0 feed. You can leave a response, or trackback from your own site.

78 Responses to “Snuck” sneaked in