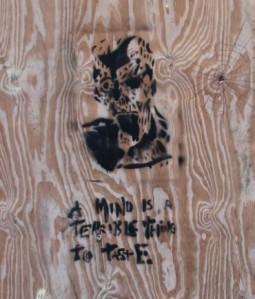 A mind is a terrible thing to taste.

The phrase “A mind is a terrible thing to waste” was coined in 1972 by Forest Long, an adman, as part of a UNCF campaign. It has since become “part of the American vernacular”.

Though the slogan is widely known, many people are unaware of its origin. (I was, until I began writing this post.) More recently, the UNCF made the phrase more prominent in its logo.

None of which has anything to do with zombies, but I was interested to discover that the phrase is so new: it has the feel of folk wisdom about it.

And I liked the graffito; zombie puns aren’t very common on the streets of Galway.

This entry was posted on Thursday, February 3rd, 2011 at 1:11 pm and is filed under advertising, humour, photography, phrases. You can follow any responses to this entry through the RSS 2.0 feed. You can leave a response, or trackback from your own site.