I thought these things were different than they used to be. – James Thurber

If you see nothing immediately wrong with the phrases different from, different to, and different than, you might be surprised by all the ink spilt, keys poked and eyebrows furrowed over their respective permissibilities. Not only is different than often mistakenly called a mistake, it has been described as flagrant, eyebrow-raising, revolting, abominable, and ridiculous. More on that later. First, an introduction to the use and distribution of the expressions.

Different from is by far the most widely used and accepted form, different to is common in British English, and different than is spoken regularly in different varieties of English, including US English and BrE. All have their uses. The predominance of different from, particularly in written English, is shown by these figures from the Collins Cobuild Bank of English, which I found at alt.usage.english:

and in the following ngrams of instances in BrE and AmE texts:

Searches in American and British corpora show some of the many ways these expressions are used. The voluminous Merriam-Webster Dictionary of English Usage (MWDEU) offers a historical survey of both usage and commentary, and concludes that all three “have been in standard usage since the 16th and 17th centuries and all three continue to be in standard use”. The Columbia Guide to Standard American English (CGSAE) concurs: all “are Standard and have long been so”.

The critics, however, have not been dissuaded. The Shorter OED tells us:

Different to and different than are often regarded as incorrect, though used by many well-known writers since [the 17th century]; different than is now almost exclusively used in North American English, where different to is rare.

Since the 18th century, language critics have singled out different than as incorrect, though it is well attested in the works of reputable writers. . . . Different than is more acceptably used, particularly in American usage, where the object of comparison is expressed by a full clause: The campus is different than it was 20 years ago. Different from may be used with a clause if the clause starts with a conjunction and so functions as a noun: The campus is different from how it was 20 years ago.

Merriam-Webster’s Pocket Guide to English Usage supports the point about how each form has its particular virtues:

And yet. Browsing the internet for opinion on the matter, we meet a mass of peremptory protest, which I must now counter-protest. Different than is not grammatically incorrect, nor can it be dismissed as a common grammar error or an eyebrow-raising gaffe, let alone one of the 10 dumbest grammar mistakes. It is neither a nasty and glaring error nor a flagrant grammar mistake that makes you look stupid or dumb. You may call different than abominable, but this is a matter of taste. You may call it ignorant, but you would be wrong, and unaware of the unfortunate irony.

These judgements, whether rude or neutral, newly acquired or long indulged, are pet peeves. They have nothing to do with grammatical correctness. Any suggestion that different than/to is grammatically incorrect, end of story, would have dissolved in a few minutes’ research or by consulting a single reliable authority.

Prescriptive commentators agree. Garner’s Dictionary of Modern American Usage finds it “indisputable that different than is sometimes idiomatic, and even useful”. Fowler saw nothing wrong with different to: “That d. can only be followed by from & not by to is a superstition.” Ernest Gowers, in The Complete Plain Words, says there is “good authority for different to . . . Different than is not unknown even in The Times”. Good heavens! And here is Eric Partridge, a fussier observer than most:

different to . . . is permissible (see, for evidence, The O.E.D.) . . . Different . . . than seems to occur more and more frequently in the New York daily and weekly press. Evidently the comparative sense of the word rather than the fact of its positive form may govern the syntax. Whether this is regrettable is a question of taste. (Usage and Abusage)

The commonly expressed view that different should only be followed by from and never by to or than is not supportable in the face of past and present evidence or of logic, though the distribution of the constructions is not straightforward. (The New Fowler’s Modern English Usage; emphasis mine)

Maybe this lack of straightforwardness leads to a strong preference that hardens into a rule (the “one right way” fallacy). Maybe unfamiliarity fuels the presumption of wrongness. Whatever the causes, a weird cult of correctness has built up around different from that excludes alternatives. It is, as Lynne Murphy puts it, “the only variant that is universally considered to be ‘correct’ by the people who make declarations about such things”. Presumably for this reason, CGSAE recommends sticking with different from “for Formal and Oratorical levels”.

There is no sensible, evidential foundation for the belief that only from is correct and that than and to are incorrect. In Style: Toward Clarity and Grace, Joseph M. Williams shows how capricious and irrational this is. He describes it as one of a set of rules that “Pop Grammarians endlessly rehearse as evidence that English is close to being a terminal case.” (For more on the perennial doom-mongering over language, see this post.) These rules, writes Williams,

have become the symbolic flags around which those most intensely concerned with linguistic purity (whatever that may be) have tacitly agreed to rally. None of these “errors” interferes with clarity and concision; indeed, some of them let us save a word or two.

In many cases, as we have seen, the objection to different than is simply that: an objection, along the lines of a Monty Python contradiction or a Judge Dredd yell. Maybe the critic read a daft list of alleged grammar mistakes and added different than/to to their own nest of peeves. It’s understandable that some people prefer not to risk a mistake that would make them look “dumb” in the eyes of another, whoever it might be and however dubious their authority.

At a conservative estimate, it can be said that some 90% of the English mother-tongue people who use this word [different] use it wrongly. Even if that were to rise to 100%, their use would still be wrong because there are some very basic and logical reasons why that is so.

Most British people say “different to” and most Americans say “different than” and they are all wrong because the ONLY correct form is “different FROM”. We shall now explain why “from” is the only correct preposition to be used with “different” and why “to” is wrong and “than” is ridiculous.

Here, I removed the emphasis because the capitals are shouty enough. Note the tight and defensive circular reasoning, the determination to find fault, and the gargantuan stubbornness. If you can bear the QES’s debasement of reason, plough on, then visit Motivated Grammar for Gabe Doyle’s sound quashing of the spurious objections to following different with than or to.

If you need further reassurance, it helps to see who else has used so reviled a phrase. Different to appears in E. M. Forster’s A Room With A View. MWDEU quotes Thurber, as above, using different than, alongside Thackeray and Joseph Heller among others. Michael Quinion informs us that the OED finds different than in Defoe, Coleridge, De Quincey, Goldsmith, Carlyle et al. Yes: than is more colloquial. But there’s nothing inherently wrong with it.

Newspaper style guides tend to be more restrictive, understandably sacrificing complexity for the sake of a snappy rule. The UK Times specifies “different from, and never different to or than”. The Economist says the same. The Guardian Book of English Language (2007) allows different from and to, but not than; the corresponding online guide elaborates that “different to is widely accepted nowadays […]; different than is wrong, at least in British English”. Should someone tell Thackeray and Defoe? And Guardian writers?

The AP Stylebook says different takes “from, not than”. National Geographic prefers different from “in virtually every construction” except when from “would require an elaborate construction”. Simon Heffer, who writes the Telegraph style guide (“different from”) declares that “Something is different from something else, not different to it and certainly not, as in one especially revolting usage, different than anything.” When one reacts so viscerally to variant prepositions, the risk of disgust is high indeed.

The more balanced Chicago Manual of Style (16th ed., 5.220) says different from is “generally preferable” to different than, but adds that the adverbial phrase differently than is sometimes “all but required {she described the scene differently than he did}”. The issue popped up in their Q&A as well, where they defend different than as “not incorrect, and in fact […] sometimes the more elegant choice when followed by a clause”. 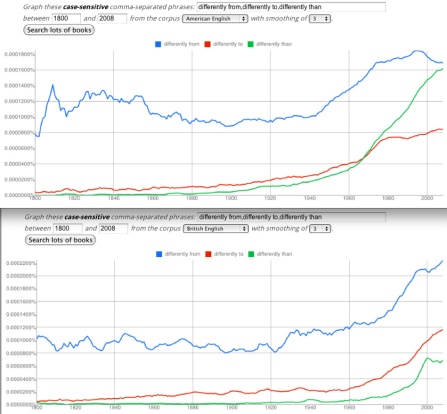 In a situation like this, where a question of usage appears contentious, you have options. You can take the word of self-appointed “experts” who seem to think grammar is the sum of spelling, style, statutes and censure, who find fault with vast chunks of the world’s English-speaking population, who rarely if ever offer reputable references to support their dogma, and who rest their case on personal preference and a stern or mocking tone (and sometimes, as a treat, an eccentric application of logic).

Or you can look up the contentious question in a good usage dictionary – or in several, the better to compare them and reach an informed conclusion. Calling different than or different to “wrong” is misguided. It’s an old grammar myth that has trickled down to the present day. Why perpetuate a stigmatizing non-rule? Let people speak whatever way comes naturally to them, so long as they make themselves clear, and consistent with context.  Dialectal differences should be savoured, not savaged.

Mark Liberman at Language Log received a query about the phrase differ to, and presents some data and analysis of prepositions used with the verb differ, quoting from this post by way of introduction.

A few literary examples to add to Thurber’s at the top of the post:

I am going to try to say something quite different than what they said. (Richard Feynman, ‘The Future of Physics’, from Don’t You Have Time to Think?)

It was a lot different than picking up a Cadillac and selling it down in Ohio for parts, but there was a lot of money in it too. (Elmore Leonard, Stick)

It was a different bartender than the one of the previous afternoon. (Dana Stabenow, Play With Fire)

Aside from the threats of violence and kidnapping, it’s not much different than hanging your stockings from the mantel. (David Sedaris, Holidays on Ice)

This entry was posted on Wednesday, April 20th, 2011 at 3:36 pm and is filed under editing, grammar, journalism, language, speech, usage, words, writing. You can follow any responses to this entry through the RSS 2.0 feed. You can leave a response, or trackback from your own site.