Book review: Through the Language Glass

Whether and how our languages shape our thoughts, perceptions and worldviews is a perennially vexed subject. (For starters, what do we mean by shape and thoughts?) Known as linguistic relativity or the Whorfian or Sapir-Whorf hypothesis, the nature and extent of this influence have proved difficult to establish. Traditionally, some philosophers made grandiose claims about it, but the currency of such claims plummeted in the 20th century.

Linguist Guy Deutscher, in a NYT Magazine article titled ‘Does Your Language Shape How You Think?’ says that with ‘Science and Linguistics‘ (PDF), Benjamin Whorf ‘seduced a whole generation into believing that our mother tongue restricts what we are able to think’. I don’t think Whorf deserves so much responsibility, or blame, for whole-generational seduction,* but here’s a pertinent excerpt from his influential essay:

Formulation of ideas is not an independent process, strictly rational in the old sense, but is part of a particular grammar, and differs, from slightly to greatly, between different grammars. We dissect nature along lines laid down by our native languages. The categories and types that we isolate from the world of phenomena we do not find there because they stare every observer in the face; on the contrary, the world is presented in a kaleidoscopic flux of impressions which has to be organized by our minds — and this means largely by the linguistic systems in our minds. 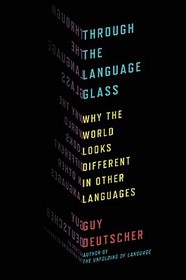 Despite linguistic relativity’s fall from academic favour, it persists – thrives, even – in the popular imagination. In his new book Through the Language Glass: Why the World Looks Different in Other Languages, Deutscher looks at how valid it really is and what conclusions may be drawn about it. Sifting through a weight of data and theories, he describes several ways in which a weak form of linguistic relativity seems to obtain – colour perception, gender, and spatial orientation – and makes the case that language can influence our thoughts and thought patterns not radically, but more significantly than is sometimes acknowledged.

After a prologue summarising the issues, the book begins with colour. Deutscher delivers a long and fascinating account of how William Gladstone’s Homeric scholarship brought attention to the peculiar treatment of colour in the Iliad and Odyssey: colour descriptions were strangely lacking, and where they occurred they seemed wayward (‘the wine-dark sea’). Gladstone’s explanation was equally strange: ‘nothing less than universal color blindness among the ancient Greeks’. Quoting Gladstone:

Colours were for Homer not facts but images: his words describing them are figurative words, borrowed from natural objects. There was no fixed terminology of colour; and it lay with the genius of each true poet to choose a vocabulary for himself.

Gladstone suggested that maybe colours, as abstract phenomena distinct from objects, began striking people only after the development of artificial colours such as in paints and dyes. The sky and sea are blue to us, but is this because we’re so familiar with the colour in more tangible forms?

Deutscher tells the story of Lazarus Geiger, a philologist who picked up where Gladstone left off by investigating the description of colour in old texts in other languages. He found similar deficiencies throughout this etymological terrain, and also that colour terms when they emerge do so ‘according to a definite succession’ and ‘in the same order everywhere’. Geiger died young, in 1870, his prescient ideas overlooked.

At the end of part 1, Deutscher skewers what he calls ‘the dogma of equal complexity’: the idea that all languages are equally complex. His corrective, or reminder, is worth repeating: ‘there is no a priori reason why different languages should all mysteriously converge on even roughly the same degree of complexity’.

Then we’re back to Edward Sapir and the ‘linguistically determined thought world’ described by his student, Whorf. Deutscher conveys the ‘heady atmosphere of discovery’ that allowed a ‘daring idea about the power of language’ to shoot to prominence. He tells how the idea later crashed precipitously ‘when it transpired that Sapir and especially his student Whorf had attributed far-fetched cognitive consequences to what were in fact mere differences in grammatical organization’:**

The excitement about the – largely factual – strangeness of expression in American Indian languages was somehow taken as sufficient to deduce the – largely fictional – differences in their speakers’ perceptions and thoughts.

Pop-Whorfianism often takes the form ‘no word for X‘; a language’s lack of a given term is supposed to imply its speakers’ lack of the concept. Deutscher rails against the ‘toxic fallacy’ that our language limits what we are able to understand. Languages are not fully directly translatable, but they are generally sufficiently so.

Deutscher quotes the anthropologist Franz Boas, who in 1938 wrote that grammar ‘determines those aspects of each experience that must be expressed’, and that these aspects vary between languages. Years later, Roman Jakobson repeated the essential point: languages ‘differ essentially in what they must convey and not in what they may convey’. More recently, Barbara Schmiedtová said it’s ‘not about whether you can say anything in any language. The interesting thing is what you prefer to say […] when you are under pressure, which is the normal situation when you produce language.’

For spatial orientation, Deutscher describes the Australian aboriginal language Guugu Yimithirr, which instead of right, left, behind and in front of uses cardinal points: the dog was east of the tree. Native speakers automatically perceive object relations this way, even in dreams and memories, and with no painstaking cognitive navigation. It is a kind of automatic mental compass.

This mode of perception and description is far from unique. Other ‘geographic coordinate systems’ around the world take their cues from local landmarks like seas, rivers, or mountains, as distinct from the ‘body-framed mapping’ we likely employ. Several are summarised in this presentation (PDF). Deutscher recounts how Stephen Levinson, who studied Guugu Yimithirr, asked its speakers for advice on how he might improve his sense of direction, and they suggested:

the differences in brightness of the sides of trunks of particular trees, the orientation of termite mounds, wind directions in particular seasons, the flights or bats and migrating birds, and alignment of sand dunes in the coastal area.

Introducing the subject of grammatical gender, Deutscher reprints Heinrich Heine’s poem Ein Fichtenbaum Steht Einsam along with two translations, one of which (Emma Lazarus’s) takes into account the fact that the German original marks one tree as male and one as female. This grammatical feature of German seems central to Heine’s metaphor, yet many translations sidestep it, referring to both trees as it.

There has been some research into how gender systems might affect our ideas about things. Is it significant (beyond grammatical curiosity) that forks in Spanish are masculine and spoons are feminine, and that this leads some people to associate certain stereotypical properties with them? Deutscher contends there is ‘little doubt that the idiosyncrasies of a gender system exert a significant influence on speakers’ thoughts’.

It depends on what you consider significant, I suppose. In some respects his claim is fair: sexist pronoun use (and related terminology) reflects and contributes to sexist culture. So I was surprised to see man used generically in TTLG (‘man landed on the moon’). And this passage gave me pause, but not in the way the author presumably intended:

But if you native speakers of English are tempted to feel sorry for those of us who are shackled by the heavy load of an irrational gender system, then think again. I would never want to change places with you. My mind may be weighed down by an arbitrary and illogical set of associations, but my world has so much to it that you entirely miss out on, because the landscape of my language is so much more fertile than your arid desert of “it’s.”

It seems an oddly triumphalist way to make a point. Sometimes, too, the book sets up its arguments heavy-handedly, underwhelming the reader. For the most part, though, Deutscher writes skilfully, making light work of knotty and subtle concepts. Human brains are ‘innately equipped with powerful pattern-recognition algorithms, which sort similar objects into groups’; TTLG shows how we do them a disservice by ignoring the facts, wherever they lead us.

Like Deutscher’s The Unfolding of Language, which examined how languages function and change, Through the Language Glass is an engrossing and entertaining book. It offers an illuminating and accessible account of linguistic relativity, and a colourful tour of many surprising linguistic features. Drawing judiciously on overlooked history and modern research, it updates us on complex and oft-misunderstood issues that affect us all – however subtly – every day.

Disclosure: Henry Holt And Company were kind enough to send me a review copy of this book. It’s available at Amazon, Book Depository, and your usual haunts.

Disclaimer: I’m not a linguist. Corrections and clarifications are welcome.

* ‘Though Whorf’s view of relativism is only one out of a great many, and though it has no privileged status from a scientific point of view, it does have a privileged historical status.’ – George Lakoff, Women, Fire, and Dangerous Things

** Arika Okrent in her book In the Land of Invented Languages describes the idea’s fluctuating acceptability thus: ‘the Whorfian hypothesis endured a long half century of being proven, disproven, defended, demolished, revived, mocked, and revived again.’

This entry was posted on Tuesday, June 21st, 2011 at 5:26 pm and is filed under book reviews, books, grammar, language, linguistics, science. You can follow any responses to this entry through the RSS 2.0 feed. You can leave a response, or trackback from your own site.

10 Responses to Book review: Through the Language Glass