Here is a very interesting page on comic book grammar and tradition. Written by Nate Piekos, a comic artist, letterer and font designer, it presents a series of ad hoc comic panels with text explaining how to convey particular styles, moods, sounds, and punctuation through speech balloons and related graphic devices. Piekos writes:

Comic book lettering has some grammatical and aesthetic traditions that are unique. . . . The majority of these ideas have been established by [publishers] Marvel and DC, but opinions vary from editor to editor

Piekos explains such details as when to use lowercase, how to convey “off-camera” speech, and in what order to place the marks in an interrobang (!? or ?! – “It’s a loose rule that the question mark should come first”). 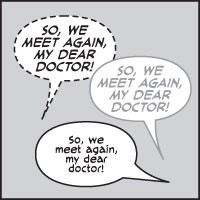 Sometimes these conventions shift. Of whispering (see image, reproduced with permission), he says:

Traditionally, whispered dialogue is indicated by a balloon with a dashed stroke. More recently accepted options are a balloon and dialogue in a muted tone (grayed-out), or with a lowercase font in conjunction with small dialogue/big balloon.

While reading comics, I have noticed some typographic patterns but never established whether they were standardised forms, for example the fact that emphasis is normally illustrated by a combination of bold and italics (and sometimes underlines), seldom if ever by either in isolation. I’m glad to have some of these observations and wonderings confirmed, and to have a host of others clearly summarised.

You can see them all here.

This entry was posted on Wednesday, July 13th, 2011 at 1:39 pm and is filed under art, grammar, language, punctuation, speech, writing. You can follow any responses to this entry through the RSS 2.0 feed. You can leave a response, or trackback from your own site.