Academy of English? Ain’t no sense in it.

Wikipedia has a few basic facts about the QES and its Academy. You probably know that Wikipedia is a portmanteau word blending wiki with encyclopedia. If you didn’t, I don’t recommend asking the Academy representatives, because they do not know what portmanteau words are:

And this, we are told, ‘is where the Academy is in its element’. Even if it hadn’t confused portmanteau words with auto-antonyms, its point would be just as senseless: neither construction is a ‘[reason] why English is being debased’. Though you could make the case that English is debased by hopelessly muddled definitions.

Behind the QES’s dubious claims to authority and to good judgement in English usage lies hopeless ignorance of how language works and an ignoble attitude to non-standard expression. My earlier post has many examples; this one has more.

Grammars of languages are used automatically, effortlessly, unconsciously, and almost continuously – as long as one is speaking, listening, or even dreaming in the language.

Languages have many rules, most of which are understood implicitly by native speakers. Even if you’ve never studied the rules of syntax and morphology, you use them instinctively every day. The sham rules that get all the attention, like ‘Don’t split infinitives’, are not grammar rules but fossilized stylistic preferences. The popular image of grammar suffers because of bad-tempered insistence on these points, which were in many cases created by pedants decades or centuries ago and elevated through repetition to the status of pseudo-authority.

Though good writing does not depend upon them, these points of style and usage are the sort that find fervent favour with the QES, its Academy, and pet peevers everywhere. For example, after surveying the range of opinion on what prepositions can follow different, I found that from, than, and to are all valid – to varying degrees in different contexts – yet the QES claims that only from is acceptable, and it believes this non-rule is absolute and eternal.

If you study language or pay impartial attention to how it works, a belief so trivial and unreasonably rigid might strike you as misguided, arrogant, and even crazy. You would be in good company. Geoffrey Pullum, Head of Linguistics and English Language at the University of Edinburgh, wrote that prescriptivists of this sort

do not acknowledge any circumstances under which they might conceivably find that they are wrong about the language. If they believe infinitives shouldn’t be split, it won’t matter if you can show that every user of English on the planet has used split infinitives, they’ll still say that nonetheless it’s just wrong. That’s the opposite insanity to ‘anything that occurs is correct’: it says ‘nothing that occurs is relevant’. Both positions are completely nuts.

The other insane position Pullum mentions is also relevant here. ‘Anything that occurs is correct’ is an inane caricature of descriptivism. It’s a straw man that extreme prescriptivists use to paint descriptivists as people who care so little about effective communication that they accept as valid everything that is said or written:

The Descriptivists . . . consider to be correct anything that is said or written [Academy website]

We believe that descriptive linguistics, which declares anything anybody said or wrote to be ‘correct’ caters to mass ignorance under the supposed aegis of democracy and political correctness. [QES website]

This is fatuous codswallop. Descriptivists know there are exponentially more ungrammatical strings of words than grammatical ones. Try it. Assemble some words at random, or babble in deliberate defiance of speech norms. No one in their right mind would call the results grammatical (unless by outrageous chance you uttered something correct).

The sticklers’ claim is not a disingenuous parody. It’s a sincere belief, perhaps tied to cultural unease, and it fuels their sense of besieged martyrdom: the conviction that they alone truly care about English. They can lament that the language (and the world as we know it) is going to the dogs, and that we need these rules – the ones they like – to save it.

‘At the moment, anything goes,’ says Martin Estinel, founder of the Academy. ‘The only people who use the phrase “anything goes”,’ says David Crystal, ‘are prescriptivists desperately trying to justify their prejudices.’ It’s possible that, as the esteemed John E. McIntyre wrote, they are after all ‘impervious to reason’. You get to choose whose opinions to credit.

I could go on in this vein and bore you to apathy, but luckily others have taken up the case, and have done so more entertainingly and eloquently. If you’ve been following the QES’s shenanigans, or if you have any interest in the bizarre power struggles over English usage, you’ll find much to savour on the websites of the Anti-Queen’s English Society and the Proper English Foundation. I offer both groups a warm welcome.

The Anti-Queen’s English Society (Anti-QES) seeks to ‘resist essentialist and imperialist views of language, as promoted by the Queen’s English Society’. It contends that the QES ‘are archaic perpetuators of linguistic prejudice’, and it finds the QES’s definition of English ‘fundamentally political, classist and entirely unempirical’. It supports these contentions at articulate length.

In a thoughtful analysis of a book by QES president Bernard Lamb, Robert Baird of the Anti-QES lays bare some of the QES’s ‘laughable misconception[s]’, and finds that the QES fabricates facts to meet a ‘culturally entrenched agenda’. Lamb, by the way, approves of yummy mummy but presumably still disapproves of Ms.; the Academy calls it a ‘linguistic misfit’ on a particularly silly page of sexist nonsense.

Even as he praises Baird’s analysis, Martin Estinel takes a potshot at ‘the illiterate masses’ and their ‘inarticulate noises’. Classy. Sneering disdain seems to be a specialty; see ‘common curs’, below, and witness this, from the Academy’s Robin White:

what proceeds from the mouths of many British ‘speakers’ of English could reasonably be described as a series of squeaks and grunts, nasal whinings and clucking.

‘Reasonably’? Not remotely so. Does slinging insults have educational value, or is it just the technique they’re most comfortable with?

The Anti-QES, by contrast, is a model of level-headed tolerance. Its website is informed and accessible, with room for comments and a growing list of resources. Its scholarly prose is leavened by wit and geniality, making it a consistent pleasure to read. The Anti-QES acknowledges the problems with its name, and is open to ideas. They’re on Facebook, too.

The Proper English Foundation (PEF) has its own Académie von anglais as a mischievous counterpoint to the Academy of Contemporary English (that name, alas, does not sound a note of ironic humour*). These self-described ‘Kings of English’ also launched a petition, Protect me from yon ‘Queen’s English Society’, demanding that the QES be kept ‘at least 50 yards away from the English language at all times’. It urges media outlets discussing language ‘to interview experts who use evidence’. There’s an idea!

Much of the PEF website takes the form of sharp, cheerfully unhinged parody. Alongside its admirable Académie, it hosts a dungeon of enemies that includes Geoffrey Chaucer (the detestable cur), Shakespeare (the embarrassing twit), a man on a train, and the QES itself. I have the honour of a couple of amusing cameos on this page.

The PEF offers a rambling abundance of pages. You will find, among other delights, a world map of southern England; a collection of silly foreignisms (recommended for NEMPs, whose English, says the QES, is ‘almost invariably wrong’ and leads to ‘sinister and perverse‘ situations); an essay on how languages evolve (which makes the prudent point that ‘In many ways, corruptions are the history of language’); and a list of common errors – that is, ‘errors that mark you out as common’. 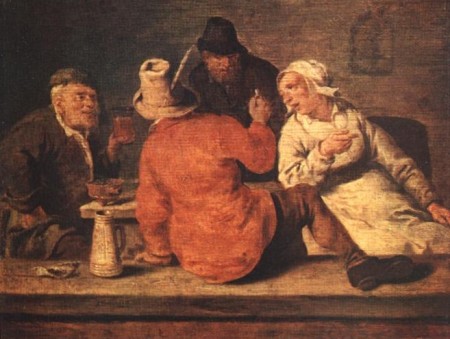 Jan Miense Molenaer: Peasants in the Tavern (detail). It’s fair to assume that these shameless devils are mauling and massacring their language.

The last link may be of particular interest to the ‘common curs‘ who by daring to speak in their natural dialects ‘maul and massacre the language’. Here, the Academy publicly reveals its perception of the public perception of the Academy. It shows how deeply and determinedly the Academy has misunderstood the criticism levelled at it, and showcases an unedifying strain of petulant self-righteousness.

Had I encountered the QES when I was young and knew even less than I know now, I might in my naïveté have paid them some heed. When you’re unsure of something, it’s natural to defer to authority, however unsound it turns out to be. The QES seeks to influence how English is used and taught, but it clings to eccentric and erroneous ideas. There is a clue in the note, no longer online, that its Academy was founded by two members of the Society which ‘until then had had little contact with the outside world’.

The English language, far from being mortally threatened by the non-standard onslaughts of foreigners, young people, and commoners, is really doing all right. It does not need an academy to protect it, still less to champion its most privileged dialect. Samuel Johnson and Joseph Priestley recognised this centuries ago. Education and literacy are vital, but they cannot be achieved or effectively promoted through a morass of ignorance, insults, and fear-mongering.

Language is endlessly playful and fascinating, but this is too often obscured by stern and gloomy authoritarians who never tire of haranguing people over shibboleths and exploiting their anxieties over minor and imaginary faux pas. You don’t have to listen to them. You don’t even have to visit their websites, unless you’re a glutton for punishment like me.

But I do recommend that you visit the Anti-Queen’s English Society and the Proper English Foundation for a generous, rational, and enjoyable appreciation of language, and more laughs than you might be expecting.

For a convenient collection of commentaries on the Queen’s English Society, see the end of my earlier post. For more on the stubborn popularity of groundless peeving, see this repository of links at Language Log, or my own posts on peeves and peevology. I’ve also been tweeting about this; if you’re the tweeting type, you can find me at @StanCarey.

Updates: At his excellent Baltimore Sun blog You Don’t Say, John E. McIntyre has posted a follow-up to the above, in which he writes that the QES and its Academy ‘retain a capacity to do harm, to the extent that readers, particularly if any of them are teachers, heed their humbug’.

Josh Rahn at The Writing Source objects to ‘the overtly classist tone evident in much of the society’s literature’.

In a rousing call for grammatical revolution, Joe McVeigh responds in satirical kind by announcing ‘the dawning of the Age of Avant Garde Grammar’ and retrospectively creating (I think) the President’s Finnish Society to help ‘rid Standard Finnish of vulgar slang and foreign words’.

* The Academy describes gay as a fad word, and hopes it will ‘[slip] into oblivion’. How’s that for contemporary?

This entry was posted on Thursday, July 21st, 2011 at 6:32 pm and is filed under grammar, language, usage, writing. You can follow any responses to this entry through the RSS 2.0 feed. You can leave a response, or trackback from your own site.

15 Responses to Academy of English? Ain’t no sense in it.