For a few years in the 1950s, independent publishing company André Deutsch rented the top two-thirds of a doctor’s house in London. Diana Athill, then an editor at the company, describes them as “happy years, but still a touch amateurish: did proper publishers have to put a board over a bath to make a packing-bench?” (Stet: An Editor’s Life*).

During its time in that location, however, the company did well enough to buy Derek Verschoyle’s firm and to move into its premises in Soho. Athill recalls one consequence of the deal:

One of the more burdensome books we inherited from him was a pointless compilation called Memorable Balls, a title so much tittered over that we thought of leaving it out when we were arranging our stand at The Sunday Times’s first book fair. Finally one copy was shoved into an inconspicuous corner – where the Queen Mother, who had opened the fair, instantly noticed it. Picking it up, she exclaimed with delight: ‘Oh, what a tempting title!’ André insisted that it was his confusion over this that made him drop her a deep curtsey instead of a bow.

As you’ve no doubt guessed, Memorable Balls has nothing to do with sport or anatomy but concerns formal dances. It was edited by James Laver, an author and fashion historian who came up with a system he called Laver’s Law (Taste and Fashion, 1937) to describe popular attitudes to fashion: 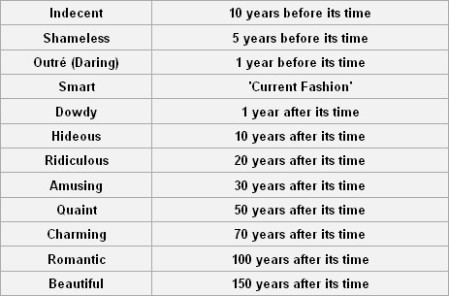 Was the author’s tongue partly in cheek when he composed this table? I don’t have a copy of Taste and Fashion, or any of Laver’s other books, so I can’t infer his tone from context.

It is in any case a revealing list of adjectives, some of which I often see applied to language usages. “Language is like dress,” wrote Simeon Potter in Our Language. “We vary our dress to suit the occasion.”

* For another anecdote from Athill’s marvellous memoir, see this earlier post.

This entry was posted on Monday, August 15th, 2011 at 3:56 pm and is filed under books, humour, language, stories. You can follow any responses to this entry through the RSS 2.0 feed. You can leave a response, or trackback from your own site.