Bone-houses in the Story of English

In the preface to his new book, The Story of English in 100 Words, David Crystal writes that the usual approach to telling the story of English is to offer a broad view that identifies general themes and trends (as in the same author’s Evolving English), while another method is to pick particular words and phrases and detail their idiosyncratic origins and characteristics.

The first approach, Crystal says, gives readers “a clear view of the wood” but “very few of the trees”; the second does the opposite. His aim in The Story of English in 100 Words is to unite these perspectives, so he chooses 100 words and uses them as a base from which to explore how the language emerged and developed over the last millennium and a half.

The list may appear random at first glance, but each word represents something of broader significance — a whole class of words or mode of change, for example, or a certain social or cultural idea — which allows Crystal to move from the specific to the general and thereby describe the history and character of the language in neatly self-contained 2- and 3-page nuggets.

It’s quite a short book, but I’ve had others on the go so I’ve only dipped into it so far. What I have read has been very entertaining and informative. While the book is aimed at general readers, it is likely to contain surprises even for those very familiar with the terrain: Crystal says he himself learnt something new while researching every chapter.

I learnt several new things while reading the chapter on bone-house, a “word painting” from the 10th century. Crystal says it was used by the Anglo-Saxons, who spelt it ban-hus (pronounced “bahn-hoos”). It referred not to an ossuary or building for the dead, but to a living human body. (The Danse Macabre of the Middle Ages shows a similar frankness about our common anatomy and mortality.) 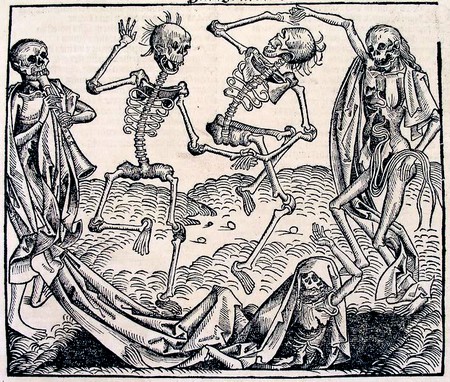 Dance of Death by Michael Wolgemut, 1493

The picture created by bone-house or ban-hus, Crystal writes, was evidently an appealing one,

Such vivid figures of speech appear throughout the poetry of the age — Beowulf is full of them — not just in English but in the early verse of other Germanic languages. Crystal continues:

These coinages are called kennings, a word adapted from the Old Icelandic language. Kenning is from the verb kenna, ‘to know’, and it captures the idea that these coinages have a meaning that is more insightful than can be expressed by a single word. Ken is still used as a verb in Scots English and in some northern dialects of England. And we still hear it as a noun in the phrase beyond our ken. . . .

Kennings don’t seem to have been much used outside of poetry, and they fell out of use after the Anglo-Saxon period. But the same poetic impulse lies behind many compound words. We hear it still when a scientist is described as an egghead, or a criminal as a lawbreaker or a boxer as a prize-fighter. But we don’t seem to take the same joy in creating vivid alternative descriptions as the Anglo-Saxons did.

All 100 words are listed in the Telegraph at the end of a fascinating introduction to the book by Crystal himself, in which he writes that “words are more than just linguistic objects. They are windows into the world of those who use them.” In which case you can think of this book as a time machine with 100 portals.

Disclosure: I received an advance copy of The Story of English in 100 Words from Profile Books — not to review, but because I helped them source a particular image of Belinda Blurb. (You’ll find me listed in the illustration credits at the back.)

I almost forgot: On Google+ I posted a very brief excerpt of Crystal’s amusing first encounter with singular y’all, for all you all y’all who might be interested.

Edit: John E. McIntyre writes: “I knew I’d heard people use y’all as a singular, had even been addressed as such myself. But no, everyone said, y’all is always a plural, and it’s only damnyankees who get it wrong.” Lots more on this at Language Log.

This entry was posted on Thursday, November 17th, 2011 at 10:23 pm and is filed under books, language, language history, metaphor, words. You can follow any responses to this entry through the RSS 2.0 feed. You can leave a response, or trackback from your own site.

15 Responses to Bone-houses in the Story of English