Is you is or is you ain’t bad grammar?

In a post at Lingua Franca a few months ago, Geoffrey Pullum made a useful distinction between Normal and Formal styles of English. He says “proper use of English is not defined by relentless use of Formal”, a fact that eludes those for whom correct English is coterminous with formal standard English.

Unaware that correctness, far from being absolute, can vary with register, dialect and context, people end up taking against innocuous usages and non-existent errors that then impair their enjoyment of language. Their appreciation of music suffers too, because they hold song lyrics to the same restrictive standards as elevated writing.

People flip out over double negatives, omitted subjunctives, reflexive pronouns and the playful disregard of formal subject-verb agreement as though these implied illiteracy, laziness, stupidity or recklessness. Never mind dialectal sensitivity: not even poetic licence gets a look-in here.

The common but notoriously non-standard word ain’t occurs frequently in song lyrics and is often singled out for criticism, be it light-heartedly ironic or stern and cranky:

I dislike hearing the word ain’t in a song and sometimes an otherwise beautiful piece of music just grates when that word is used. Having been a teacher I guess to me it’s the grand daddy of bad grammer [sic].

But ain’t isn’t really a grammatical issue. Bad grammar and non-standard language, though commonly conflated, are not the same thing. Bad grammar means something like “Goed us town.” I don’t think that’s grammatical in any variety of English, though we might hear goed from a child who has temporarily regularised a strong verb. 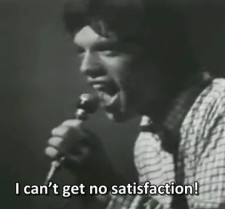 There are rules of syntax and morphology that we pick up as infants and observe automatically, and there are “rules” – generally style or usage guidelines – that we’re taught later and that may be worth heeding in certain settings. But to many people, bad grammar and grammar errors simply mean any set of conventions in English that differ from the formal standard (or from their interpretation of it).

In short: informal ≠ incorrect, and non-standard ≠ sub-standard. A particular kind of English – formal written style – is socially privileged, and sometimes it’s exalted at the expense of common sense or courtesy. Ignorance of these nuances means irrational peeves thrive, and people make a habit of collecting and hating everyday usages that don’t fit their narrow sense of what’s acceptable.

English is replete with styles, dialects and sublanguages that are fully context-appropriate, and grammatical in their own right. They’re not what you’d use in a business letter or ceremonial speech, but why would they be? Different domains of expression have their own norms: it’s presumptuous and preposterous to impose one set on all others.

Songwriters draw on genre conventions and their own dialects, both of which they may play with and subvert. Insisting on formal standard English all the time is like prescribing formal attire 24/7. It’s like saying E. E. Cummings ought to fix his formatting, or demanding that jazz obey 2/4 time. No wonder peevers can’t get no satisfaction.

This entry was posted on Tuesday, June 19th, 2012 at 2:46 pm and is filed under dialect, grammar, language, music, usage, writing. You can follow any responses to this entry through the RSS 2.0 feed. You can leave a response, or trackback from your own site.

46 Responses to Is you is or is you ain’t bad grammar?