Who’s confused by whose confusion?

The following exchange appears in Jonathan Lethem’s novel Girl in Landscape (on p. 208 of my Faber and Faber edition, 2002):

Who’s is a contraction of who is or who has (or occasionally who was): Who’s going? Who’s got tickets? Looks who’s talking; whereas whose is a possessive pronoun – it’s who in the genitive case – so it should have been used in the quoted passage: whose fault is that?

Confusion arises because who’s and whose are pronounced identically, and also because the ’s in who’s can mislead people into thinking it has to do with possession: If the cap isn’t Jo‘s or Jim‘s, then whose is it? (This apostrophe-led impression of possession probably also inspires the erroneous your’s, her’s, our’s and their’s.)

Who’s for whose is a common mistake in informal writing, and it sometimes sneaks past editors too. To keep who’s in its rightful place, you can use the same mnemonic I recommended for it’s and its: just as it’s always means it is or it has, so who’s means who is or who has. Bring this to mind any time you’re uncertain, and you shouldn’t slip up.

I liked Girl in Landscape, incidentally; it’s a coming-of-age story in a sci-fi setting with elements of mystery and western. It also has examples of dialectal would of (We should of killed them; you’d of met him), which I wrote about recently. I’m not a fan of the construction, but since I’ve seen it in dialogue from several capable authors, I’m inclined to give them the benefit of the doubt. But I can’t say the same for who’s fault.

Another example of the mistake, this time in the Guardian (‘EDM’s shameful secret: dance music singers rarely get paid’, 6 August 2013):

And in Seth’s graphic novel It’s A Good Life, If You Don’t Weaken: 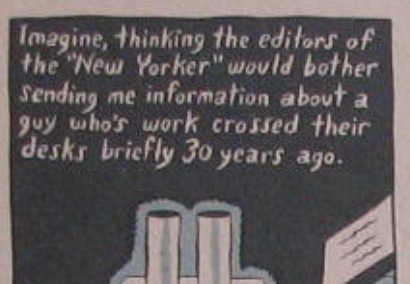 Less commonly, the confusion occurs the other way around, as in this article in the Belfast Telegraph: 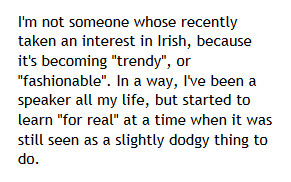 And in Heavier Than Heaven, Charles R. Cross’s biography of Kurt Cobain:

This entry was posted on Monday, December 17th, 2012 at 8:21 pm and is filed under grammar, language, spelling, words. You can follow any responses to this entry through the RSS 2.0 feed. You can leave a response, or trackback from your own site.

18 Responses to Who’s confused by whose confusion?