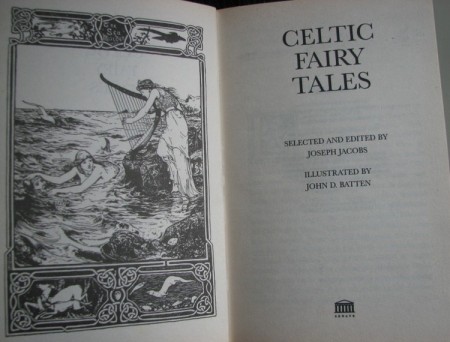 The book is a delight, and I may return to its contents for future posts. But first, some cultural geography. In his endnotes to Celtic Fairy Tales, Jacobs writes about how stories and their elements crop up again and again around the world, different cultures having borrowed and adapted them to suit their local customs and vernacular traditions.

This process is naturally uneven, with geography and language prominent among the factors influencing the degree of overlap:

The interesting thing to notice is the remarkable similarity of Scotch and Irish folk-tales. The continuity of language and culture between these two divisions of Gaeldom has clearly brought about this identity of their folk-tales. As will be seen from the following notes, the tales found in Scotland can almost invariably be paralleled by those found in Ireland, and vice versa. This result is a striking confirmation of the general truth that the folk-lores of different countries resemble one another in proportion to their contiguity and to the continuity of language and culture between them.

So a recent study of folktale diffusion and variation, ‘Population structure and cultural geography of a folktale in Europe’, published in Proceedings of the Royal Society B, is pleasingly timed.

The researchers* drew on theories and methods from population genetics to analyse 700 variants of a folktale (‘The kind and the unkind girls’) from 31 ethnolinguistic populations in Europe, each having an average of 23 variants. From the Abstract:

We find that geographical distance and ethnolinguistic affiliation exert significant independent effects on folktale diversity and that variation between populations supports a clustering concordant with European geography. This pattern of geographical clines and clusters parallels the pattern of human genetic diversity in Europe, although the effects of geographical distance and ethnolinguistic boundaries are stronger for folktales than genes.

Included in the paper is a NeighbourNet, pictured below, in which the closer the populations, the more similar their folktales tend to be; “box-like structures show the reticulate nature of folktale similarity, indicating extensive horizontal transmission (as opposed to vertical transmission down cultural lineages).” 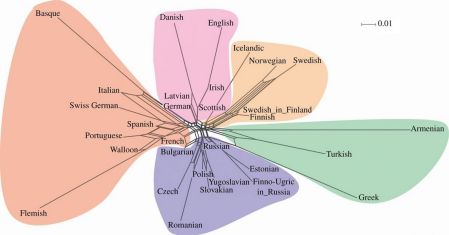 Nature News, reporting on the study, played up the sex angle (as though comparative folklore were not sufficiently enticing), its subheading saying that “people would sooner have sex with strangers than tell their fables”, and so on. But it’s a useful article if you don’t want to read the full paper.

Some of Joseph Jacobs’ books, incidentally, including the two I mentioned, are available online at SurLaLune and Project Gutenberg.

This entry was posted on Wednesday, February 6th, 2013 at 11:01 pm and is filed under books, language, language history, literature, science, stories. You can follow any responses to this entry through the RSS 2.0 feed. You can leave a response, or trackback from your own site.