The dramatic grammatic evolution of “LOL”

LOL, the poster child of txtspk and internet lingo, began as a handy abbreviation for laughing out loud (and sometimes lots of love). But it has come to symbolise a whole mode of discourse: LOLspeak is a quasi-dialect unto itself, albeit mainly the preserve of unwitting LOLcats.

Some people even say lol offline to indicate amusement without having to go to the trouble of laughing. (I’m sure these people laugh normally, too.) But there’s more to LOL than meets the eye. Anne Curzan writes at Lingua Franca that the meaning of LOL has changed – it often doesn’t mean laughing out loud. You might have noticed this.

LOL is now a way to flag that a message is meant to be funny (similar to jk – ‘just kidding’) or to signal irony. LOL can also be a way to acknowledge that a writer has received a text – a written version of a nod of the head and a smile (“a chuckle at most,” one student told me). 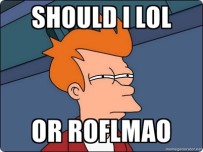 I never adopted LOL myself, but I see it regularly in texts, forums, tweets and the like, and I’m pretty certain it doesn’t convey actual laughter most of the time. Unlike Curzan, I think it retains its real-laughter sense, but it has definitely broadened in meaning: to a nod of the head or a marker of irony or humour, as she says – and more besides.

Linguist John McWhorter has been studying this. He calls LOL “the texting equivalent of black English’s yo, a nugget of new colloquial grammar establishing a warm shared frame of reference”. In a TED talk (video below), he makes a persuasive case that texting isn’t so much writing as “fingered speech” with its own grammar. An example of this grammar is LOL.

McWhorter, like Curzan, feels that LOL hasn’t meant laughing out loud for a while now (I think it still does, but only sometimes). Referring to the phrases LOL it’s raining and LOL I’m inside the library; LOL I know, it’s been a long day, he points out that “no one guffaws that much. That’s not what these LOLs mean.” He continues:

If you look at the LOLs from the perspective of a geeky linguist looking for structure, what the LOLs are, are particles which indicate that the speaker – so to speak – and the addressee are sharing a certain context of interpretation, i.e., you know what this nasty day is like; You know what it’s like being in the library. That is a piece of grammar.

So LOL has been grammaticalised. It’s now a pragmatic particle, what McWhorter in a more recent talk (not yet online) calls a marker of empathy and accommodation.

Whether used like this or in the more traditional way, LOL is not “gibberish”, as a commenter here recently complained. You don’t have to like it or use it, but it’s an interesting communicative development deserving of study, not casual contempt.

How do you use LOL? Or if you don’t, how do you feel about it?

And did you notice McWhorter’s double copula? Not your garden variety is is, either!

This entry was posted on Tuesday, March 5th, 2013 at 10:39 pm and is filed under grammar, language, linguistics, pragmatics, semantics, speech, usage, words. You can follow any responses to this entry through the RSS 2.0 feed. You can leave a response, or trackback from your own site.

48 Responses to The dramatic grammatic evolution of “LOL”