Living with Herds: a vocalisation dictionary

This short observational film (9 min.) by Natasha Fijn, research fellow at the Australian National University, will appeal to anyone interested in animal behaviour, interspecies communication, or biology or anthropology generally.

Fijn describes it as “a visual dictionary showing how Mongolian herders vocalise to their herd animals, followed by the response of the herd animal(s)”:

The video is an appendix to Fijn’s book Living with Herds: human-animal co-existence in Mongolia. This was the subject of her academic thesis, which focused on animal domestication, in particular the human–ungulate relationship.

During fieldwork she lived with two extended herding families and herds of different animals in the Mongolian mountains, where:

In a land of extreme conditions, both herder and herd animal depend upon one another as a means of survival. Within broad river valleys, beneath steep slopes with patches of forest, herd animals are free to roam, existing within their own complex social structure and hierarchy. Herders successfully integrate themselves within this herd social structure by taking the role of lead animal within the herd, socially engaging and communicating daily in constant cross-species, cross-cultural, human-other animal dialogue.

The vocalisation dictionary is part of Fijn’s independent ethnographic film Khangai Herds (90 min.), whose other sections may be viewed here (also the source of the quoted paragraph). 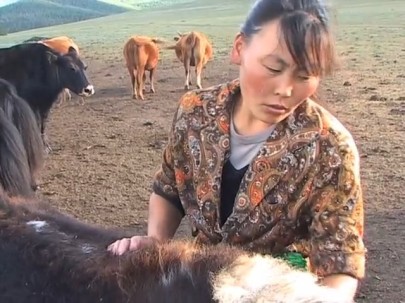 Tip of the all-weather hat to Bree Blakeman.

This entry was posted on Thursday, May 30th, 2013 at 9:35 am and is filed under animals, film, speech. You can follow any responses to this entry through the RSS 2.0 feed. You can leave a response, or trackback from your own site.

8 Responses to Living with Herds: a vocalisation dictionary