Book review: Netymology: From Apps to Zombies, by Tom Chatfield

Given the perennial popularity of linguistic declinism, a common contemporary version of which is “the internet/texting is destroying language”, it comes as a relief and a pleasure to read a balanced appraisal of internet language itself. Tom Chatfield’s new book Netymology: From Apps to Zombies is a sensible, fascinating, and enthusiastic exploration of the origins and usage of digital terminology; in its own words, it’s a linguistic celebration of the digital world.

Whether you’re a l33t user or a relative n00b, you’ll find much to enjoy and ponder in Netymology. Its 100 short chapters, each 2–3 pages long, offer informative snippets on such cultural byroads and subcultural thoroughfares as the mechanics of keyboards, the Beasts of Baidu, the origins of Pac-Man’s name, and the Vatican’s patron saint of the internet (really), to take a few examples virtually at random.

Netymology covers a lot of ground but is never heavy going. From a wealth of sources it plucks and condenses choice nuggets of technological history, such as the eccentric story of Apple’s command key, aka pretzel key or splodge (⌘):

Known properly as the St John’s Arms, it’s an ancient, knot-like heraldic symbol, dating back in Scandinavia to at least 1000 BC, where it was used to ward off evil spirits and bad luck.

It’s still found today on Swedish maps, representing places of historical interest, thanks to its (approximate) resemblance to the tower of a castle viewed from above.

I don’t know why I never looked into the etymology of font before, but here we have a vivid and satisfying summary. It derives ultimately from Middle French fonder “to melt”, referring to our former need to melt lead so we could make casts of letters for printing. “Technological times may change fast,” Chatfield writes, “but words have their own momentum”, and font “carries a half-millennium of history with it”. 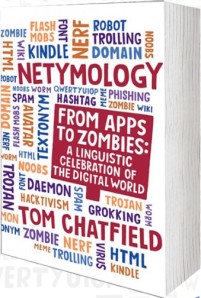 As a source of facts and guidance on internet history and culture, the author is engaging and dependable; and as an avid gamer he is particularly strong on its idiosyncratic and “highly functional” lingo, supplying helpful glosses on munchkins, griefers, and carebears, among other curiosities. Being only a very occasional gamer, and then mostly offline, I appreciated these insights.

Gamer slang, we are told, “abound[s] with labels for different playing styles” and is “especially rich in terms (and boasts, and taunts) for how much better or worse various Elvish enchantments make your character”. Take nerf, where being nerfed means having one’s powers reduced:

A pleasingly onomatopoeic word – with hints of both ‘nerd’ and ‘worse’ – nerf is also a young term, tracing its roots to the cult 1997 game Ultima Online. . . . At one point in the game’s history its designer, Raph Koster, hosted an online chat to discuss the relative ineffectiveness of weapons like swords in the game as compared to bows or magical spells. Koster promised he would look into the problem of what he called ‘nerf swords’ – a tongue-in-cheek reference to a popular brand of toy foam sword, whose name came from the acronym ‘Non-Expanding Recreational Foam’.

Unknowingly, Koster had gifted the gaming world a key term – and one that’s now enshrined in its professional vocabulary, with game designers and companies regularly debating how to ‘nerf’ over-powered aspects of a game’s mechanics.

This is one of several entries that show how words coined playfully or even whimsically can fill a linguistic gap and so become adopted as part of a wider lexicon. From here, they may seed other coinages. Chatfield observes that for the first time ever “we live in a culture not only of mass literacy (itself a relatively recent revolution), but of mass participation in written discourse.” You could say that lexical innovation itself has become a massively multiplayer online activity.

Chatfield is slightly less sure-footed on linguistic matters. He calls fairytale and lifehacking portmanteau words, but these are compounds; there’s no blending involved. His explanation of eggcorns falls short: it’s not enough to “[substitute] one near-identical sounding word or phrase for another” – that could be a malapropism. Eggcorns are characterised by the fact that the misanalysis makes a kind of naive or intuitive sense.

A couple of entries are unnecessarily padded. Half a page on the contents of omnomnomnom.com feels excessive, and I don’t need to be told that an Urban Dictionary entry calls Douglas Adams a great writer. Typos are rare, and are more easily forgiven in a book describing typos as a force for innovation, as in teh and pwn.

Minor shortcomings aside, Netymology is a consistently interesting and much-needed survey of the digital vernacular. It will be appreciated by word lovers and language buffs, amateur anthropologists and internet users of all stripes regardless of their familiarity with the terrain – that is, by digital immigrants and digital natives alike. Speaking of which:

it’s interesting to speculate what it means to possess once-radical technologies as a birthright. What’s also interesting . . . is the sense in which words like ‘native’ implicitly cast digital technologies as a landscape, or even a land, into which it is possible to be born as a kind of citizen: technologies that are not so much mere tools as a space within which living itself occurs.

Times can be defined by their technologies, and ours is conspicuously digital. Netymology sweeps capably from the earliest days of computing (and earlier still) to the newest technological trends and ideas, like Google Glass and Bitcoin. It covers abbreviations (TL;DR, ZOMG) and affixes (meta-, cyber-), fads (owling, flashmobs) and fails (Scunthorpe problem, Streisand effect), cookies and CamelCase, geocaching and typosquatting and a whole lot more.

Disclosure: The author kindly sent me a copy of his book.

This entry was posted on Friday, June 7th, 2013 at 9:46 pm and is filed under book reviews, books, etymology, language, language history, words. You can follow any responses to this entry through the RSS 2.0 feed. You can leave a response, or trackback from your own site.

5 Responses to Book review: Netymology: From Apps to Zombies, by Tom Chatfield