Raymond Chandler on storytelling and style

I’ve begun reading Raymond Chandler’s Philip Marlowe, an anthology of 23 Marlowe stories written by different crime/mystery authors plus one by Chandler himself (‘The Pencil’). It was edited by Byron Preiss with the consent of the Chandler estate, to mark the 100th anniversary of the author’s birth.

Taking on Marlowe is a tall order, but I expect even the weaker stories will offer much to please and interest. The introduction, by Chandler biographer Frank MacShane, quotes from a letter Chandler wrote in his late fifties in which he muses on writing and style. I found more of the letter elsewhere, and it’s too good not to excerpt at length:

One of my peculiarities and difficulties as a writer is that I won’t discard anything. I can’t overlook the fact that I had a reason, a feeling, for starting to write it, and I’ll be damned if I won’t lick it. 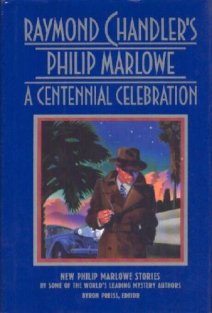 Another of my oddities (and this one I believe in absolutely) is that you never quite know where your story is until you have written the first draft of it. So I always regard the first draft as raw material. What seems to be alive in it is what belongs in the story. A good story cannot be devised; it has to be distilled. In the long run, however little you talk or even think about it, the most durable thing in writing is style, and style is the most valuable investment a writer can make with his time. It pays off slowly, your agent will sneer at it, your publisher will misunderstand it, and it will take people you have never heard of to convince them by slow degrees that the writer who puts his individual mark on the way he writes will always pay off. He can’t do it by trying, because the kind of style I am thinking about is a projection of personality and you have to have a personality before you can project it. But granted that you have one, you can only project it on paper by thinking of something else.

This is ironical in a way: it is the reason, I suppose, why in a generation of ‘made’ writers I still say you can’t make a writer. Preoccupation with style will not produce it. No amount of editing and polishing will have any appreciable effect on the flavour of how a man writes. It is the product of the quality of his emotion and perception; it is the ability to transfer these to paper which makes him a writer, in contrast to the great number of people who have just as good emotions and just as keen perceptions, but cannot come within a googol of miles of putting them on paper.

Preoccupation with style will not produce it – words for any writer to live by. Whatever alchemical magic keeps readers enthralled when they’re reading and impatient when they’re not, it can’t be forced. Readers detect the strain instead of disappearing into the story. You have to get out of your own way.

Katherine Anne Porter said something similar to Chandler in a Paris Review interview about style corresponding to personality (“everybody has said it since [Aristotle], because it is one of those unarguable truths”), but I’ll reserve that for another day.

As an aside, it’s not often I see googol used in nontechnical writing. Nowadays the word is commonly associated with Google, whose company name began as a misspelling of the mathematical term.

This entry was posted on Sunday, August 4th, 2013 at 11:02 am and is filed under books, literature, writing. You can follow any responses to this entry through the RSS 2.0 feed. You can leave a response, or trackback from your own site.

12 Responses to Raymond Chandler on storytelling and style