It started on Twitter, as these things often do. I read a comment about linguists and lexicographers being to language ‘what grave robbers are to archeology’ (the context: hatred of the newly popular because X phrase), and I tweeted it with a raised eyebrow.

Jonathon Owen replied that he wished he’d been given a ‘leather jacket, bullwhip, and fedora’ upon graduation, James Callan said he wanted to see an ‘Indiana Jones pastiche focused on a linguist’, and I felt it was a meme waiting to happen. So without further ado, let me introduce Indo-European Jones (or Indy for short).

James got the ball rolling (click on images to enlarge):

I jumped on the meme-wagon: 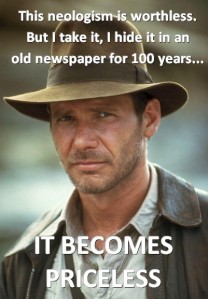 And more of mine follow, for silliness’ sake. Apologies to Jonathon for this next one – I think vowels works better as an echo of powers: 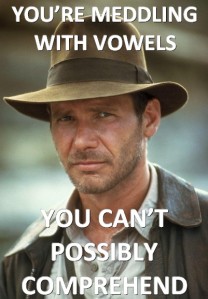 These all refashion lines from the films, but if you take a notion to modify the meme some other way, please do. Here’s the blank image I used. (Font style: Calibri, white, engraved.)

Via Twitter, @ecormany offers: ‘we named the dog Indo-European…’; and @TSchnoebelen suggests: ‘I think it’s time to ask yourself…does your predicate presuppose the proposition it introduces is true?’

From @glossaria – because ‘Indy needs a partner’: 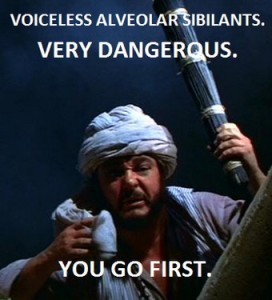 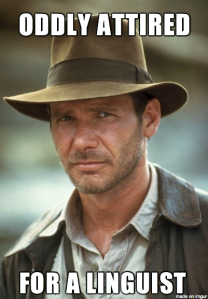 Four more from @ChadNilep, with pics: 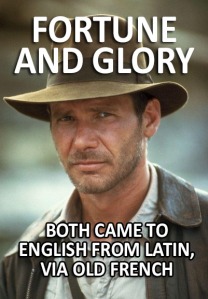 Language Hat, after following up on this post, said his wife liked my first Indo-European Jones so much (Nothing shocks me… I’m a linguist), she put it up as a poster in the kitchen. Here’s a photo he sent:

This entry was posted on Monday, January 6th, 2014 at 10:58 pm and is filed under film, humour, language, linguistics, wordplay. You can follow any responses to this entry through the RSS 2.0 feed. You can leave a response, or trackback from your own site.