Chambers Slang Dictionary by Jonathon Green is my usual first stop for slang queries and browsing, because it’s the biggest such book on my shelf – size matters in lexicography – and also the best. A quote on the spine says, “Dr. Johnson would have moaned with delight”, and while I could live without the thought of Samuel Johnson making pleasure-noises on my shelf, the sentiment holds.

2010 saw publication of the eponymous Green’s Dictionary of Slang, a three-volume behemoth based like the OED on historical principles, giving slang the deep scholarship it deserves – and more than it has ever received before. Green has since updated thousands of its entries in his database, but since GDoS might not see a revised print edition, I only hope it goes online. [Edit: it has done, for subscribers.]

Green’s life and work are the twin topics of his new book Odd Job Man: Some Confessions of a Slang Lexicographer, kindly sent to me for review by Jonathan Cape in London. It aims “both to demystify ‘the dictionary’ and to give some glory to slang, one of language’s most disdained of subsets.” These modest aims it achieves, and then some: this is a belter of a book.*

“Mr Slang”, a nickname conferred by Martin Amis and since “paraded shamelessly in all publicity”, is apt. Green is besotted with slang and utterly at home in the odd job of slang lexicography; work and life are inextricably entangled. Early chapters of Odd Job Man are personal, later ones more focused on slang, but each bleeds into the other.

His life begins with drama and is not short of it thereafter:

you are born. Nobody asked me, as they say, but it happens. It is long and for your mother painful and you bear the scars. 1948: high forceps. Your father is informed: we can’t save them both. He begs to differ. Fortunately or otherwise he prevails. . . . Your mother, consciously or otherwise, does not forgive you. There will be no more children.

Green, though of mixed-European background, is uncertain of his ancestry: “I may know my signature, I have been putting it in my books for over fifty years, but I do not know my own name.” He has a way of delivering such details in prose that hums with meaning but never feels burdened by implication or invocation.

His account of growing up is impressionistic, sketching events and inferring patterns rather than attempting anything systematic. There is an early attraction to words: the best thing about visiting his relatives as a five-year-old is the word Shufflebotham’s inscribed across a terrace-end. And there are formative encounters with slang: Polari on the radio, Wodehouse and Sapper in the school library:

What my consumption of yesterday’s popular potboilers made clear, again subconsciously, was that if you wanted interesting language, you weren’t going to get it along the straight and narrow. The good stuff was off down the alleyways, along the waterfronts, in the back rooms of addresses whose frontage would in real life scare you far away.

Other influences are identified and explored: ’60s counterculture, Jewishness (“Perhaps to cherish a marginal language you must be yourself marginal”), and underground journalism – though Green acknowledges problems with both parts of that phrase. Though no hermit he usually opts for “voluntary solitude”, to which as an only child he is accustomed. It suits what becomes his life’s work (slash work’s life).

Slang is a slippery beast, “innately imprecise” and difficult to pin down or fence; existing definitions of it are more or less helpful but invariably deficient. The best solution may be to consider it from as many angles as possible, and Odd Job Man goes some way towards doing this, in consistently engaging fashion.

Green obsesses over slang, and his descriptions of it are fertile, provocative and complex: slang as the great doubter, the rebellious naysayer, vicious and amoral repository of outsider street lingo; slang as “linguistic patricide”, slaughtering its predecessors; slang less a linguistic phenomenon than a psychological one, “the linguistic id”:

Given its position on the margins one might see it as a means of self-affirmation: I denigrate/blaspheme/utter obscenities, therefore I am. Shouting dark words into the darkness of the world. Slang is aggressive, angry. It is frustrated by the way the world works, by the hypocrisy of the powerful. It is cynical but its cynicism is that of the failed romantic.

Like slang itself, the author (or his persona) is trenchant, subversive, and wryly self-conscious, an ideal host for the subject matter. Wordplay is deft and multipurpose: on the fallibility of slang lexicography he says his citations “should not be taken as gospel. Or rather, that’s exactly what they should be taken for: a concoction created to persuade.”

In many ways the internet has, for good or ill, democratised authority. Urban Dictionary is “relativism epitomised”, says Green, yet “awe is one thing, intellectual trust is quite another”. But while the net has made his task infinitely more daunting, it has also simplified it. Gone are the thousands of handwritten citations, replaced at a stroke by computer. In 1984 he threw them in a skip; “A passing tramp extracted one, read it and spat.” 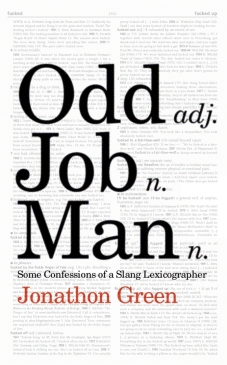 Odd Job Man reveals the nuts and bolts of slang lexicography, reflecting on peers, publishing, plagiarism, and practicalities, the question of authority, the nature of definition, how the work differs from regular lexicography. He wades into its sometimes vexed etymologies, not least that of slang itself (“I sympathise with the need for popular etymology, but still despise it”), and the occasional frustration of indecipherable slang.

Offsetting these snags is the sheer fun of working in the milieu: the scholarly thrills and sordid spills; the joy of ordinary research, inasmuch as reading for slang can be considered ordinary. Such material proliferates: while it may be possible to read just about all the published slang from a period some centuries back, Green knows he cannot now keep up: “GDoS scratched the surface, now we are starting to burrow.” He says that like every lexicographer he is:

running a marathon that never ends. It was ever so: a dictionary is ‘finished’ only to accommodate the dictates of a publisher’s deadline and language merely laughs at the exhausted drudge and moves on.

A word of caution for sensitive readers. Strong language is used, and especially mentioned, throughout. This is to be expected given that Green has catalogued 5012 slang terms relating to crime, 4589 to drink, 3976 drugs, 1740 sex, 1351 penis, 1180 vagina, 831 death, 570 national/racial abuse, 540 excretion, etc.** Lest you suppose him inured to slang’s aggressive effect, certain terms do make him wince. Just two, mind.

Green’s memoir-of-sorts Odd Job Man is bracingly informative and compulsively readable, like a good slang dictionary, while presenting its critical, autobiographical and existential considerations in a bold and thoroughly quotable style: I recommend it highly to anyone interested in slang, dictionary-making, and non-standard language usage. You can order it from Random House UK / Australia, or Amazon.

** I expect some of these figures have grown in the months since the book was written.

This entry was posted on Wednesday, March 19th, 2014 at 7:58 pm and is filed under book reviews, books, language, lexicography, slang, words. You can follow any responses to this entry through the RSS 2.0 feed. You can leave a response, or trackback from your own site.