Earlier this year Ragan.com published an article titled “15 signs you’re a word nerd”. Alongside a couple of unobjectionable items (You love to read; You know the difference between “e.g.” and “i.e.”) and some that didn’t apply to me (You have at least three word games on your phone) were several that I got stuck on:

Typos and abbreviations in texts drive you a little crazy.

No, not even a little. There are more than enough things in the world to be bothered by without getting worked up over trivial mistakes and conventional shortcuts in phone messages. (I assume texts here is short for text messages: obviously the “good” kind of abbreviation…)

It’s a question of register. How formally correct our language is, or needs to be, depends on context. Text messages seldom require standard English to be fully observed, and most people who text me have no difficulty code-switching appropriately. Nor do I have any difficulty coping with this informal variety of the language. Next!

You can’t look past spelling and punctuation errors on signs and restaurant menus.

As a word nerd I find it very easy. I’m not editing these signs, or correcting them for an exam. Sure, some mistakes are glaring. But maybe the person responsible for them wasn’t blessed with as much education or training as the peever, or isn’t a native English speaker.

Even without such an excuse, it’s no big deal so long as the intended message is clear. Obviously businesses should have their printed material proofread – I do this professionally, after all. But when I’m out buying fruit and veg and see grocer’s apostrophes, I may notice but I really could(n’t) care less. There’s no confusion, and I’m off-duty.

Other “signs you’re a word nerd” include the following:

If you don’t already own these grammar correction stickers [commercial link], you just added them to your wish list.

You may or may not carry a red pen to correct egregious errors on the fly.

“May or may not carry a red pen” covers all possible scenarios, so it’s not a sign of anything. Disregarding the hedge: Some people add apostrophes to official signs. Others diligently amend handwritten notices. I think doing this without invitation, whether with red pen or stickers, is presumptuous at best, and quite possibly rude.

Making a song and dance about minor errors in unedited and informal writing seems to serve the self-righteousness of the complainer more than the edification of the writer or the good of the language. English needs no protecting, and can be celebrated without fussy judgement of trivial mistakes. (When I tweeted this, an editor in the US told me erroneously that I’d misspelt judgment. Read into that what you will.)

Sticklers are precious about correctness, often seeking to impose a narrow conception of it universally. They see nothing wrong with casually disparaging anyone who makes a mistake (i.e., everyone) or who doesn’t meet their exacting standards. I don’t claim to understand the motivations for this severity, though I have some ideas.

A library book in Galway (Alan Watts’s “What is Zen?”) defaced by a misguided stickler-turned-vandal

It’s a popular stereotype, the language lover or word nerd or grammar geek who is comfortably contemptuous of error and even of legitimate variation. A more recent article on Ragan.com, “12 most unforgivable writing mistakes”, peeves about singular they and misspellings like affect/effect. To call these unforgivable is preposterous and cheap.

This is one reason people are nervous and diffident about grey areas in language and “grammar mistakes”: they associate them with petty pedantry over obscure distinctions and derision over trifling slips. Copy editors, as John E. McIntyre remarked today, are familiar with the unfortunate “I’d better watch my language” reaction to our tribe.

Language learners and less educated native speakers especially can feel anxious and self-conscious about usage, and this is made worse by the antisocial intolerance and condescension that pass for mainstream sociolinguistic attitudes.

Linguistic mistakes are not shameful. Quite the opposite: they may shed light on the physical or cognitive machinery of language production, or broaden our understanding of non-standard usage (and, indirectly, of cultural etiquette). So why be a grouch? 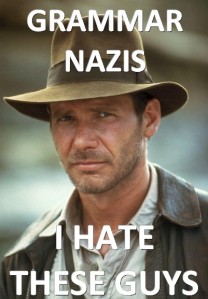 This entry was posted on Wednesday, April 2nd, 2014 at 9:22 pm and is filed under editing, grammar, language, punctuation, signs, typos, usage, writing. You can follow any responses to this entry through the RSS 2.0 feed. You can leave a response, or trackback from your own site.

33 Responses to Language police: check your privilege and priorities