Everyone came home from England was questioned. (Timothy O’Grady, I Could Read the Sky)

Contact clauses are dependent clauses attached directly to their antecedent, i.e., without any relative pronoun. For example: a book I read; the town we visited; a person you admire. In each case that, which or who might be added after the noun phrase, but doesn’t have to be.

Otto Jespersen introduced the term, calling them contact clauses “because what characterizes them is the close contact in sound and sense between the clause and what precedes it”.

It is a very old construction in English. Though fully standard, it drew criticism in the 18th century from grammarians who sought to impose Latin grammar on English. Latin grammar requires a relative pronoun in this context; thus Lindley Murray called it “omitting the relative” and advised against it.

Contact clauses are still sometimes called omitted relatives, but it’s more a partial overlap than a precise synonymy, and it may also be a bit misleading. Jespersen again, on the construction’s nature and vintage (from A Modern English Grammar on Historical Principles, part III, 1927):

It is customary in these cases to say that the relative pronoun who (whom) or which is “understood” or “omitted”, and the clauses are called elliptic. But here as so often in grammatical disquisitions these terms really explain nothing. I very much doubt whether anyone without any grammatical training would think that anything is left out in the sentences mentioned above. If we speak here of “omission” or “subaudition” or “ellipsis”, the reader is apt to get the false impression that the fuller expression is the better one as being complete, and that the shorter expression is to some extent faulty or defective, or something that has come into existence in recent times out of slovenliness. This is wrong: the constructions are very old in the language and have not come into existence through the dropping of a previously necessary relative pronoun. 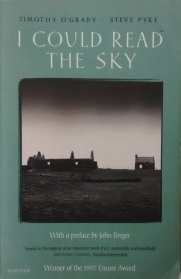 What prompted me to look into contact clauses is a book I read recently called I Could Read the Sky, by Timothy O’Grady and Steve Pyke. It is a sad and lyrical novel about emigration, loss, and our deep connection to place.

Throughout, there is regular use of contact clauses of a particular type, where the absent relative pronoun would be the subject, not the object: hence subject contact clause, a term I adopt here.

The construction is uncommon in standard English but characteristic of colloquial Irish English, and may be seen in some of these examples from O’Grady and Pyke’s book:

1. It was Pat Creevy told me about the abattoir.

2. The well in the long field. Matt says there’s a fish in it will tell you how your relations are doing in America.

3. But my mother says he’s started teaching the flute to a young lad named Wilson comes in to him on a bus from eleven miles away.

4. Between the young people in the pews and the men kneeling in the back is the young Protestant boy was taking lessons from Da in the flute.

5. Everyone came home from England was questioned.

6. In the beet factory in Ipswich I took the name J. Brady after the name was written in the back of the coat Ma bought me at the fair.

7. He called himself Gallagher after a Donegal hurler and I called myself Rose after one of the men made the flute that was buried with Da.

8. Francie got hit with a lump of concrete flew off the end of the jackhammer.

9. There was a site in Barnet must have been four acres anyway and there it was mostly shuttering.

10. Anybody didn’t move fast enough he cursed them.

11. On the top floor is a man from Belfast always wears a suit and a tie.

12. You’d think it was the room of a man would drive a car for a bishop only for the pictures of women in frames along the shelf above his bed.

13. He’s a suit and tie on, everything in place, and he’s wearing the gold crown was up on the shelf above his bed.

14. There was a window came out through the slope of the roof and I remember a tall glass there filled with irises.

15. He has a son my age told me that old Peter put out a report to the farms beside him…

That should be enough to give an idea of subject contact clauses in Irish English. Jespersen said it’s not common “except in some well-defined instances, chiefly after it is, there is (are), here is (are)”, e.g., Oscar Wilde’s I wonder who it was defined man as a rational animal. But the examples above show far more diverse usage.

Numbers 6 and 7 could be misread by inferring after as having to do with time. It’s not “after the name was written” but “after the name that was written”; and it’s not “after one of the men made the flute” but “after one of the men who made the flute”. No. 5, which also appears at the top of this post, is a nice garden path sentence.

The Oxford Dictionary of English Grammar says “subject relative pronouns are not now normally omissible”. In other words that, which or who would normally appear in 1–15 above. It offers the examples Who was it said ‘Inside every fat man…’ and There’s someone at the door says you know him. These, however, would be quite typical of vernacular Irish speech.

ancient structures of independent origin, not just relatives with pronouns left out. . . . At the beginning of II [the period 1570–1770] . . . they were still extensively used where the ‘relative’ had subject function, as in Shakespeare’s I see a man here needs not live by shifts. This is ambiguous . . . . There was good reason for confining the structure to object relations, where there is no ambiguity (as in Defoe, the same trade she had followed in Ireland): since the 18C this limitation has been customary.

Except, as we have seen, in Ireland.

Jeffrey Kallen’s paper ‘The English Language in Ireland’ [PDF] provides examples from J.M. Synge (It was my own son hit me) and others. He points out that lines such as I had three aunts nurses (i.e., I had three aunts who were nurses) show that “particularly with the copular verb be, it is more than just the complementiser which may be deleted”.

Subject contact clauses are familiar to me, both in my own (occasional) usage and that of others around me in the west of Ireland, but I’m still getting my head around the formal analysis. And I haven’t even mentioned prepositions and clefts, but this post is long enough already.

One last thing worth noting: Contact clauses are similar to apo koinou (Greek for “in common”), a construction consisting, writes Robert Burchfield, “of two clauses which have a word or phrase in common. A standard example (cited by Visser) is I have an uncle is a myghty erle, in which an uncle is the object of I have and also introduces the following clause.” It is common in Shakespeare’s writing, less so nowadays.

Here are two more I’m just after reading, in Mary Beckett’s short story collection A Belfast Woman, from the story of the same name:

17. There was a young doctor in the hospital asked me did I need a tranquilliser or a sleeping tablet or something to get over the shock.

Sociolinguist Matt Gordon, on Twitter, let me know that African American Vernacular English also has this feature, and shared a link to a short paper [PDF] by John Rickford on AAVE phonology and grammar. The relevant passage:

I’ve also come across some lovely examples of double subject contact clauses, where two are strung together in one line. Elmore Leonard, Freaky Deaky:

“You looking for somebody was here Saturday could be a witness, huh?”

“Was it Dick had the daughter married the fella of the Delaceys?”

This entry was posted on Friday, August 22nd, 2014 at 7:32 pm and is filed under dialect, grammar, Hiberno-English, Ireland, language, language history, syntax. You can follow any responses to this entry through the RSS 2.0 feed. You can leave a response, or trackback from your own site.