In an article in the Irish Independent this week on privatisation fears and political shenanigans, Gene Kerrigan used a great word borrowed (and anglicised) from the Gaelic:

Is it really okay for the Taoiseach [Irish prime minister] to do what he did, then he makes a non-apology and everyone moves on?

Did Enda Kenny lie to us?

You won’t find a straightforward statement in which he said he had nothing to do with the stroke. Instead, he said, “ministers are free to make nominations to particular boards”. Sleeveen language. Deliberately deceptive, while taking pains not to formally lie.

Despite appearances it can be used affectionately, like most Irish insults, but this is obviously not the case above, nor is it normally.

Sleeveen comes from Irish slíbhín ‘sly person’, to which Dinneen adds slighbhín. The Irish words’ s can be closer to /ʃ/ ‘sh’, so the spelling shleeveen is also used – as are sleveen, sleiveen, and slieveen. It’s often used in political contexts, and, like smacht, occasionally makes the headlines: 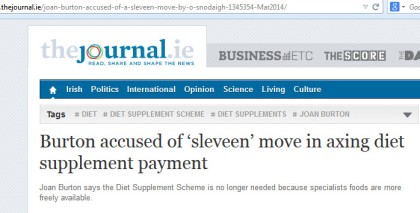 Slíbhín may derive from sliabh, Irish for ‘mountain’, plus the diminutive suffix -ín, however unfair this seems to small mountain-dwellers. Sliabh is the etymon proposed by most of the reference works I checked.

The roots of sliabh lie in physical geography. MacBain’s Etymological Dictionary of the Gaelic Language ties it to sleamhuinn ‘slippery, smooth’, and compares it with English slope and slip (cf. the Proto-Indo-European root *sleubh– ‘to slide, slip’, source of the sleeve into which we slip our arm).

P. W. Joyce, in English As We Speak It In Ireland (1910), offers the etymology slígh ‘a way’ + bin ‘sweet, melodious’: a sweet-mannered fellow. To this description he adds smooth-tongued, sly, and guileful, and says sleeveen is ‘universal all over the South and Middle’.

Whatever the precise origins of sleeveen, a century later it remains a popular, if niche, insult. Here are some examples from various sources:

He is a parish pump shleeveen of the worst sort. A man who will do and say anything to keep his seat.

Nidge ya little slieveen, always able to snake ur way out of trouble #LoveHate [Nidge is a character in Love/Hate, an Irish TV drama.]

This is the first time I’ve received any sort of invitation to a political fundraiser, and it turns out to be in aid of the aspirations of a catholic, sleeveen, poisonous asp.

Beamish manages to get up to some devilment while here, ambushing shleeveen rent collector Michael Feeney and relieving him of his takings…

Fianna Fail shleeveen deputies would be there in a shot if there was an allowance for it. [Fianna Fáil = an Irish political party.]

Lets see how well the arrogant Irish sleeveen publicans who have taken their customers for granted for so long deal with this one.

Sneaky self promoting shleeveen he definitely is.

That FG T.D. on #sixone is only a sleveen as well. Refused to answer a perfectly simple question from Bryan Dobson re voting for McNulty. [FG = Fine Gael, an Irish political party; T.D. = Teachta Dála, a member of the Dáil or lower house of Irish parliament; Six One = evening news on Irish TV.]

He struck me as being the Dáil 2.0 style of parish pump, sleeveen politician.

ah yeh collies, i wouldnt mind i grew up on a farm and we had severel of em and one bite me ,they are just a sleiveen of a dog an tds are the biggest sleiveens of time thats for damn sure

‘And she wouldn’t stand for to be chuffed up by any oul shleeveen. “Go way with yer plamas and yer grah-mo-crees,” she tell them all.’

…denounce me to your even weightier wife as a thief, a fly-by-night, a sleeveen and a baucaugh-shool. [travelling beggar, from Irish bacach siúil]

And playwright Hugh Leonard explained it briefly in Out After Dark:

‘That fellow’s a sleeveen,’ he said. It was a pejorative word meaning a little mountainy fellow, as treacherous as he was unpredictable.

Sleeveen also has dialectal currency in Canada. The Dictionary of Newfoundland English has several entries under various spellings, including sleeveen as a verb meaning ‘steal’. Its main entry has assorted definitions and examples.

Even so, it doesn’t appear to be well known: it stumped most of these Newfoundland hockey players:

This entry was posted on Wednesday, October 1st, 2014 at 3:33 pm and is filed under dialect, etymology, Hiberno-English, Ireland, language, words. You can follow any responses to this entry through the RSS 2.0 feed. You can leave a response, or trackback from your own site.

15 Responses to Sleeveen language in Ireland