‘Banning’ words is not an impulse I can relate to. My recent post at Macmillan Dictionary Blog, The vogue for banning words, takes issue with this popular practice:

Lists of words to ban make effective clickbait, because people are very conscious of language usage and can be wary of having their own usage policed. So they want to find out what words and phrases they should be avoiding and collectively hating. Many will join in, sounding off about words they’d like to see banned. The logic seems to be that because they simply don’t like a word or phrase, no one should ever, ever use it.

It was once customary for language critics such as Fowler, Partridge, and Gowers to warn writers about ‘vogue words’ which had become too fashionable for their own good. Nowadays the convention – even at Time magazine – is for ‘banning’ them, whatever that might mean. I find it reactionary and unhelpful.

My next post at Macmillan, Flat adverbs are exceeding fine, considers the status of adverbs like slow, far, wrong and bright, which lack the –ly we might expect from adverbs and which are unfairly condemned for that reason. The censure directed at them owes to the usual suspects:

[P]rescriptive grammarians in the 18th century, being overly attached to Latin grammar, thought flat adverbs were really adjectives being used incorrectly, and warned against their use. Before this, flat adverbs were more common and varied than they are now. Exceeding is a good example. If we browse Daniel Defoe’s writing we find such phrases as: weak and exceeding thirsty; it rained exceeding hard. Today this usage has an archaic feel.

Those early grammarians’ misguided judgements were passed down for generations. Their influence is felt today not only in the absence of many flat adverbs that were formerly routine, but also in the uncertainty and intolerance towards surviving ones…

What I mean by intolerance is, for example, people ‘fixing’ street signs that read Drive Slow, under the mistaken impression that it’s ungrammatical. In the post I also look briefly at whether and how some pairs of adverbs (one flat, one not) have diverged in usage, such as hard/hardly and safe/safely.

To browse my older Macmillan posts, you can visit the full archive here. 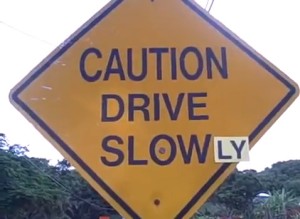 This entry was posted on Tuesday, December 16th, 2014 at 10:56 am and is filed under grammar, language, linguistics, signs, usage, words. You can follow any responses to this entry through the RSS 2.0 feed. You can leave a response, or trackback from your own site.