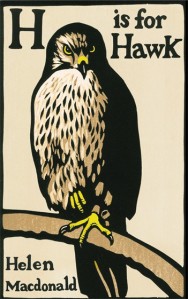 As a child I’d cleaved to falconry’s disconcertingly complex vocabulary. In my old books every part of a hawk was named: wings were sails, claws pounces, tail a train. Male hawks are a third smaller than the female so they are called tiercels, from the Latin tertius, for third. Young birds are eyasses, older birds passagers, adult-trapped birds haggards. Half-trained hawks fly on a long line called a creance. Hawks don’t wipe their beaks, they feak. When they defecate they mute. When they shake themselves they rouse. On and on it goes in a dizzying panoply of terms of precision.

Sometimes there was a sociolinguistic aspect to this jargon: ‘Knowing your falconry terminology attested to your place in society,’ Macdonald writes, and relays an example of T.H. White (whose haunting classic is spiritual kin to Hawk) worrying about what the proper word was for the whip, or crop, that he used on a hunt, ‘terrified he’d be found out because he kept forgetting his falconry terms’.

The half-hidden hierarchies of class that troubled White formed no part of Macdonald’s own early implication in the specialist lingo:

[T]he words weren’t about social fear when I was small. They were magic words, arcane and lost. I wanted to master this world that no one knew, to be an expert in its perfect, secret language.

This reminds me of something Eva Hoffman wrote about the formative effect her childhood visits to the library had on her, but I’ll save that for another post. You can find out more about H is for Hawk here, and even read the first few chapters. The striking cover art is by Chris Wormell.

This entry was posted on Wednesday, January 14th, 2015 at 10:14 am and is filed under animals, books, jargon, language, nature, words. You can follow any responses to this entry through the RSS 2.0 feed. You can leave a response, or trackback from your own site.

3 Responses to Falconry terms in ‘H is for Hawk’