From language to life 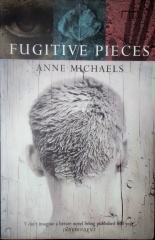 Just a quick post to praise Anne Michaels’ novel Fugitive Pieces, which I recommend without reservation. As a general reference point I might suggest Primo Levi, or Eva Hoffman’s Lost in Translation, but these are only approximate markers.

For a proper flavour of this extraordinary book, see her Guardian interview and the excerpts below, which I’ve chosen only because they’re language related; every page contains treasure of a different sort – on memory, loss, love, longing, pain, grace, and connection.

The narrator of part I, a Polish child hiding from Nazi forces in ‘a delirium of sleep and attention’, starving and terrified, remembers his sister, Bella, crying at the end of Jack London and Romain Rolland stories:

She wore the characters in her face as she read, one finger rubbing the edge of the page. Before I learned to read, angry to be left out, I strangled her with my arms, leaning over with my cheek against hers, as if somehow to see in the tiny black letters the world Bella saw. She shrugged me off or, big-hearted, she stopped, turned the book over in her lap, and explained the plot . . . the drunken father lurching home . . . the betrayed lover waiting vainly under the stairs . . . the terror of wolves howling in the Arctic dark, making my own skeleton rattle in my clothes. Sometimes at night, I sat on the edge of Bella’s bed and she tested my spelling, writing on my back with her finger and, when I’d learned the word, gently erasing it with a stroke of her smooth hand.

Ellipses are the author’s own.

The boy, now in Greece under the care of Athos, a geologist and humanist, reports on his efforts to learn English (‘The numb tongue attaches itself, orphan, to any sound it can’):

From puns I attempted poetry, hoping that in my sonnets the secret of English would crack open under my scrutiny. “Perhaps a sonnet,” suggested Athos, “is not dissimilar to the linguistic investigations of the kabbalists.” I copied out well-known poems, leaving space between each line where I wrote my own version or response. I wrote about plants, rocks, birds. I wrote lines without verbs. I wrote only using slang. Until suddenly a word seemed to become itself and a quick clarity penetrated; the difference between a Greek dog and a Canadian dog, between Polish snow and Canadian snow. Between resinous Greek pines and Polish pines. Between seas, the ancient myth-spell of the Mediterranean and the sharp Atlantic.

And later, when I began to write down the events of my childhood in a language foreign to their happening, it was a revelation. English would protect me; an alphabet without memory.

And finally a note on translation (Fugitive Pieces has itself been translated into many languages):

Translation is a kind of transubstantiation; one poem becomes another. You can choose your philosophy of translation just as you choose how to live: the free adaptation that sacrifices detail to meaning, the strict crib that sacrifices meaning to exactitude. The poet moves from life to language, the translator moves from language to life; both, like the immigrant, try to identify the invisible, what’s between the lines, the mysterious implications.

After mentioning it on Twitter I was recommended Michaels’ poetry, so I must take a look next time I’m in the library. Others who had read Fugitive Pieces were similarly impressed by it: I was not the only person to use the word ‘stunned’.

This entry was posted on Tuesday, September 15th, 2015 at 1:06 pm and is filed under books, literature, translation, writing. You can follow any responses to this entry through the RSS 2.0 feed. You can leave a response, or trackback from your own site.

9 Responses to From language to life