What should we call ‘Grammar Nazis’?

For some people the answer is in the question. Certainly Grammar Nazi is a popular and catchy phrase for referring to people who decry errors of grammar – or what they think are errors, or grammar – and who correct other people’s language unsolicited.

This looser, more general sense of nazi is well established in informal English. I’m not trying to outlaw it – that would make me a ‘nazi’ nazi. But personally I don’t like the term unless it’s used with heavy irony, because it cheapens and trivialises the horrific historical events that it blithely hijacks for rhetorical effect.

This comic by Kris Wilson slyly turns the tables:

Whatever about using Nazi hyperbolically in political contexts to refer to a non-actual-Nazi behaving in a way that may be construed as fascist, I can’t quite get my head around its casual use to refer to attitudes to language use. It has become conventional to the point where many people self-identify, even proudly, as a ‘grammar Nazi’.

Presumably when people do this they mean to convey that they use language carefully and expect others to do the same; that they take its rules seriously and abhor what they perceive as abuse of words, punctuation, and grammar. They probably love The Elements of Style and its officious, dictatorial tone. So a tongue-in-cheek nazi label may be intended to leaven the earnestness: I take grammar seriously, but not THAT seriously.

But when I see the word Nazi, preceded by grammar or not, I don’t automatically think of someone who is attentive bordering on fussy, who likes things done right, or who believes strongly in the importance of rules and rectitude. I think of racist sociopaths. Nazi just hasn’t been semantically bleached for me to a realm of harmless irony. And I’m surprised it has for people who profess such care for language use.

Maybe there’s a cultural element to it: I’m from Europe, the original home of Nazism, and I tend to see grammar Nazi used in US English. But I haven’t looked at this systematically. In any case my attempts at sarcastic criticism have not arrested the usage’s widespread adoption:

Grammar nazis are everywhere but you never hear about syntax despots or paragraph break serial killers.

So for those of us who write about grammar and usage and need to refer to this group, and for any self-identifying ‘grammar Nazis’ who may be thinking of dropping the designation, what alternatives are there?

I switch between different terms depending on the particular behaviour, motivation, or other local and arbitrary factors. In a post on hybrid etymology I referred to purists who complain about words like jeopardize based on a misconception that any living language could be pure and that mixing them somehow taints them. At Macmillan Dictionary Blog I advised people to ignore language cranks whose beliefs are eccentric, fervently held, and cantankerously expressed.

I use stickler quite often, because the people I refer to are dogmatic and pedantic. Pedant is also common, but one can be correct and helpful in one’s pedantry, whereas the peevers are frequently misinformed about the nature and purposes of language and the facts of its use. So I sometimes modify pedant or its derivatives to clarify.

In Oliver Kamm’s book Accidence Will Happen: The Non-Pedantic Guide to English Usage, he describes the title of his UK Times column The Pedant as an ironic joke (‘in the same spirit as Slate magazine runs a column about economics called “dismal science”‘), and he addresses the problem of terminology I’ve been discussing:

As a shorthand term I’ve called them purists but theirs is not a pure form of English. No such thing exists. . . . My preferred term for these purists is sticklers or pedants, and collectively the sticklocracy.

Much as I tend to side with Kamm’s arguments, I find sticklocracy a bit awkward, and unlikely to enter general currency for that reason and on account of its novelty. Also, while its suffix connotes the aspirational or power-based motives of some sticklers, equally there are many whose sticklerism is just indulgence in trivial, petty triumphalism.

In a similar vein, John E. McIntyre has coined peeververein, which he defines as: ‘The collective group of self-appointed language experts whose complaints about errors in grammar and usage are generally unfounded or trivial’ (from peever + verein, German for ‘association’ or ‘club’). The reduplicative core of this compound (-verver-) has led haplologically to Barrie England’s inadvertent blend peeverein.

Peever by itself I find useful; I’ve even tagged a bunch of blog posts peevology. I’ve also on occasion gone with nitpicker, fusspot, grammar grouch, authoritarian, grammaticaster, ideologue, language police, and others, some of which are relatable to language only in context. I don’t normally use prescriptivist this way without qualifying it, since its scope is too broad – as an editor I wear a prescriptive hat.

Motion to globally replace "grammar nazi" with "language change denier." All in favor?

James Callan’s suggestion of language change denier has found some support, and it points pleasingly at the anti-evidence stance of those who idealise a static language or the form of it they inherited. But at six syllables the phrase is a bit long, and it is applicable only in certain cases.

Anne Curzan at Lingua Franca recently advocated for the portmanteau word grammando, which, though superficially satisfying, is too positive-sounding to my ears. Jan Freeman feels the same way:

@johnemcintyre I like the look of "grammando," but connotations seem too positive/neutral to describe the typical peever, no?

@Jan__Freeman @johnemcintyre I think so too. The blend has aesthetic appeal but risks romanticizing unpleasant, anti-social behaviour.

(Clicking through either of those tweets will show some brief follow-up discussion.)

Related portmanteaus, such as grammilitia, have failed to gain any real currency. Into this gap the Nazi meme spreads, with Grammar Gestapo, Spelling Stasi and similar monikers batted about. A grammar Nazi Twitter account uses an avatar imitative of the Third Reich flag, and a search on Google Images shows a range of related iconography that suggests lots of people find this sort of thing funny or attractive.

The cultural mashup of language criticism and Nazism may be meant ‘humorously’, but it leaves an unpleasant taste. We already have actual-Nazi grammar Nazis: why blur the line further? By using Nazi to refer to common pedantry and preoccupation with correctness, we diminish its historical substance to something altogether facile. If ever there was a word that didn’t warrant amelioration, it’s Nazi.

I don’t think any single alternative, old or new, will suit all cases or satisfy most users. Not every stickler is a crank; not every pedant is a purist: the degree of variation points to diverse positions, preferences, and needs. I expect I’ll keep picking from the set outlined above and others that occur to me, but I’d be interested to hear what you favour, and why.

I should mention one scenario where I’ve used Grammar Nazi: in a pop culture/linguistics game. I’d add scare quotes if it didn’t spoil the joke. 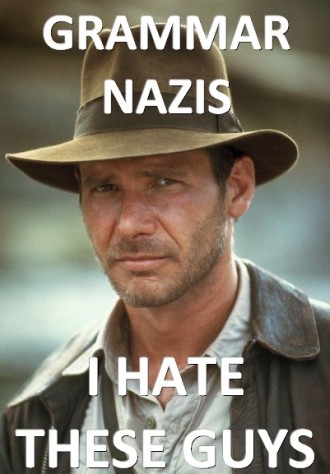 And because my brother told me he has students who’ve never heard of Elvis or the Beatles, I won’t take any chances: This is the scene to which my ‘Indo-European Jones’ image alludes:

Update: At the Baltimore Sun, John E. McIntyre offers his thoughts on the phrase:

If you are not Mel Brooks, making jokes about Nazism is in questionable taste. . . . Proclaiming oneself to be a “grammar Nazi,” however light-heartedly, serves mainly to confirm the stereotype that people who take grammar seriously are humorless authoritarians quick to condemn others over trivialities. The grammar Nazi, like the flogging schoolmaster and the knuckle-rapping nun, is a cliche ripe for retirement.

This entry was posted on Tuesday, December 1st, 2015 at 12:29 pm and is filed under grammar, language, phrases, semantics, usage. You can follow any responses to this entry through the RSS 2.0 feed. You can leave a response, or trackback from your own site.

74 Responses to What should we call ‘Grammar Nazis’?