Catch of the day: ‘Sea Gastronomy’ by Michael O’Meara

A few years ago I edited a master’s thesis for Michael O’Meara, a Galway-based chef and photographer. Michael owns Oscars Seafood Bistro, which he runs with his wife Sinéad and a talented team. His thesis won an award for academic excellence, and he was pleased enough with my editing and proofreading that he sent me a testimonial and said he’d be in touch again when he wrote a book.

Michael was true to his word. After much research and compilation of material he put together a manuscript, and with the tireless help of the wonderful Connemara publishers Artisan House the results of these efforts are now complete. Sea Gastronomy: Fish & Shellfish of the North Atlantic is a prodigious achievement, with 440 pages of recipes, zoological notes, and more, covering 120-odd species (some of them very odd) from the bountiful seas around Ireland. 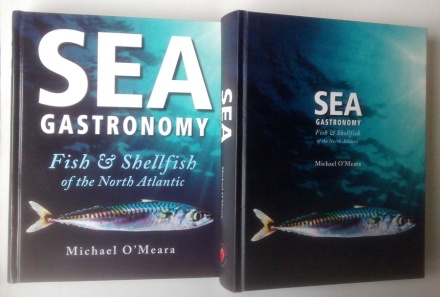 Sea Gastronomy is a thoroughly impressive work that shows a deep awareness of the importance of sustainable fishing. Its encyclopaedic quality is strengthened by consultation with marine biologists and other experts, and Michael’s skills in the restaurant are complemented by his talents as a photographer: most of the book’s 380 colour photos are his own, taken as opportunity arose offshore and in the kitchen over several years.

Ireland is a small island and its people are enthusiastic cooks and diners, but we’re often strangely cautious about seafood, shying away from unfamiliar names and over-relying on frozen supermarket fare. Sea Gastronomy tackles this deficit head-on by including guides to buying, storing, and preparing all sorts of fish and seafood, along with insider tips to engage beginners and professionals alike. I love cooking but I’m just a dabbler, and I learned a lot from the book – and not just about food but about areas like taxonomy and marine ecology.

I may be biased because I copy-edited it, but I’m in good company in considering Sea Gastronomy something special. Sunday Times restaurant critic Ernie Whalley, who wrote the book’s foreword, calls it ‘a masterpiece’ and ‘a work of considerable scholarship’. McKenna’s Guides says it is ‘a landmark in Irish food publishing’ that ‘performs the vital task of demystifying the very thing that should be the backbone of our national cuisine’.

Georgina Campbell’s glowing review describes Sea Gastronomy as a ‘stunning and very timely book’ whose ‘deep respect for marine resources . . . will make it an invaluable resource for schools and colleges as well as home cooks’. She says it is ‘a game changer in the way we understand, value and cook with the treasures of the ocean’.

Michael Viney in the Irish Times finds the book beautifully produced and illustrated, and ‘an excellent plain cook’s guide to how to tackle a whole fish or crab as it comes from the sea rather than anonymous supermarket fillets’. O’Meara, he writes, ‘shows personal feeling for the sea and conservation of marine life’, attending to species ‘too often discarded’. The Irish Examiner says it is a ‘trove of knowledge’ whose educational element:

covers purchasing, storing, preparation and cooking of 120 species of fish and shellfish with an authority and lucidity that demands it instantly become the standard seafood textbook for any culinary education institute in the land.

The accompanying original recipes for each species are thoughtful and inventive yet never lose sight of the pure simplicity that is the essence of any successful fish dish. All in all, a towering achievement and if an Irish cook was compelled to choose a single seafood cookbook, any mulling over the choice has now been rendered utterly redundant.

While the focus of Sea Gastronomy is Ireland, I’m sure it will appeal to cooking enthusiasts elsewhere too. It would make a beautiful gift for Christmas, or indeed a treat for oneself at any time of year. At €30 it is a steal, and there’s a limited edition for €100 (on the right in the photo above) with an original photographic print by Michael O’Meara.

You can order it online from Artisan House, Book Depository, Amazon, or your preferred bookshop. If you’re in or around Galway you’ll find it in Oscars restaurant, Mary’s Fish, Cases Wine Warehouse, and in bookshops like Dubray’s, Eason’s, and of course Charlie Byrne’s: 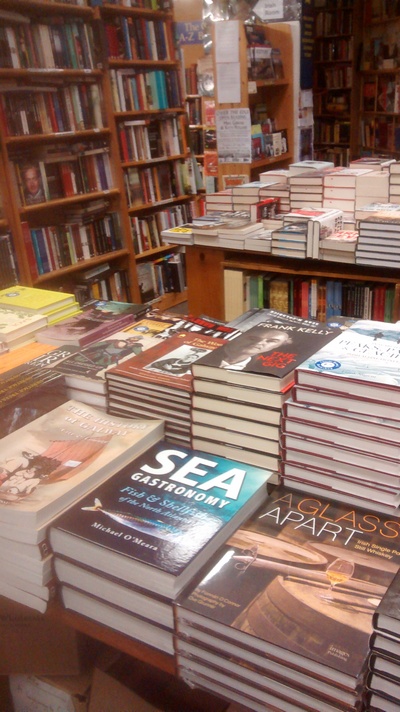 I’ll finish with a photo I took en route to the launch of Sea Gastronomy in Letterfrack, Connemara, home to Mary Ruddy and Vincent Murphy of Artisan House. I kept stopping the car to get out and take photos. This enchanting view is on the approach to the Inagh Valley: 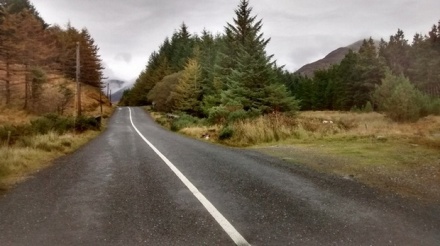 Sea Gastronomy has been named Cookbook of the Year in the annual awards by John and Sally McKennas’ Guides.

Marie Claire Digby in the Irish Times selects Sea Gastronomy in her 10 best cookbooks of the year, and says it’s ‘probably the only book you’ll ever need on fish cookery’.

The prestigious Gourmand Awards have shortlisted Sea Gastronomy for both its Cookbook of the Year award (the only book in Ireland the UK to attain this) and its Fish and Seafood Books award.

It won! The 21st Gourmand World Cookbook Awards have named Sea Gastronomy the best seafood cookbook in the world 2016.

This entry was posted on Monday, December 7th, 2015 at 1:25 pm and is filed under books, editing, food, Ireland, personal, photography. You can follow any responses to this entry through the RSS 2.0 feed. You can leave a response, or trackback from your own site.

2 Responses to Catch of the day: ‘Sea Gastronomy’ by Michael O’Meara