Sarcastic punctuation in The X-Files

English has no standard punctuation mark or typographic style to show sarcasm or verbal irony. This lack has inspired a whole menagerie of proposals over the centuries, including backwards question marks, upside-down or zigzag exclamation marks, and left-slanting typefaces (‘ironics’, ‘Sartalics’). Some have gained niche usage, while others faded more or less instantly: only the winking smiley ;-) ;) has become widespread, and only in informal text.

I notice the gap sometimes when chatting online, for example when I misinterpret someone’s tone or they misinterpret mine. A tongue-in-cheek statement can easily be taken at face value if the reader doesn’t know the writer well. This happens often on Twitter, where strangers’ statements can spread without much pragmatic context.

The idea of a dedicated irony mark doesn’t really appeal to me – I tend to favour deadpan delivery over excessive obviousness, despite the greater potential for misunderstanding. Even offline I’m regularly taken seriously when I shouldn’t be. If I think it’s important to make a joking or ironic tone explicit in text, there’s always :-) ;-) and their noseless varieties.

The very nature of irony means that efforts to standardise its representation may be misconceived. Keith Houston, whose book Shady Characters supplies a fascinating history of irony- and sarcasm-marks, writes: ‘If the quality of irony in a statement is such that it must be telegraphed to the reader, is it still ironic?’ Writing about sarcasm on the internet, Gretchen McCulloch concludes similarly:

In context, sarcastic typography is part of a larger ecosystem of ways to convey emotional nuance and textual tone of voice – and it’s anything but random. Compared with all these subtle distinctions, a single sarcasm punctuation mark is too blunt an instrument: it defeats the entire saying-without-saying part of sarcasm that makes it engaging in the first place. Using a a percontation point or a SarcMark™ is like explaining why a joke is funny – if you have to bother, you’ve just ruined it anyway.

And so to The X-Files, which I’ve been rewatching in fits and starts. In the pointedly comic episode ‘War of the Coprophages’ there’s an exchange near the end that features a noteworthy example of ironic/sarcastic punctuation in the DVD subtitles. Mild spoilers follow.

The episode is about a cockroach infestation and includes several wrong turns and misdirections for the FBI agents Mulder and Scully. After a chaotic climax, questions remain unresolved. The key players – our investigating heroes, and guest stars Drs Ivanov and Berenbaum – are reflecting on what exactly happened.

Dr Bambi Berenbaum, played by Bobbie Phillips, has a name and demeanour that seem to trigger Scully’s eyebrow-raising impulse from the start. Berenbaum’s romantic/sexual tension with Mulder – if it can even be called that, since only Mulder is clearly interested – may also play a role here. The subtitles abridge the dialogue slightly, so I’ve added a full transcript of the exchange below.

Dr Berenbaum speculates, in a rather earnest style, on recent events: 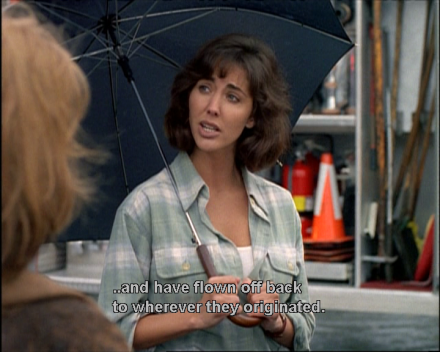 Scully is thoroughly unimpressed by this unsatisfactory thesis, and offers Mulder a withering aside, sotto voce. (I’ve included the second image below to clarify the second speaker’s identity as Dr Ivanov.) 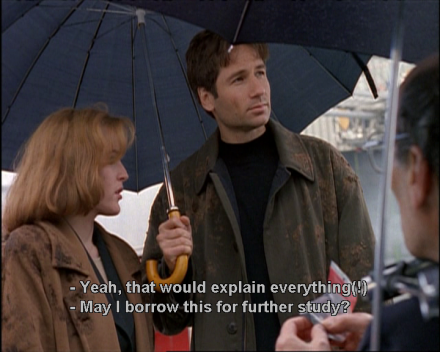 Berenbaum: You know, many insects don’t develop wings until their last moulting stage. Perhaps whatever these things were, they had their final moult and have flown off back to wherever they originated.

Scully: Yeah, that would explain everything(!)

Ivanov: May I borrow this, Agent Mulder, for further study?

Notice the punctuation ending Scully’s remark. An unparenthesised exclamation mark wouldn’t have worked, because Scully’s utterance was quiet and its ironic inflection was underplayed. If she had spoken the line as an obvious joke and directed it to the group instead of just to Mulder, a straight ! would have been appropriate. But she didn’t.

Equally, a full stop was deemed insufficient to convey her attitude of mild scorn for Berenbaum’s hypothesis (and maybe also for Berenbaum herself). Most viewers would infer Scully’s sarcastic intent regardless, but the (!) serves to confirm and underline the overtones. An ellipsis may have achieved a similar effect, but the parenthetical bang is an interesting typographical choice.

I went through a phase of occasionally using (!), mainly in letters and then emails to friends, to mark an item of potential amusement. But it felt like a hedge, and the habit didn’t stick. It doesn’t appear to be searchable in Gmail, so I can’t find a concrete example of my own use of it to compare with Scully’s.

This entry was posted on Monday, December 21st, 2015 at 4:17 pm and is filed under humour, language, pragmatics, punctuation. You can follow any responses to this entry through the RSS 2.0 feed. You can leave a response, or trackback from your own site.

14 Responses to Sarcastic punctuation in The X-Files