The Hot News or After Perfect in Irish English

A characteristic feature of English grammar in Ireland is the so-called after perfect, also known as the hot news perfect or the immediate perfective. Popular throughout Ireland yet unfamiliar to most users of English elsewhere, it’s an idiosyncratic structure that emerged by calquing Irish grammar onto English. It has also undergone some curious changes over time.

The after perfect normally expresses perfect tense, using after to indicate that something occurred in the recent or immediate past, relative to the time of speaking or reference. It uses a form of the verb be, followed by after, then usually a verb in the progressive tense. BE + AFTER + [VERB]ING. I’m after meeting them means I met them a short time ago.

So I’m after summarising the after perfect. Now for some detail.

Past tense be-forms work too, so the after perfect can correspond to the past perfect (aka pluperfect). Instead of We had just arrived, an Irish person may say We were just after arriving. Just, only, and only just are often added to stress recency: We’re just after eating means we finished eating just moments ago. Be after can also license a noun phrase: Let her rest – she’s only after a swim. Or: I’ve no room for dessert yet – I’m just after dinner.

Robert Burchfield’s Modern English Usage, rare for a usage guide, has an entry on the construction, describing it as ‘unknown’ outside what he calls Anglo-Irish. P.W. Joyce, in English As We Speak It In Ireland, writes that neither present nor past tense form ‘would be understood by an Englishman, although they are universal in Ireland, even among the higher and educated classes’. Note, though, that modern sources label it informal.

I said that it comes from Irish: on this point linguists are agreed. This is because the language has no direct equivalent of have. Translating I have just done it into Irish involves be and one of several phrases meaning after, e.g.: Tá mé tar éis é a dhéanamh, or Tá mé i ndiaidh é a dhéanamh, both of which literally mean I am after doing it. (The underlined phrases mean after, as do iar and a haithle.)

Here are a few examples of the after perfect I’ve come across in Irish literature:

‘I’m after being in at the mart and the price of sheep is a holy scandal.’ (Claire Keegan, ‘Men and Women’, in Antarctica)

If we were after having some wet weather the earth would be damp and clammy, clinging to boots, knees and hands. (Alice Taylor, To School Through the Fields)

It’s after upsetting him more than anything ever upset him before in all our lives. (Donal Ryan, The Thing About December)

I shuddered when the shadow fell over me. Hickey laughed, his breath a white plume on the chilly air. ‘Is someone after walking across your grave?’ (Claire Kilroy, The Devil I Know)

‘When you get a bit of heat at all like the heat we’re after getting today,’ he said, ‘the man below do be swimmin’ in his own melt.’ (Kevin Barry, ‘White Hitachi’, in Dark Lies the Island) 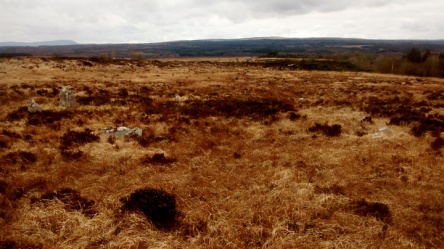 A small stone circle (c.1200 BC) I’m after seeing near Woodford in south Galway. Not pictured: two skittish deer that bounded away without delay.

About those changes I mentioned. In contemporary Irish English, the after perfect nearly always refers to recent events (or recent relative to the point of reference). But centuries ago it commonly referred to the future, e.g. ‘[my heart] will be after breaking outright’ for ‘will break’. Even Irish people who use the idiom routinely may not know this; none that I asked did.

The switch from future to past reference occurred over the 18th and 19th centuries, following patterns in Irish, resulting in what Ailbhe Ó Corráin calls a ‘profound functional shift’ in his detailed historical discussion ‘On the “After Perfect” in Irish and Hiberno-English’ (PDF). He describes a wide range of types and uses of the after perfect, and shows how:

Jeffrey Kallen, in his paper ‘The English language in Ireland’ (PDF), has helpful insights into the after perfect’s extended uses and pragmatic functions in modern Hiberno-English:

Speech act status and social closeness have a role to play in uses of the after perfect, since after perfects frequently occur in situations where the speaker draws attention to an event that is known to the listener but which forms the focus of chastisement, e.g. You’re after breakin the gate!. O’Keeffe and Amador Moreno (2009) similarly emphasise the function of ‘scolding’, including ‘self-inflicted or self-deprecating’ utterances with the after perfect.

He argues that the ‘chastising and self-critical’ uses of the after perfect in Hiberno-English ‘would not have the same pragmatic effect if rendered with the regular English have perfect’.

As with other Hiberno-English features, such as amn’t and haitch, the after perfect is subject to occasional censure. Years ago, on her Irish Times arts blog, Fiona McCann wrote: ‘Hilary Mantel’s Wolf Hall is after winning the Booker prize’. A reader, Mimi, queried the idiom, Fiona explained it, but Mimi was unimpressed: ‘As I thought then, grammatically incorrect! . . . sounds a bit “Irish” to me’. Wrote the Irish Times reader.

Lest there be any uncertainty: the after perfect is grammatically impeccable, though not standard English. Every dialect has its own grammar, none more correct or advanced than any other. Standard English is one such dialect, socially privileged but not linguistically superior. People are often confused on this point, and may use grammar as a pretext for expressing suspicion or dislike of a group of people.

But I’m after getting sidetracked.

You may have noticed the potential for ambiguity. The peculiarly Hiberno-English use of after can produce phrases that are legitimate in standard English but carry a different meaning: where after conveys the idea of wanting or seeking something. Reader Adrian Morgan reports an example he overheard in Australia, while T.P. Dolan’s Dictionary of Hiberno-English quotes one from George Birmingham’s The Lighter Side of Irish Life (1912):

An Englishman who had settled in Ireland once related to me a conversation which he had with an Irish servant. ‘Mary,’ he said, ‘will you please light the fire in my study?’ ‘I’m just after lighting it,’ she replied. ‘Then do it at once,’ he said. ‘Don’t I tell you, sir,’ she said, ‘that I’m just after doing it?’

Nor is it just anecdotal. Shane Walshe’s Irish English as Represented in Film cites a study by Harris (1982) in which groups of native HibE speakers and native BrE speakers were asked the meaning of the line I’m after getting a cup of tea. 143 out of 145 of the Irish English group understood it to mean the person had just got a cup of tea; 51 of 63 BrE speakers understood it as an expression of desire for a cuppa.

Speaking of which, I’m after making a fresh pot. Is anyone after a cup, in either sense?

Here’s an interesting example of confusion over this. A horse-racing report on the Guardian sports blog included a quote from Irish jockey Rachael Blackmore:

“I just can’t believe I’m [talking] after winning the Grand National,” she said.

This entry was posted on Monday, March 14th, 2016 at 9:08 pm and is filed under dialect, grammar, Hiberno-English, Ireland, language, phrases, words. You can follow any responses to this entry through the RSS 2.0 feed. You can leave a response, or trackback from your own site.