Despite all the solid, readily available information on the passive voice, there remains a great deal of misinformation and confusion about it. This confusion, far from being limited to non-specialists, pervades professional circles too – journalists, for example, but also journalism professors and authors of writing manuals.

A case in point is Essential English: For Journalists, Editors and Writers by Sir Harold Evans. First published as Newsman’s English in 1972, book one of a five-volume manual of newspaper writing and design, it was fully revised by Crawford Gillan and published by Pimlico in 2000, also incorporating book three, News Headlines (1974).

Essential English first wades into the passive-voice swamp in Chapter 2, in a section titled ‘Be Active’:

‘Police arrested Jones’ – that is a sentence in the active voice. The subject (police) is the actor: the receiver of the action (Jones) is the object. We say the verb (arrested) is being used transitively because it requires an object; the verb is said to be used intransitively when it does not need an object. Look what happens to that perfectly good sentence in the active voice with a transitive verb when we write the sentence in the passive voice – when the receiver of the action becomes the subject rather than the object: ‘Jones was arrested by police’. We now have five words where three told the story before.

Well then, how about Jones was arrested? That’s three words, it keeps the main subject to the fore, and it reduces redundancy: Who else but the police would have arrested him? Whether Police arrested Jones or Jones was arrested is better depends on the surrounding text. There are arguments against the passive voice, in certain contexts, but those presented here are invalidated by a bad example. Not an auspicious start.

The next chapter looks at sources of wordiness. It compares ‘shorter and more direct’ phrasing (Sandy Smith hurt his leg; Lawrence Jones was killed) with what it calls ‘passive reporting’ (Sandy Smith suffered a leg injury; Lawrence Jones was fatally injured). Whatever about the styles’ respective merits, they can’t be distinguished by grammatical voice: Both Smith clauses are active; both Jones clauses are passive. Talk of ‘passive reporting’ is confused and misleading. 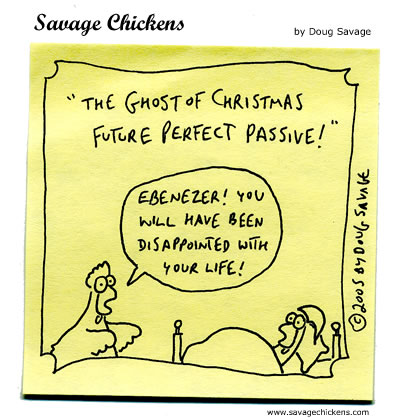 Chapter 6 of Essential English has useful analysis of news story structure. But again, when it touches on active versus passive voice, it goes astray. Dissecting an example of a ‘good news narrative’ (a report on Kosovo refugees by Barry Bearak in the NYT, 1999), it praises a passage that begins thus:

This morning, the hoxha did the ritual cleaning of the bodies. The girls’ bloody clothes were replaced by the white sheets.

In a sidebar opposite these lines, we are advised: ‘Note the quality of observation. Concrete nouns, active voice verbs.’ But of the two verb constructions quoted, did and were replaced, one is active and one is passive. One out of two ain’t good. The next few verbs in the report are active, but the damage is done – the impression is of authors and editors, writing about writing, unable to identify the passive voice at the same time that they complain about it.

Essential English focuses on headlines in its last two chapters, giving lots of good advice. Unfortunately, it returns to the topic of active and passive voice and gets it fundamentally wrong again:

Above all, prefer the active voice to the passive. In other words, write headlines with somebody saying something or doing something, rather than having it told to them or done to them. ‘Boy falls into well’ is what people say and what text editors should write as a headline, rather than this published but unnatural back-to-front headline:

Fall into well injures boy (Arizona Republic, 10 December 1957, p. 1) may well be back to front, story-wise, but it’s not passive – it’s active. Fall into well is the subject, and injures is the verb. There’s nothing passive about it. You can’t demonise the passive voice with an example in the active voice. It just makes nonsense of an already simplistic argument.

The headline in the passive voice could be: Boy injured by fall into well. This may not be elegant, but it retains Evans’s preferred front-to-back order, and it includes an important detail (the injury) which is missing from Boy falls into well. And I don’t know about you, but I would never say ‘Boy falls into well’ in ordinary discourse. It’s not ‘what people say’.

The book goes on to note that use of the active voice ‘can lead to a more vivid construction’ in a headline, because by reducing the word count it frees up extra space. That’s true, though it shouldn’t be taken as creed – occasionally passive is still appropriate. But the example used to illustrate the point is poor:

US DEMANDS RELEASE OF SEIZED SHIP

RELEASE OF SEIZED SHIP DEMANDED BY US

The second headline is indeed passive – at last! – but it seems to be a contrived case. US demands release of seized ship is a real, historical headline, but I found no evidence of the passive formulation, so I’m guessing Evans converted it to make his point. This is unsatisfactory and unconvincing, since I can’t imagine many sub-editors approving it.

Given the book’s theme and the experience of those involved in its publication, you’d think someone would have noticed the problem it has in identifying the passive voice – whatever about the bias in how it’s characterised. You would hope the author, editor, proofreader or fact-checker would have addressed it. For a book offering expert guidance on English prose, it’s utterly inept on this point.

Inept, but not unusual:

Yet another journalist confused about the passive voice. "Controversy has arisen" is active https://t.co/yQZy7hNUM1 pic.twitter.com/6Ygm4EDmD8

Confusion about the passive voice, number eleventy megazillion. There is no 'passive tense'. https://t.co/ARncnrPOro

These are just a few examples I came across fortuitously. If I went looking, I’d find a lot more. Language Log has catalogued many other cases over the years.

Essential English has a stellar reputation, as shown by its back-cover blurbs. Across the political spectrum, it’s lauded by editing luminaries as a ‘bible’, ‘the standard and brilliant text on written English for journalism’, and so on. In many ways it is a helpful manual. But I wonder how influential its grammatical ignorance has been. If this is a bible for journos, it’s no wonder they’re confused about passives.

[My earlier post ‘Fear and loathing of the passive voice’ has a great set of videos that explain what the passive voice is, what it isn’t, and why so many people use it as a scapegoat for various types of writing they don’t like. If you’re not 100% sure of the terrain, I recommend it. NB: I edited this post after publication to structure it better.]

This entry was posted on Friday, May 13th, 2016 at 12:26 pm and is filed under editing, grammar, journalism, language, syntax, usage, writing. You can follow any responses to this entry through the RSS 2.0 feed. You can leave a response, or trackback from your own site.