Borrow was a walker of awesome stamina and a linguist of almost inconceivable talent, who is said to have been able to speak twelve languages by the time he was eighteen and to have been competently acquainted with more than forty – including Nahuatl, Tibetan, Armenian and Malo-Russian – over the course of his life. In the winter of 1832–3 the British and Foreign Bible Society invited him at short notice to an interview in London, wanting to see if he could translate the Bible into a number of difficult languages. He walked to the interview from Norwich, covering 112 miles in 27 hours, sustained by a pint of ale, half a pint of milk, a bread roll and two apples. The society liked what they saw and commissioned Borrow to translate the New Testament into Manchu. What Borrow hadn’t told them was that he did not have any Manchu. No problem. Once the job was landed, he acquired ‘several books in the Manchu-Tartar dialect’, and Amyot’s Manchu–French (French!) dictionary. Then he travelled home (by coach, understandably) and shut himself up with the books. Three weeks later he could ‘translate Manchu with no great difficulty’, and fulfilled the society’s commission.

I love the dietary detail, though I wonder how successful the commissioned translation was. The Old Ways has two ‘Water’ chapters wherein Macfarlane journeys by boat off Scotland with his friend Ian Stephen, a poet and storyteller and also an experienced sailor:

Ian called the long waves ‘whalebacks’. He was a connoisseur of waves, and I was starting to learn his vernacular for different kinds of water. A ‘stramash’ was the boiling effect where currents met and mixed. Where they clashed there was a ‘clutter’. Small waves ‘swithered’. Extremely disturbed water was either ‘bouncy’ or ‘jabbly’. ‘Long ones’ were the big, fast, purposeful waves, smooth in profile but intent in action, that ‘scratched their backs’ on the keels of boats. ‘Big bastard long ones’ were problem causers: they offered what he called ‘rough greeting’, breaking over the stern or bow of low-beamed vessels. To me, the surface of the sea was the fluid equivalent of white noise or Classical Chinese. To Ian it was legible as a children’s book.

Macfarlane’s most recent book, Landmarks, focuses on the language of landscape, showcasing the tremendous richness of dialectal vocabulary for natural phenomena. I haven’t read it yet, but I will. (I did feature a related article in a link love post last year, plus others on Twitter.) 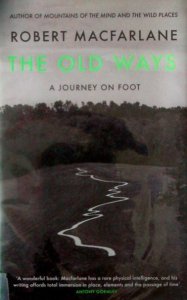 Later in The Old Ways Macfarlane visits the sacred mountain of Minya Konka in Tibet and ponders a Spanish palindrome:

I felt excited to be walking these paths, which so many pilgrims had followed over centuries, drawn to this great and sacred mountain and others like it. Running through my brain, falling into a rhythm to which I set my pace, was a Spanish palindrome on the subject of pilgrimage: ‘La ruta nos aportó otro paso natural’ – ‘The path provides the natural next step’. Its chiasmic form cleverly acknowledged the transformative consequences of the foot-pilgrimage, which returns the traveller to his origin and turns the mind back upon itself, leaving the pilgrim both ostensibly unchanged and profoundly redirected.

(Pity about that generic his.) Macfarlane returns his attention to the Tibetan landscape, but not before drawing a parallel to something Edward Thomas wrote. Thomas’s works, life and spirit infuse The Old Ways, and towards its conclusion Macfarlane reflects on the writer’s emergence as a poet:

Landscape and nature are not simply there to be gazed at; no, they press hard upon and into our bodies and mind, complexly affect our moods, our sensibilities. They riddle us in two ways – both perplexing and perforating us. Thomas knows this to be true because he has felt it on foot, with his feet, and [Eleanor] Farjeon again, keenly, senses this: ‘he walked with himself, with his eyes and his ears and his nostrils, and his long legs and his big hands.’

The challenge, of course, is how to record such experience – apprehended, but by definition unsayable – in language, using the ‘muddy untruthful reflection of words’. Poetry is the form of utterance that can come closest; this he knows as a reader. But he has never written poetry, and has little reason to think he can.

As the First World War loomed on the near horizon, Thomas befriended Robert Frost, who was living in Gloucestershire at the time. The two would walk together for many miles, a joint habit Frost called ‘talks-walking’. He recognised Thomas’s latent poetic ability:

It is Frost who encourages Thomas to make the move from prose into poetry. He is, Frost tells him, a poet behind the disguise of prose. It’s Frost who takes lines from one of Thomas’s travelogues and rearranges them as verse, so that Thomas can see what he’s been doing all along without knowing it. Frost ‘produced . . . the enharmonic change,’ Farjeon writes beautifully, ‘that made [Thomas] not a different man, but the same man in another key.’ Thus retuned, and with such encouragement, his poems start coming – tentatively, experimentally – his first finished on 3 December 1914.

Several months later Frost sends Thomas a draft of ‘The Road Not Taken’, which Macfarlane says was ‘inspired, obliquely, by the memory of walking with Thomas in the Dymock fields’. Thomas’s ‘wish to walk every path’ was a seed for Frost’s famous rumination on the impossibility of this wish.

Thomas, alas, took it personally, as a ‘parody of his indecisiveness over the question of the war’. It was a ‘drastic misreading’, Macfarlane writes, and one with terrible consequences. In an endnote he acknowledges a discussion by Matthew Hollis in Now All Roads Lead to France for illuminating the poem’s tragic effect on Thomas’s life.

The Old Ways finishes with a motley nine-page glossary offering such delights as:

bleb: A bubble of air in water, glass, ice or other substance that is, or was, fluid.

eolith: The name given to the earliest worked stones.

hodology: The study of roads and pathways (the word is absent from the OED, but usages can be found in Frank Morley’s The Great North Road, with a speculative reference, on his part, back to D’Arcy Wentworth Thompson, thence to Goethe, thence to Aristotle).

register: The placing of the hind foot into the track made by the forefoot (of, for example, a deer, cat or fox). In a ‘clean’ register two tracks appear as one.

thwart: A seat across a boat.

As you’ve probably gathered, I enjoyed the book a lot and would recommend it. (I liked The Wild Places even more.)

This entry was posted on Thursday, June 16th, 2016 at 1:15 pm and is filed under books, dialect, language, nature, poetry, words. You can follow any responses to this entry through the RSS 2.0 feed. You can leave a response, or trackback from your own site.

11 Responses to The Old Ways and the old words