Strong Language: The return of the ***king

It’s over a year since I blogged about Strong Language. Time to recap.

For the uninitiated, Strong Language is a group blog about swearing – the linguistics and culture of taboo language – set up by James Harbeck and me in 2014. It boasts a great team of writers comprising linguists, lexicographers, historians, editors, and other word adepts.

There are swears in this post, so bail out now if they bother you.

So far I’ve published 29 posts on the blog – some of them guest posts I’ve edited, including one last week by Michael Adams on Donald Trump’s swearing. Our busiest day yet was 1 August last year: over 30,000 people read my post ‘Mapping the United Swears of America’ after it was featured in the Washington Post and other outlets.

James and I were recently interviewed about Strong Language, and about swearing, on WordPress’s Discover blog, where the comments – like those on our sweary blog – show a general appreciation for and fascination with profanity.

Strong Language is not for everyone, but if you share our interest in taboo vocabulary and such things, take a look. You can also follow @stronglang on Twitter for more regular items of a profane nature. 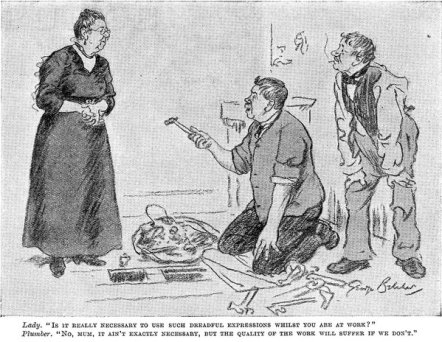 Lady: “Is is really necessary to use such dreadful expressions whilst you are at work?”

Plumber: “No, mum, it ain’t exactly necessary, but the quality of the work will suffer if we don’t.”

This entry was posted on Tuesday, July 26th, 2016 at 10:08 pm and is filed under language, linguistics, slang, speech, words, writing. You can follow any responses to this entry through the RSS 2.0 feed. You can leave a response, or trackback from your own site.

2 Responses to Strong Language: The return of the ***king