Pelecanos: the words, the rhythms, the slang

I’m slowly catching up on the back catalogue of George Pelecanos, who has written about 20 crime fiction novels (and also wrote for The Wire). Recently I read Hell to Pay (2002), which contains several items of linguistic or metalinguistic interest.

The book is one of a handful by Pelecanos that centre on private detectives Derek Strange and Terry Quinn, the first black, the second white, the two ex-cops.

Terry Quinn goes looking for information from sex workers. He bums a cigarette as a way into conversation, but being a non-smoker he has nothing to light it with. Then he encounters Stella, a ‘pale’ girl ‘maybe knocking on the door of seventeen’:

She sat down without invitation. He handed her the cigarette.

‘You need a new rap,’ she said, rooting through her shoulder bag for a match. Finding a book, she struck a flame and put fire to the cigarette. ‘The one you got is lame.’

‘You be hittin’ those girls up for a smoke, you don’t ask ’em for a light, you don’t even have a match your own self?’

Quinn took in the girl’s words, the rhythms, the dropping of the g’s, the slang. Like that of most white girls selling it on the street, her speech was an affectation, a strange in-and-out blend of Southern cracker and city black girl.

Meanwhile, Derek Strange meets Eve, who stopped street-walking when she got too old for her pimp, who goes by the remarkable name Worldwide. Their exchange produces a novel verb:

‘You just walked away from trickin’, huh?’

‘Worldwide specializes in these young girls. It wasn’t like I went off to another pimp. That’s something he wouldn’t let happen, understand what I’m sayin’? What it was, he couldn’t use me no more. I got old, Strange. So I clean-breaked and came on over here.’

Clean-breaked is presumably formed from the noun phrase clean break. The usual, roundabout way of expressing this as a verb is make a clean break – break clean is not used this way – but instead Eve economically turns clean break itself into a verb: clean-breaked. Note that she clean-breaks from the head’s usual ablaut form broke.

Strange teaches American football to a group of boys. At training one evening one boy, Joe Wilder, makes a skilful touchdown and jogs back with a spring in his step:

‘I be doin’ that on FedEx Field someday, Coach Derek.’

‘It’s I will be doing that,’ said Strange, who then smiled, thinking, I believe you will. 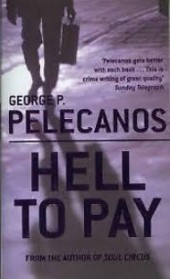 I be doin’ that is an example of habitual be, a feature of Black English (aka African American [Vernacular] English) that I discussed in reference to another Pelecanos book, King Suckerman. In correcting Joe’s dialect to standard English, Strange preserves the habitual aspect: he doesn’t say ‘It’s I will do that.’

Strange keeps up the community-mentor role at his girlfriend’s house, where he tries to lay down some ground rules for her teenage son, Lionel, who protests.

‘I wasn’t even thinkin’ about smokin’ that stuff tonight, you want the truth. This girl I’m seein’, she’s special to me, understand, and I wouldn’t do nothin’, anything, that I thought would get her in any kind of trouble with the law.’

What I like here is the way Lionel expresses negation. The switch of register from non-standard grammar (wouldn’t do nothin’) to standard (wouldn’t do anything), including reinstatement of the word-final g, underscores his resolve – his use of anything is meant not as self-correction but as emphasis.

That g crops up again later when Strange and Quinn are waiting to speak with a man in a department store who, though he is shining a customer’s shoes, also owns the business and several other outlets:

Strange and Quinn waited in an alcove-type area beside the stand. They could hear the white man talking to the shoe-shine man about the Redskins/Ravens game, praising only the black players. They could hear the white man ending his sentences with ‘man’ and they could hear him dropping his g’s, talking in a way that he thought would endear him to the black man kneeling at his feet. Talking in a way he would never talk at work and in a way he would forbid his children from talking at the dinner table at home. Strange looked over at Quinn, and Quinn looked away.

The customer in the store is perhaps overdoing what linguists call accommodation. David Crystal defines it as follows, in his Dictionary of Linguistics and Phonetics:

A theory in sociolinguistics which aims to explain why people modify their style of speaking to become more like or less like that of their addressee(s). For example, among the reasons why people converge towards the speech pattern of their listener are the desires to identify more closely with the listener, to win social approval, or simply to increase the communicative efficiency of the interaction.

Spelling features in a few other minor ways in Hell to Pay. When I first saw McDonald’s written as MacDonald’s, I wondered if it was a typo. But Pelecanos uses the variant deliberately. Carlton Little, a small-time criminal, ‘loved to eat anything you could take out of somebody’s hand from a drive-through window. Taco Bell, Popeyes, and the king of it all, MacDonald’s.’ (Italics in the original.)

The text in this part of the book is from Little and his tribe’s point of view, and the narration takes on the particular flavours and quirks of their speech. The addition of a vowel and italics for Mac indicate that they stress this syllable. A little later, the same spelling (with the same partial italicisation) recurs in a line from one of Little’s friends:

Little’s friend may be teasing him through imitation, or this could be how they all say it; probably the latter. The regular spelling McDonald’s occurs twice in running prose in the next paragraph.

Another word I noticed is Pelecanos’s use of y’all in the possessive case: ‘I thought I’d let the weekend pass, didn’t want to disturb your-all’s beauty sleeps.’ I’m not saying it’s rare, but I don’t see it very often. There’s also plenty of y’alls and an all a y’all.

Finally, aiight is used in dialogue throughout. This is a non-standard spelling of all right, which a few dictionaries (including Oxford and Collins) list under aight with one i. The duplicated i-form that Pelecanos uses, aiight, may indicate personal preference or a more gangster style than aight, or it may be an attempt to convey a long diphthong, lest anyone mispronounce it like eight.

This entry was posted on Thursday, July 28th, 2016 at 12:50 pm and is filed under books, dialect, grammar, language, slang, speech, usage, words, writing. You can follow any responses to this entry through the RSS 2.0 feed. You can leave a response, or trackback from your own site.

9 Responses to Pelecanos: the words, the rhythms, the slang