Rise of the Invincibles – and the ‘dribbling game’

Having grown up on the football comic Roy of the Rovers and similar strips, I was excited to hear that a friend of mine was writing his own – a comic book history of the early days of the English football league and the famous FA Cup.

Michael Barrett’s Preston North End: The Rise of the Invincibles was published this month, and I had the pleasure of doing some editing work on it. The book’s focus is on Preston North End FC, the first team to win the league and cup ‘double’, but the background is rich in period details of late-19C England: social reform, the cotton mills that inspired Dickens, and home and street life:

The artist is David Sque, best known for illustrating some of the original Roy of the Rovers strips, so the style and tone will have nostalgic appeal for readers of that generation. Rise of the Invincibles captures the excitement on and off the pitch as the new sport of football (‘the dribblin’ game’) develops and turns professional and its early stars become local legends.

The book also has elements of linguistic interest, not least the Lancashire dialect used here and there throughout. It’s quite prominent on this page: 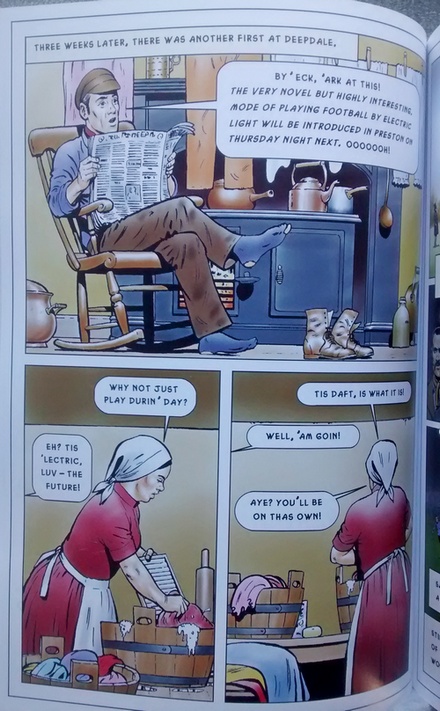 Michael told me that some of the Lancashire (‘Lanky’) usages depicted, such as thas, are really only used in jest nowadays. But it was important to him to make the dialogue authentic for its time and place without overdoing it to the point of obscurity.

Some of the language in the book has deliberate comic value, for instance a notorious remark the Prince of Wales made while watching Preston NE play a charity match as part of Queen Victoria’s jubilee festivities:

I say! That man kicked the ball with his head!

Because Ireland has its own, Gaelic form of football, we often use soccer to refer to what British people call football. America does similarly.

The etymology of football is obvious enough; soccer comes from Association football, just as the lesser-used rugger comes from Rugby football. Language Hat has more on the terminology.

Preston North End: The Rise of the Invincibles would make a great gift for sports fans and history lovers. In many ways it is, as the expression goes, real Roy of the Rovers stuff. You can find out more about it on Michael Barrett’s Invincible Books website.

This entry was posted on Monday, November 28th, 2016 at 4:17 pm and is filed under books, dialect, personal, words. You can follow any responses to this entry through the RSS 2.0 feed. You can leave a response, or trackback from your own site.

11 Responses to Rise of the Invincibles – and the ‘dribbling game’