Bosch checked the rearview. He wanted to ask a question but didn’t want to hold people up.

‘Uh, to say you’re done doing something, is that wrong? You know, bad English?’

Sue tried to hide a smile.

‘If she’s correcting you, that’s the natural course of things. Don’t take it personally. We drill it into them here. They go home and want to drill somebody else. It would be proper to say you finished doing something. But I know what you meant.’

Bosch nodded. Somebody in the line behind him tapped the horn – Bosch assumed it was a man hurrying to make drop-off and then get to work. He waved his thanks to Sue and pulled out.

Bambrough doesn’t call the usage ‘wrong’ or, despite Bosch’s prompt, ‘bad English’, instead stressing the primacy of communication. For her it’s a question of ‘proper’ English – itself a loaded idea, but less invidious. She’s a bit behind, though. Even prescriptive authorities, such as Wilson (1993) and Garner (2016), say done ‘finished’ has been around for centuries and is standard English. 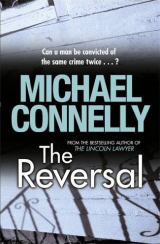 I also wonder if the non-linguistic references to manners, in the form of driving etiquette, are an intentional parallel. I’d like to think so, even if Connelly’s style is generally to spell things out more explicitly.

The done/finished issue recurs a couple more times in the novel. At home one evening, Madeline upbraids Bosch again:

He slid the computer back to his daughter. And checked his watch again.

‘Are you almost done your work?’

‘Finished, Dad. Are you almost finished? Or you could say “done with.”’

‘Sorry. Are you almost finished?’

‘I have one more math problem.’

‘So let’s not complicate things. Let’s keep our circles separate and go to trial and get this guy for killing Melissa Landy. And when we’re done that, we go up to Mulholland with shovels.’

‘When we’re done with that.’

Though the whole sequence in The Reversal is a bit belaboured, credit to Connelly for showing the mundane mechanics of the contagion of grammar-peeving. It’s often the ones you love and trust.

For more on the linguistics of Michael Connelly books, see my posts on his spelling kind’ve, and, at Strong Language, one on profane ambiguity.

Update: The Yale Grammatical Diversity Project (which bookended a links roundup here in 2011) has a page on ‘done my homework‘, with examples like I am done dinner and you’re done the tattoo:

The done my homework construction is a widespread characteristic of Canadian English, and it is also found in the United States among speakers in Philadelphia, Vermont, and New Hampshire […]. It has not been found in the dialects of the United Kingdom or elsewhere outside of North America.

There’s also brief discussion of the usage by Grammar Girl, and more at Language Hat.

This entry was posted on Wednesday, February 22nd, 2017 at 10:34 am and is filed under books, dialect, grammar, language, speech, syntax, usage, writing. You can follow any responses to this entry through the RSS 2.0 feed. You can leave a response, or trackback from your own site.