Two of my favourite books on writing have the same one-word title: Style. Years ago I shared an essay by the author of the older Style, Frank Laurence Lucas, and having recently revisited his book, I’ll post a few excerpts.

First published in 1955, Lucas’s Style has dated in certain respects (try to ignore the generic male pronouns), but it is still full of sound advice and insights on the art and mechanics of composition. So then: What is style? Lucas describes it as:

a means by which a human being gains contact with others; it is personality clothed in words, character embodied in speech. If handwriting reveals character, style reveals it still more – unless it is so colourless and lifeless as not really to be a style at all. The fundamental thing, therefore, is not technique, useful though that may be; if a writer’s personality repels, it will not avail him to eschew split infinitives, to master the difference between ‘that’ and ‘which’, to have Fowler’s Modern English Usage by heart. Soul is more than syntax. If your readers dislike you, they will dislike what you say.

Three chapters are titled ‘Courtesy to Readers’. The first, on clarity, concludes with a note on how to achieve it:

How is clarity to be acquired? Mainly by taking trouble; and by writing to serve people rather than to impress them. Most obscurity, I suspect, comes not so much from incompetence as from ambition – the ambition to be admired for depth of sense, or pomp of sound, or wealth of ornament. It is for the writer to think and rethink his ideas till they are clear; to put them in a clear order; to prefer (other things equal, and subject to the law of variety) short words, sentences, and paragraphs to long; not to try to say too many things at once; to eschew irrelevances; and, above all, to put himself with imaginative sympathy in his reader’s place. … In short, it is usually the pretentious and the egotistic who are obscure. 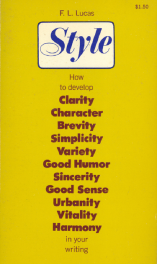 I like how Lucas uses parallel structure to arrange, in clear fashion, a 67-word sentence even as he warns against writing long sentences. The next chapter, on brevity, has some wonderful lines (‘The terrible brevity of life would demand more brevity of language’) and a fine observation on long books:

A good writer is one who knows also what not to write. Too many books (like some of Wells’s novels) are large simply from lack of patience – it would have taken too long to make them short.

But this effort should not be overdone:

Brevity, like clarity, has its limitations. It is not considerate to the reader to present him continuously with matter so tersely and tensely compressed that his attention can never relax, because if he loses a word he is lost. This becomes truer still with oratory. Ben Jonson says in praise of Bacon that ‘His hearers could not cough, or look aside from him, without loss.’ Very fine. But hearers do cough, and look aside. They also misunderstand, or forget. It is not good to feed horses on nothing but oats, or human beings on nothing but verbal tabloids. There remains sometimes a certain need of bulk. …

If a style is too tense, and the reader too concentrated, he may never be able to relax – to dream; the less conscious levels of his mind may be too much suppressed; and he may begin, perhaps without knowing it, to long for a vaguer, softer atmosphere, as a traveller among the sharp outlines of Greece grows homesick for the mistier contours and more brooding distances of northern lands.

Sixty-nine words in that one. And if you were struck by the strong metaphors – horses eating oats, homesick wanderers in Greek landscapes – you’ll be interested to know that Lucas devotes a whole chapter to metaphor and simile. It concludes:

Those who have no gift for metaphor and imagery are doubtless wise to keep clear of it; but … those who have it, whether in writing or in speech, will find few qualities that better repay cultivation.

Style by F. L. Lucas is deservedly back in print, and will enrich any writer’s, editor’s, or reader’s shelf – from which place it may even end up in a poem. For further excerpts, see this Twitter thread.

"I do not know which is more striking – the clumsy inadequacy of words, or their world-shaking power." —F.L. Lucas, Style

This entry was posted on Wednesday, July 19th, 2017 at 8:24 pm and is filed under books, language, literature, metaphor, writing. You can follow any responses to this entry through the RSS 2.0 feed. You can leave a response, or trackback from your own site.

11 Responses to F.L. Lucas on style: ‘personality clothed in words’