Our hero, Avice, is an ‘immerser’ (a traveller in outer space) who has returned to her home, Embassytown, an outpost of Bremen, on the planet Arieka. The native Ariekei, more politely ‘Hosts’, speak a language (known as Language) with peculiar qualities. For one thing, speech somehow is thought: the Hosts are literal-minded in ways that make no theoretical sense but propel the plot and fire the imagination.

Avice meets her future husband, Scile, a linguist, at a conference that’s a veritable xenolingoganza, where we hear about, among other strangeness, a population that communicates via regurgitation: ‘Pellets embedded with enzymes in different combinations are sentences, which their interlocutors eat.’ Embassytown itself has multiple languages, including an English-derived dialect called Anglo-Ubiq.

When cosmonauts from Bremen encounter a sentient species, they use a method called Accelerated Contact Linguistics (ACL) – ‘a specialty crossbred from pedagogics, receptivity, programming and cryptography’ – to communicate with aliens as rapidly as possible:

In the logs of those early journeys, the excitement of the ACLers is moving. On continents, on worlds vivid and drab, they record first moments of understanding with menageries of exots. Tactile languages, bioluminescent words, all varieties of sounds that organisms can make. Dialects comprehensible only as palimpsests of references to everything already said, or in which adjectives are rude and verb unholy. I’ve seen the trid diary of an ACLer barricaded in his cabin, whose vessel has been boarded by what we didn’t then know as Corscans – it was first contact. He’s afraid, as he should be, of the huge things battering at his door, but he’s recording his excitement at having just understood the tonal structures of their speech.

When the ACLers arrived on Arieka, they quickly got down to work at understanding the Hosts’ language. It turned out to be polyvocal, with two voices intertwined: ‘Two sounds – they can’t speak either voice singly – inextricable by the chance coevolution of a vocalising ingestion mouth and what was once probably a specialised organ of alarm.’

The ACLers systematically mapped Language, soon grasping its syntax despite the usual ‘share of astonishments’ in an alien language. The Hosts were patient with, even intrigued by, these efforts, though they showed no interest in learning Anglo-Ubiq. Eventually the linguists were able to reproduce the sound of Language synthetically. But when their machines mimicked, precisely, the native greetings,

The Hosts listened, and did not understand a single sound.

It turns out that Language, to be understood, needs a mind behind it. Because the machines were not sentient, what they produced was not Language; the Hosts heard only ‘empty barks’. Enter Ambassadors: cloned humans who, through bio-engineering and neurological entraining, share enough sentience to speak Language. 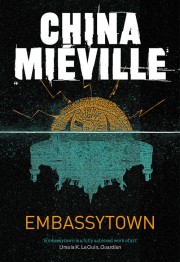 In Language, speech is thought, so the very notion of lying is nonsensical to Hosts – but not for the Ambassadors, who ‘could lie as well in Language as in our own language, to Hosts’ unending delight.’ This delight is ritualised in a Festival of Lies, where Ambassadors say self-evidently false things in Language, thrilling the Hosts with semiotic scrambling and paradoxical potential.

Some humans become living similes in Language. The Hosts ask people to perform an action, and they can then refer to those people in Language to express an idea or extend their understanding – to help them think. ‘Everything in Language is a truth claim. So they need the similes to compare things to, to make true things that aren’t there yet, that they need to say.’

Avice, as a child, did the Hosts this service and became for them ‘the girl who ate what was given her’.

In the main my simile was used to describe a kind of making do. Spanish Dancer and its friends, though, by some odd rhetoric, by emphasis on a certain syllable, spoke me rather to imply potential change. That was the kind of panache that could get Hosts ecstatic. I had no idea whether many of them had always been so fascinated by language, or whether that obsession resulted from their interactions with the Ambassadors, and with us strange Languageless things.

This impossible Language baffles Avice’s husband: ‘Words don’t signify: they are their referents. How can they be sentient and not have symbolic language? How do their numbers work? It makes no sense.’ It’s not meant to. Allowing Miéville this trick of impossibility, or underspecificity, means the alien Language remains truly alien, exciting in sketched form – typographical and orthographical tricks are used to render it – but retaining the uncanny feel of something beyond our ability to make cohere in our own minds.

I mentioned lexical creativity, and there’s no shortage of it here (I previously examined the use of henchperson in Miéville’s novel Kraken). Embassytown offers novel verbings (basilisking, similed), neologisms (floaking, bansheetech, immernaut, auntfather, shivabomb), and rare plurals (autos-da-fé of heretic technology). The book supplies so many peripheral pleasures that I can’t do them justice here.

But I will mention Ehrsul, an advanced humanoid AI, as the excerpt below shows how deft is Miéville’s treatment of some of the sci-fi tropes it’s steeped in. Though Ehrsul can change her physical incarnation, ‘she only ever used one corpus, according to some Terrephile sense of politesse or accommodation.’

She’d been in Embassytown for longer than the lifespan of anyone I knew. Her turingware was way beyond local capabilities, and more than the equal of any I’d seen in the out. Spending time with most automa is like accompanying someone brutally cognitively damaged, but Ehrsul was a friend. ‘Come save me from the village idiots,’ she sometimes said to me after downloading updates alongside other automa.

‘Do you joke to yourself when no one’s watching?’ I had asked her once.

‘Does it matter?’ she had said at last, and I felt scolded. It had been rude and adolescent to raise the question of her personality, her apparent consciousness, of whether it was for my benefit. It was a tradition that none of the few automs whose behaviour was human enough to prompt the question would answer it.

Even so inconspicuous a phrase as that bigram at last in Ehrsul’s reply suggests possibilities a reader can rummage around in without ever, as the book progresses, forming a definite conclusion or needing to. And so it is with the bigger ideas in Embassytown, a linguistic thought experiment artfully embedded in a superior bit of weird world-building.

This entry was posted on Tuesday, August 29th, 2017 at 10:20 am and is filed under books, language, linguistics, literature, writing. You can follow any responses to this entry through the RSS 2.0 feed. You can leave a response, or trackback from your own site.

12 Responses to Linguistic sci-fi in Embassytown