The prescriptivism is coming from inside the house

Still playing catch-up on Michael Connelly’s books, I recently read his novel The Drop, which features his usual protagonist, LA-based police detective Harry Bosch. Bosch is at home watching a security tape (well, a DVD), on his teenage daughter’s laptop. She asks him what it’s about. Bosch says to her:

‘This guy checking in, he goes up to his room on the seventh floor last night and this morning he’s found on the sidewalk below. I have to figure out if he jumped or if he got dropped.’

She stopped the playback.

‘Tennessee Williams. I read. A palooka is an old fighter who’s like a lout. You don’t want to be like that.’

It’s not the first time Madeline has corrected her father. In ‘Harry Bosch, trainee prescriptivist’ I reported how (in Connelly’s The Reversal) she upbraided him for using nonstandard grammar: a dialect usage of the form I’m done my work. Me, I’d rather be a palooka than a peever, but Madeline is young; she’ll come round yet.

Connelly’s books are usually well edited, but The Drop has a few questionable items worth a look – not to find fault, but out of editorial and readerly interest. First:

They were known in the unit as ‘the kids’. They were young, passionate and very skillful investigators, but between them they had fewer than eight years’ experience working homicides.

This raises the thorny issue of less and fewer, which I’ll address in detail another time. Suffice it to say that unless the investigators’ years of experience should be counted in indivisible chunks of one year – which is contextually possible but seems unlikely – then less is appropriate and fewer is hypercorrect.

A little later we see what appears to be a straightforward redundancy overlooked in proofreading:

But since Maddie had come to live with him, it was increasingly more difficult for him to look at victims. 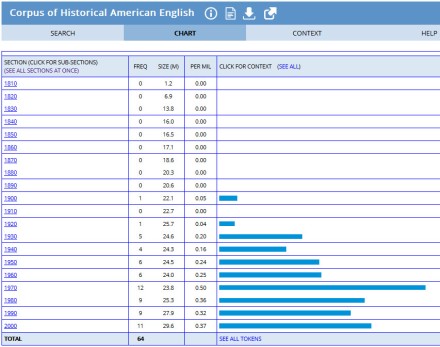 But I’ll be resisting it. Then there’s this funky en dash:

My guess is that it was originally (and correctly) crescent moon–shaped bruises, with the closed-up en dash doing the work of compound hyphenation, and that someone unfamiliar with this function or who misread the line added spaces around the dash, obscuring the sense a bit.

Finally there is an interesting ambiguity of number:

Hardy put the glass down next to the ashtray. He reached a hand up to where the breast pocket of a shirt would have been but he had no pocket on the smock he was wearing. It was a subconscious move to a pack of cigarettes that weren’t there. Bosch remembered doing that himself when he was addicted.

I would change this to a pack of cigarettes that wasn’t there. To my ear, that sounds better. I’m not sure that notional agreement applies sufficiently to be a good option here.

A pack of cigarettes that weren’t there could be a proximity error, aka false attraction, or it could be a stylistic preference – albeit one I don’t share. I’d be interested to know if you see it differently.

This entry was posted on Saturday, September 30th, 2017 at 11:47 am and is filed under books, editing, grammar, language, punctuation, usage, writing. You can follow any responses to this entry through the RSS 2.0 feed. You can leave a response, or trackback from your own site.

21 Responses to The prescriptivism is coming from inside the house