Most entries are not defined – it’s a style guide, not a dictionary, so the focus is on usage. But just browsing the guide helps readers educate themselves on an esoteric but useful lexicon. It’s especially helpful for professional writers and editors, sorting out capitalisation, hyphenation, and similar conundrums. (There’s also straight-up grammar advice, like ‘Use singular they’.)

Linguist and editor Brianne Hughes, who previously featured on Sentence first for the morphological wonders she calls cutthroat compounds, created the Cybersecurity Style Guide with help from her colleagues and introduces it on the company blog:

Our goal here is to give guidance about usage, not to define the terms in detail. Each term in the guide earned its place by being unintuitive in some way:

• It may be a homonym of a non-technical word (front door, Julia, pickling),

• it may be uniquely written (BeEF, LaTeX, RESTful),

• it may have a very specific technical distinction (invalidated vs. unvalidated),

• or its meaning may differ depending on the audience and the day (crypto, insecure, PoC). 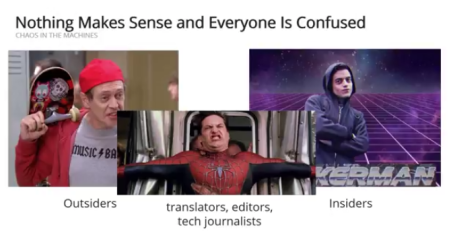 The editors invite feedback, so a few suggestions follow. Pwn is ‘pronounced “pown”,’ we’re told, but that could rhyme with town or tone. (It’s the latter.) I would add an entry for CamelCase, given its prevalence in the jargon. The entry for doge says ‘Such disputed pronunciation’, but standard grammar is generally avoided in doge: ‘Many disputed pronounce’ would be more apt.

Bishop Fox’s Cybersecurity Style Guide is an excellent and welcome addition to the editing literature and is likely to become increasingly useful as time goes on. You can download the PDF directly here. For a witty, entertaining explanation of the need for the guide, watch Brianne Hughes’s presentation at CactusCon last year (NB: audio quality is poor; audience reactions are louder than the speaker):

Update: Brianne Hughes talked to the Chicago Manual of Style about the Cybersecurity Style Guide.

* DOS = Disk Operating System; DoS = denial of service. The verb does; the noun doesn’t. ‘Precede with “a,” assuming that the reader pronounces it as “sequel.” Sometimes pronounced as letters.’ ‘Ask-ee’. An automated password-guessing attack.

This entry was posted on Friday, March 2nd, 2018 at 5:03 pm and is filed under books, editing, jargon, journalism, language, spelling, usage. You can follow any responses to this entry through the RSS 2.0 feed. You can leave a response, or trackback from your own site.

One Response to Cybersecurity Style Guide is a useful editing tool