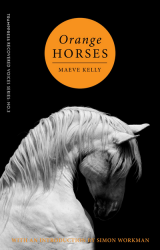 Joe’s ‘I might’, incidentally, shows a linguistic tendency characteristic of Irish people. The Irish language has no words for yes and no, instead generally affirming or negating by repeating the verb used by the other speaker; this grammatical pattern is often carried over into Irish English: ‘Will you have another cup?’ ‘I will.’

The use of herself (‘Herself and Joe met…’) at the start of the passage is another feature of the dialect, one I’ll explore properly another time.

Later, Martha is working inside when Joe returns, and we learn more about their mismatched tendencies and how the couple accommodated these in their marriage:

‘Any post?’ she asked him when he came back half an hour later.

‘Any news at the creamery?’

It was almost a ritual. She clutched at the few sentences he let fall without prompting, and would sometimes go over them afterwards, savouring each preposition, each monosyllabic word. Once when she had the temerity to reproach him for not talking to her more often, he said she’d have something to grumble about if he was out every night in the local with the boys, or running after some flighty woman who wanted to be run after. She had to agree that it surely would be something to grumble about, but it wasn’t a fair comparison. He was a just man, so he said, ‘I’ve got a lot on my mind,’ and went away before she could retaliate. She wanted to scream after him, ‘I’ve got a lot on my mind, too, but I need to share it. If I don’t share it with you it might be with one of your friends who holds my hand too long when saying goodbye, or squeezes me when we’re dancing at the hunt ball.’ It wouldn’t do any good, of course. And she didn’t want to start screaming. She calculated that one scream led to another, and she might end up screaming at herself.

In another story this tension might be the fulcrum, but for Maeve Kelly here it’s background texture. The real drama lies in circumstance, in sudden events on the farm, which I won’t reveal. But these too reflect the couple’s divergent natures. In the aftermath, with ‘silence in every corner’, Martha talks to herself:

Her monologues were successful therapy. In the past, she had talked herself out of gloom, neurosis, over-confidence, inhibition. She could intone her predicament to the sink, word for word, until it hung there quivering under her accusing eye, and finally disintegrated with the bubbles in the dish water. Joe’s healing process was slower and perhaps more painful because he was not able to articulate his despair. Their fathers would have said, ‘God’s holy will be done,’ and slipped the problem easily on to divine shoulders. Such faith and such relief were not a part of their lives.

Another story in Orange Horses, ‘The Fortress’, depicts a similar difference except that this time the woman is the quiet one and her husband is the chatterbox:*

Her words were sparse, each one expressing its precise meaning, whereas he used words with lush extravagance, rolling them off his tongue, relishing the embroidery they added to his thought. She envied him his verbosity sometimes, because she felt traitorously that if she had such words within her control she would make better use of them.

Orange Horses, published by Tramp Press as part of its Recovered Voices series, is one of the strongest story collections I’ve ever read. Tramp’s Lisa Coen describes its multitude of voices as ‘a complex and brilliant weaving of a secret history of Irish women from an author capable of profound empathy and scathing imagination’.

The striking cover design is by Fiachra McCarthy.

"A late marriage was like a late autumn, full of the knowledge of recent summer and coming winter." —Maeve Kelly, Orange Horses

* The stereotype of women talking much more than men gave the name to an excellent mythbusting linguistics book I reviewed in 2016.

This entry was posted on Thursday, May 31st, 2018 at 6:33 pm and is filed under books, dialect, Hiberno-English, language, literature, pragmatics, speech, writing. You can follow any responses to this entry through the RSS 2.0 feed. You can leave a response, or trackback from your own site.

4 Responses to Savouring each preposition