Deborah Tannen’s book You’re Wearing THAT? Understanding Mothers and Daughters in Conversation (Virago Press, 2006) has no shortage of passages worth quoting. Here are two.

The title’s foregrounding of clothes, by the way, is indicative but potentially misleading: clothing is but one of many topics whose metamessages Tannen analyses.

A chapter on inclusion and exclusion in female relationships notes the early emergence of this preoccupation:

Much of the talk that little girls exchange with their friends is telling secrets. Knowing each other’s secrets is what makes them best friends. The content of the secret is less significant than the fact that it is shared: Exchanging secrets is a way to negotiate alliances. A girl can’t tell secrets in front of girls who aren’t friends, because only friends should hear her secrets. So when girls don’t like another girl, they stop talking to her, freeze her out of the group. That’s why when a little girl gets angry at a playmate, she often lashes out, “You can’t come to my birthday party.” This is a dreadful threat, because the rejected girl is left isolated. In contrast, boys typically allow boys they don’t like, or boys with low status, to play with them, though they treat them badly. So boys and men don’t tend to share (or understand) girls’ and women’s sensitivity to any sign of being excluded. (They tend to develop a different sensitivity: to any sign of being put down or pushed around.)

In other words, the coin of the realm in girls’ friendships is inclusion and exclusion, the first a precious (if tenuous) gift, the second a fierce punishment. This explains why much of the satisfaction in mother–daughter conversation comes from feeling included, and much of the dismay results from feeling left out. 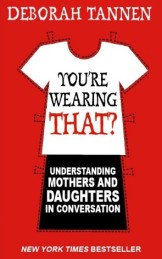 Have you experienced the social trade in secrets?

A later chapter looks at how digital communication, particularly email and instant messaging, can affect relationships in various ways, including the fostering of private language:

Even now, when e-mail is ubiquitous, it can still function as a very personal domain in which correspondents reinforce closeness by using a private language. For example, one mother and daughter who communicate frequently by e-mail are both deaf and use as their primary language ASL—American Sign Language. Like many others, they cherish keeping in touch this way, but for them e-mail has a special dimension. Because ASL words are formed by hand shapes, they cannot be written as English words can. So when this mother and daughter write e-mail messages to each other, they use written English words in place of ASL signed words, but they slot them into ASL sentences. Since word order is different in ASL than in English, the result is a blend of the two languages. In addition to being more efficient than writing to each other in English, using this private language reinforces their feeling of closeness and of the uniqueness of their rapport.

Any two people can devise a private language, and many who are close do. (This is one of the reasons it is painful when a romantic relationship ends: you’re left with a repertoire of words and expressions that you can’t use anymore because no one else understands them.)

I don’t use a sign language, so it was interesting to learn how one might be blended with written English because of technological necessity. I can relate to the more general observations on private language – its creation (and loss) in romantic relationships, and also its continual expression in families, maybe especially among siblings.

Deborah Tannen has featured on Sentence first before, in book spine poems and in two short posts on gender differences in conversation.

This entry was posted on Tuesday, July 28th, 2020 at 3:32 pm and is filed under books, gender, language, language and gender, linguistics. You can follow any responses to this entry through the RSS 2.0 feed. You can leave a response, or trackback from your own site.

6 Responses to Secrets and private languages