Book review: A Place for Everything: The Curious History of Alphabetical Order, by Judith Flanders

Alphabetical order is all around us, to various degrees of prominence. Yet it is less straightforward than is often supposed: my efforts to catalogue my books and DVDs, not to mention the bibliographies that I proofread, point to myriad complications. Alphabetical order is not the uniform ideal it may superficially seem to be.

It also often shares space with other kinds of order, such as genre, or personal cosmology. A traditional phone book does not quite go from A to Z – businesses are listed separately. Many of them, moreover, game the system, bypassing its seeming neutrality. (Nicola Barker’s novel Darkmans – itself the size of a phone book – has a character enraged by a competitor whose company name pips him in the listings.)

Still, alphabetical order is far more neutral than other systems. Historically, power played an outsized role in the arrangement of listable items; for centuries that power reflected prevailing religious norms. In early medieval Christendom, works often strove to reflect the hierarchy of God’s creation, and so alphabetical order ‘looked like resistance, even rebellion […] or possibly ignorance’.

This comment comes from a new book, A Place for Everything: The Curious History of Alphabetical Order by Judith Flanders. It tells the story of ‘how we moved from the arrival of the alphabet around 2000 BCE to the slow unfolding of alphabetical order as a sorting tool some three thousand years later’. It is a welcome exploration of an area that has received relatively little attention compared to the alphabet itself:

Ordering and sorting, and then returning to the material sorted via reference tools, have become so integral to the Western mindset that their significance is both almost incalculable and curiously invisible.

We take alphabetical order for granted now, but its emergence was fraught with uncertainty and complexity, not all of which has been ironed out. Initially it was applied only to a word’s first letter. Not until centuries later was it extended beyond that, and here, too, different styles were applied: Konrad of Mure arranged the headwords in his 1273 encyclopedia Fabularius alphabetically up the second syllable – and then by the number of syllables. 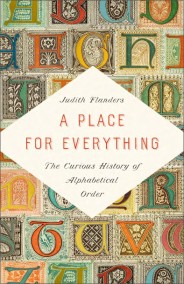 Each innovator had to solve order for themself, and commonly had to explain their system to readers presumed to be unfamiliar with it. Teasing out the early development of alphabetical order requires much reading between the lines, since original texts (and other artefacts of writing) often have not survived, or survive only as copies, which were routinely reordered per later conventions.

The gradual shift from subject categories to alphabetical order, with its greater abstraction, was ‘more than a move from an unwieldy to a more convenient system (our perception, of course, not theirs)’, Flanders writes. ‘It required an altered perspective’:

To modern eyes, deus means God; it is also a Latin word, and it is in addition made up of four letters, d-e-u-s, which are a linguistic construct, created by humans, that hold no inherent meaning or value. To Isidore of Seville, however, the word deus, even spelled out on a page in his Etymologies, was indissoluble with the abstract idea the word represented. It took a shift in perception for medieval thinkers before locating d-e-u-s under D, rather than at the head of the text, caused no profound sense of transgression.

A Place for Everything delves into the cultural changes that motivated the increasing use of alphabetical order, such as the explosion in documentation of all types that came with rising populations – human memory has its limits – and the availability of paper as a cheap alternative to parchment. The increasing bulk and complexity of law and bookkeeping intensified the need for organizational efficiency.

The world was growing more organized, more bureaucratized, more reliant on paper, not merely physically, but mentally too. And with that new systematization came new ways to map the paper world, new ways to locate individual elements as and when needed. Customs, and even laws, incorporated these changes, and then came to rely on them.

Libraries play a major role, and their evolving styles of inventory and catalogue are brought vividly to life. We learn how great figures of science and the humanities liked to sort their vast notes: Erasmus, Pepys, Goethe, Leibniz (a librarian for much of his life who created ‘the first fully alphabetical [library] catalog in the German-speaking lands’). Robert Boyle tried myriad techniques: colour-coding, numerals, mnemonic verses, lettered boxes – but not, oddly, alphabetical order.

When encyclopedias began dropping the old hierarchies, some people feared ‘the atomization of knowledge that alphabetization might herald’. Coleridge, for one, was disturbed by the randomness of the Encyclopaedia Britannica, to him now a ‘huge unconnected miscellany’. Flanders identifies a ‘fault line’ in intellectual circles, with the older system ‘designed by, and for, the learned’ being superseded by one that was more quickly and easily accessible by the general public.

There are fascinating excursions into the unfolding of related devices for organizing text, such as glosses, indexing, marginalia, cross-referencing, and page numbering. These are skilfully intertwined with condensed accounts of such topics as the origins of printing and the vogues for specialized furniture (e.g., the Wooton desk) and office accessories like the newsroom spindle or spike.

Alphabetical order reaches only so far, of course. Some writing systems do not use an alphabet, and even in the heavily alphabetized West, there are analphabetical holdouts such as Roget’s Thesaurus, whose internal logic intrigued me intensely as a child. The relentless spread of digitalization, meanwhile, produces systems that can be alphabetized with a click – or searched just as easily, bypassing the alphabet.

The prevalence of alphabetical order has begotten a strange invisibility, making A Place For Everything an enlightening and richly enjoyable read. While exploring how alphabetical order rose to near-ubiquity in the West, it also offers a broad and entertaining history of adjacent tools and ideas. You can order it from publisher Basic Books (who, full disclosure, sent me a copy) or from your local bookshop.

This entry was posted on Tuesday, November 10th, 2020 at 2:28 pm and is filed under book reviews, books, language history, writing. You can follow any responses to this entry through the RSS 2.0 feed. You can leave a response, or trackback from your own site.

12 Responses to Book review: A Place for Everything: The Curious History of Alphabetical Order, by Judith Flanders