Links, links, dozens of links! About language, linguistics, literature, and wordy stuff. Most are for reading, some (🎙) for listening.

How we read emoji.

The language of the hand.

‘Saying the quiet part out loud’.

Toward a theory of the New Weird.

The many 👉 functions of pointing 👈.

The changing politics of the Russian language.

Bat singing, babbling, and other vocalizations (🎙).

The origins of punching up and punching down (🎙).

OED100: Updating and expanding the OED.

Fictional gestures in sci-fi and fantasy.

The spread of subtitles on TikTok.

On reading from the ancients.

The language of cybersecurity.

The violent origins of well-heeled.

On the element of surprise in writing.

The effects of storytelling on children in hospital.

What is the subject of a sentence? (Don’t ask Google.)

The politics of the Asturian language in Spain.

Inside the Oxford English Dictionary.

The United Fonts of America.

You can, and you may.

Fun with speech balloons by Bizarro: 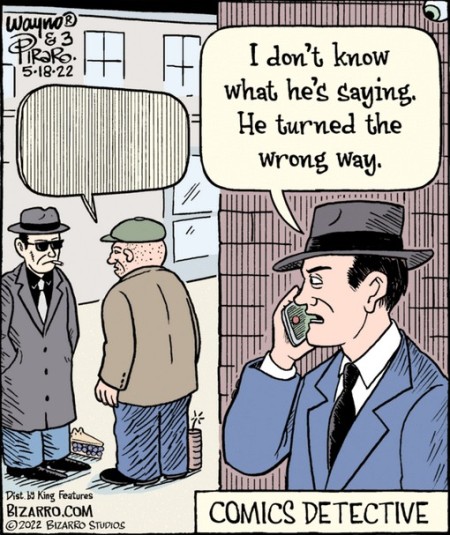 * Not a word I use often, but I included it in a recent essay, ‘How well read should editors be?’

This entry was posted on Tuesday, July 26th, 2022 at 1:54 pm and is filed under language, linguistics, link love. You can follow any responses to this entry through the RSS 2.0 feed. You can leave a response, or trackback from your own site.