‘Because X’ in Finnish and Norwegian, because borrowing

Languages often borrow from one another: it’s a common source of linguistic growth and change. Normally what gets borrowed is words, called ‘loans’, ‘loanwords’, or ‘borrowings’ (though the terms suggest eventual return, which isn’t how it works). Any word that isn’t a loanword is a native word.

English is a frequent borrower, being full of loanwords from many other languages. This ability to integrate foreign forms is one reason for its success. And it goes both ways: because of English’s status and reach, it’s a common ‘donor language’ for others. The World Loanword Database is a useful resource on the phenomenon.

Less often, other linguistic elements are borrowed, like grammatical structures or pronunciations. An example of the former is because X, a popular construction in informal English.* I first wrote about because X in 2013, elsewhere picking it as my word of the year (the American Dialect Society later did likewise). Such was its impact that the phrase was discussed not just by linguists but by more mainstream outlets.

END_OF_DOCUMENT_TOKEN_TO_BE_REPLACED

I was struck by this use of incredulous in an old trailer for the 1932 Universal Studios film The Mummy, starring Boris Karloff: 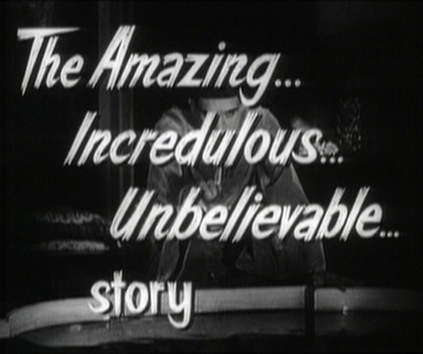 My first reaction was that it should be incredible – since incredulous means ‘unbelieving’ or ‘disbelieving’, not ‘unbelievable’ – but it seemed unlikely that such a ‘mistake’ would have slipped through unnoticed. So I looked it up.

END_OF_DOCUMENT_TOKEN_TO_BE_REPLACED

“I remember when this was all feels”

It’s a few months since I launched the Sentence first shop, and also since I mentioned it, so a brief plug before Christmas won’t go amiss. I’ve updated the contents a little, removing some items and adding a new product line or two – most recently one with the text:

I remember when this was all feels

Obviously it’s a play on the well-worn line I remember when this was all fields (or: when all this; all just fields, etc). 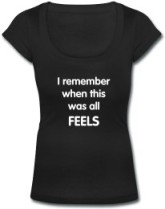 The feels in question are an internet meme of sorts. The pun might mean nothing to you, or you might find it appealingly silly. You might even have seasonal feels about it.

Spreadshirt advises ordering by 13–14 December to avail of standard delivery in the US by Christmas. (Outside the US, it may be too late even for Santa.) Requests and feedback are welcome – you can leave a comment below, send an email, or find me on Twitter at @StanCarey.

For other Christmas gift ideas, you might find language-related books of interest in my reviews archive.

If you read this blog on its web page (as opposed to via email, say), you may have noticed a new image in the sidebar, and a new page, linking to the Sentence First shop. It now has a .com address only; I closed the .ie page for simplicity’s sake.

The shop has bags, T-shirts, hoodies and other clothes, badges, mugs, and more. Its general themes are wordplay, language, and bad puns. Omit needles swords, for example, is a spin on Strunk and White’s popular dictum Omit needless words. Less cryptic ones include:

I’ll be adding more from time to time.

If you want some item that isn’t shown, email or tweet me or leave a comment below, and I’ll see what I can do when time allows. Other feedback will be happily received; cries of “capitalist sell-out” are also permitted.

Spreadshirt, the shop’s host, has a special offer from today, Tuesday 10 September, till a week from now – free standard shipping when you buy two or more items. Just use the voucher code FALL2013.

I have two new posts up at Macmillan Dictionary Blog, excerpted below.

The unreality of real estate language was prompted by the amusing hyperbole of property ads, where ordinary lawns are “magnificent”, rooms are “filled with natural light”, and dreams lie forever on your doorstep. It is a world where

medium is ‘large’, average is ‘first rate’, and unusual is ‘extraordinary’. Any site that isn’t a ruined shack sinking into a swamp may be described as ‘superb’. A well-maintained building is ‘stunning’ and ‘fabulous’, a better-than-average view ‘must be seen to be believed’, and everywhere but the most dilapidated neighbourhoods are in a ‘most sought after location’. (Hyphens, unlike typos, are often scarce in these ads.)

The comments offer such phrases as “deceptively spacious” and “compact and bijou” as further examples of this less-than-reliable repackaging of reality. You can read the rest here.

Apologies are being expressed – or are they? examines the possible differences between saying “I’m sorry” and “Apologies” (and variations thereon):

Authentic remorse tends to be effectively communicated so long as sincere effort is made through tone, gesture, penitent behaviour and so on. But the words, as an explicit admission of wrongdoing or shortcoming, can be an important part of reconciliation. . . .

Because it omits the subject, ‘Apologies’ is somewhat disembodied and abstract, a bit like saying ‘Mistakes were made’ instead of ‘I/We made a mistake.’ It can be personalised, for example as ‘My (sincere) apologies’, but this feels formal – at least to me – whereas ‘I’m sorry’ does not. Omission of the subject is why the passive voice is not best suited to apologising . . .

It’s a very subjective area, of course, and “I’m sorry” can be as sarcastic as “Apologies” can be sincere – which is partly why it’s so interesting. The comments from other people helped to develop the discussion beyond my hunches and experiences. I didn’t use corpus data in arriving at my cautious conclusions – for which, my apologies.

This ad in the local freesheet Galway Advertiser caught my eye. I was interested not in the reconditioned washing machine but in the reconditioned adjective that begins the ad. Preloved (or pre-loved) is apparently a very popular euphemism for pre-owned or second-hand, but I don’t remember remarking on it before. How old is it, I wonder?

Preloved doesn’t appear in many dictionaries, with or without a hyphen. Collins English Dictionary, quoted at Dictionary.com, says it’s informal Australian, while Wiktionary has a few examples of its appearance in the wild – well, books and newspapers – modifying cars, homes, tuxedos, and tables.

Browsing Google Books, and ignoring poetical and philosophical contexts, I came across the phrase preloved clothes in Women, Sex, and Pornography (1980) by Beatrice Faust. Looking further, I saw it mentioned in a collection of William Safire’s On Language articles: by advertising “pre-loved Oriental carpets”, a dealer in Philadelphia came second place in Safire’s 1979 Language Prettification and Avoidance of Ugly Reality Awards. (First place went to “experienced cars”.)

Safire’s award suggests that preloved in the second-hand sense might have been fairly new in the late 1970s, at least in U.S. English. (I found no hits in the British National Corpus.) Continuing my casual dig, I soon found an example from 1976, in volume 25 of Chicago from WFMT radio station: “We have several pre-loved Mercedes-Benz automobiles for sale.” It appears to be an ad or blurb, and it assures us that

owning a Mercedes-Benz is somewhat akin to being in love. You shun automatic car washes in favor of doing it yourself. The right way.

I see. Then, in an old Mayville telephone directory (seen on Google Books), there appeared this ad for “new & pre-loved homes”:

That’s from 1975. Lexicographer Kory Stamper was kind enough to take a quick look in Merriam-Webster’s files, and dated it to 1975 too (pending a closer look). Let me know if you find an older example.

For what it’s worth, I don’t much like the term. Loving something doesn’t mean it’s in good condition, and total neglect might leave something as good as new. What’s wrong with second-hand?