END_OF_DOCUMENT_TOKEN_TO_BE_REPLACED

Look at the cut of this Irish expression

Growing up in rural Ireland, I regularly heard – and still occasionally hear – some version of the phrase the cut of someone. It’s an informal idiom that means the state or appearance of someone and usually incorporates criticism or amusement or both. Here’s an example I just read in Deirdre Madden’s novel Nothing Is Black:

‘Look at the cut of me!’ Claire’s mother had said the last time she’d visited her. She’d been sitting by a mirror, combing out her faded hair. ‘I’m as grey as a badger. How come I look so old, yet I feel no different to what I was forty years ago? Where’s the sense in that?’ She’d started to laugh …

In Irish literature the expression is generally found in dialogue or in vernacular narrative. Madden’s example is typical in a few ways: it’s light-hearted, colloquial, and deprecatory – in this case self-deprecatory. In a similar vein, the next two examples involve mirrors. Marian Keyes, Anybody Out There:

END_OF_DOCUMENT_TOKEN_TO_BE_REPLACED

On foot of an Irish idiom

In a comment on my post about 12 Irish English usages, Margaret suggested that I write about the Irish expression on foot of. It was a good idea: the phrase is not widely known outside Ireland and is therefore liable to cause confusion, if this exchange is any indication.

On foot of means ‘because of’, ‘as a result of’, or ‘on the basis of’. T.P. Dolan’s Dictionary of Hiberno-English offers the example sentences ‘On foot of this, we can’t go any further with this deal’ and ‘On foot of the charges, he had to appear in the court’.

These lines suggest it’s a formal phrase, and that’s invariably how I see it used; I’ve yet to hear it in everyday conversation. A search on Google News shows that it’s common in crime reporting in Ireland. I also see it in academic and business prose, an impression confirmed by the example sentences in Oxford Dictionaries, e.g.:

END_OF_DOCUMENT_TOKEN_TO_BE_REPLACED

Passing through the pleasingly named town of Gort on my way to the Burren recently, I popped in to a second-hand bookshop and picked up a couple of Brian Moore books I hadn’t read: Catholics and The Doctor’s Wife. Everything I’ve read by Moore has been time well spent, yet most people I ask have not read him, and many have not heard of him. 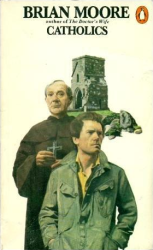 Catholics (1972) is more novella than novel, around 80 pages long in my Penguin paperback edition. Work won’t allow a single-sitting read today, so I’m taking bites from it on my breaks. The title is straightforwardly descriptive: a young American priest is sent from Rome to a remote island off the west coast of Ireland, where old and new Catholicism square up against each another.

The young priest, Kinsella, has just landed on the island – the first time it hosted a helicopter – and meets with the presiding Abbot in a large parlour. Sitting on rough furniture carved by the local monks, with Atlantic light streaming in through a 13th-century window, they enact a ritual within rituals:

END_OF_DOCUMENT_TOKEN_TO_BE_REPLACED

Irish people are known for having a way with words. Sometimes it’s true and sometimes it isn’t, but either way we first need the words to have a chance of having our way with them. And some words, like amn’t and fooster, are distinctive and beloved features of the dialect.

The post title exaggerates a little: by words I mean words or usages, and some of the items below appear in other dialects too. But all are characteristic of Irish English (aka Hiberno-English), whether integral to its grammar or produced on occasions of unalloyed Irishness.

Each entry links to a blog post all about the word or usage in question, so click through if you want more detail on pronunciation, etymology, examples, variations, and so on. Off we go:

1. Plámás is an Irish word borrowed into Irish English meaning ‘empty flattery or wheedling’. It’s sometimes used witheringly in reference to political speech, for some reason.

2. Sleeveen is more strongly political, a scathing phonosemantic word for a sly, smooth-tongued operator who will say anything to advance their private agenda. Again it’s from Irish, anglicised from slíbhín.

3. Amn’t, short for am not, is a national grammatical treasure. Though criticised by prescriptivists, it’s common throughout Ireland, and, in interrogative syntax, is more logical than the standard but irregular aren’t I.

4. Notions in Ireland means either amorous behaviour, sexual inclinations; or pretentious affectation, ideas above one’s station. Pray that you interpret it right if you hear it.