Anyone who’s into both word lore and science fiction will have a fine time exploring the Historical Dictionary of Science Fiction. Call it cyberspacefaring.* Launched in early 2021, the HD/SF was once an official project of the OED but is now run independently by lexicographer Jesse Sheidlower. A work in progress, it aims to:

Definitions are ‘comprehensive but brief’ and are supplemented by ample literary quotations, aka citations. These, ‘the most important part of this dictionary’, show each word or phrase in use, from the earliest detected case to more recent examples. Some entries also have etymologies, usage labels, historical notes, and so on.

This beautiful retrofuturist typeface is Sagittarius by Hoefler&Co. –
see the link for an account of its inspiration and development.

END_OF_DOCUMENT_TOKEN_TO_BE_REPLACED

Verb all the things

Lauren Beukes’s novel Broken Monsters has a short passage on business jargon and young people’s attitudes to it. Layla, a character in her mid-teens, is visiting her friend Cas and introduces Cas’s father:

Her dad is a tech-preneur. Name a major company in Silicon Valley and he’s ‘pulled a stint there’ – his words. It’s why they moved from Oakland, California. Detroit is friendlier to start-ups: lower overheads, tax incentives, hungry talent, cheap office space in TechTown. He’s bought into the city’s revitalization ‘with bells on’. Layla loves hearing him talk. It’s another language, where any word can be verbed. She and Cas have a secret drinking game they play during dinner, taking a sip of juice every time he uses techno jargon like ‘angel-investor’.

‘How’s Crater going?’ Layla asks him, trying to remember the name of his big start-up project.

Some examples certainly qualify as tech jargon or terminology: the portmanteau tech-preneur and the fictional brand Curatr, with its fashionably dropped vowel (cf. Flickr, Tumblr, Grindr, Qzzr). TechTown, meanwhile, is a real-life hub for entrepreneurship in Detroit, notable in this context for its CamelCase style.

Other examples cited – pulled a stint, with bells on, angel investor – are not what I’d consider tech jargon, but the passage is from Layla’s pov, so I figure it’s more that she has only heard these phrases from Cas’s dad and associates them with his industry.

Her observation about verbing applies to English more generally.

All words may be verbed. Contrary to popular belief, there is nothing wrong with this.

But I suppose the point is that tech execs (and managers, advertisers, etc.) are more likely to do it with abandon, and that when you’re a teenager and it’s your dad or your friend’s dad, it can be a particular source of interest, embarrassment, or entertainment.

It’s refreshing to see this form of language, so often maligned, portrayed positively. I’m reminded of a cartoon by Dana Fradon included in The New Yorker Cartoon Album 1975–1985: 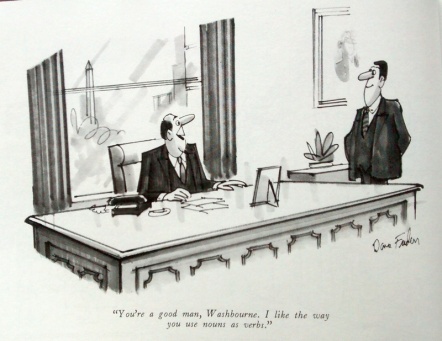 [Caption: “You’re a good man, Washbourne. I like the way you use nouns as verbs.”]

END_OF_DOCUMENT_TOKEN_TO_BE_REPLACED

Jargon and slang get a bad press. In the right contexts, though, they serve an important communicative purpose, at the same time allowing users to express their identity as part of a community – and to have fun with language while doing so.

Any specialised activity accumulates its own vocabulary, born of the particular actions, situations, equipment, and people involved. These lingos occasionally leak into other domains, or even the mainstream, but for the most part they remain more or less constrained or hidden, niche terminologies available only to the tribes in question.

In her new book Dent’s Modern Tribes: The Secret Languages of Britain, Susie Dent presents a host of these distinct lexicons for wider appreciation. As well as being a lifelong word lover, Dent is an unabashed eavesdropper, ear always poised for scraps of idiosyncratic interaction. That method, combined with straight-up interviews and chats, has yielded a wealth of material from a great variety of human professions and hobbies: cab drivers and cricketers, actors and anglers, soldiers and spies, roadies and ravers, firefighters and freemasons, teachers and (of course) trainspotters – dozens in all, each a rich source of verbal codes and curiosities.

These lexicons bundle history aplenty. For example, ever since Churchill, as UK home secretary, gave black-cab drivers the right to refuse a fare while eating, cabbies have referred to a meal as a Churchill. A slow period for taxis is called kipper season, ‘apparently from the days when cabbies could only afford to eat kippers’. Other terms are derived from more immediate sources: among cabin crew members a slam-clicker is, echoically, one who ‘goes straight to the hotel on landing and doesn’t emerge again until it’s time to leave’.

END_OF_DOCUMENT_TOKEN_TO_BE_REPLACED

I picked up this Richard Stark novel in a local second-hand bookstore and was attracted by the reviewers’ descriptions of its main character (click the photo to enlarge). Funny how repulsive can have a contra-semantic effect. The ‘unforgettable Parker’, it turned out, is the same one played by Lee Marvin in John Boorman’s 1967 film Point Blank. Sold!

The Rare Coin Score has one stylistic detail I want to analyse here. Parker, Billy, Claire and Lempke are in a backyard planning a heist of rare coins. Parker, the ‘supreme bastard’ protagonist, has suggested a shortcut in packing the loot. Billy, a rare-coin specialist, explains why it wouldn’t work (note: he’s holding a spatula because he’s barbecuing burgers):

‘You take valuable coins,’ Billy said, gesturing with the spatula, ‘you just drop a lot of them in a canvas sack, carry them off someplace, dump them out on a table, you know what you’ve done?’

‘You’ve lowered their value,’ Billy told him, ‘by maybe twenty-five per cent. Coins are more delicate than you might think. They rub together, knock together, the value goes right down. You go from unc to VF just like that.’